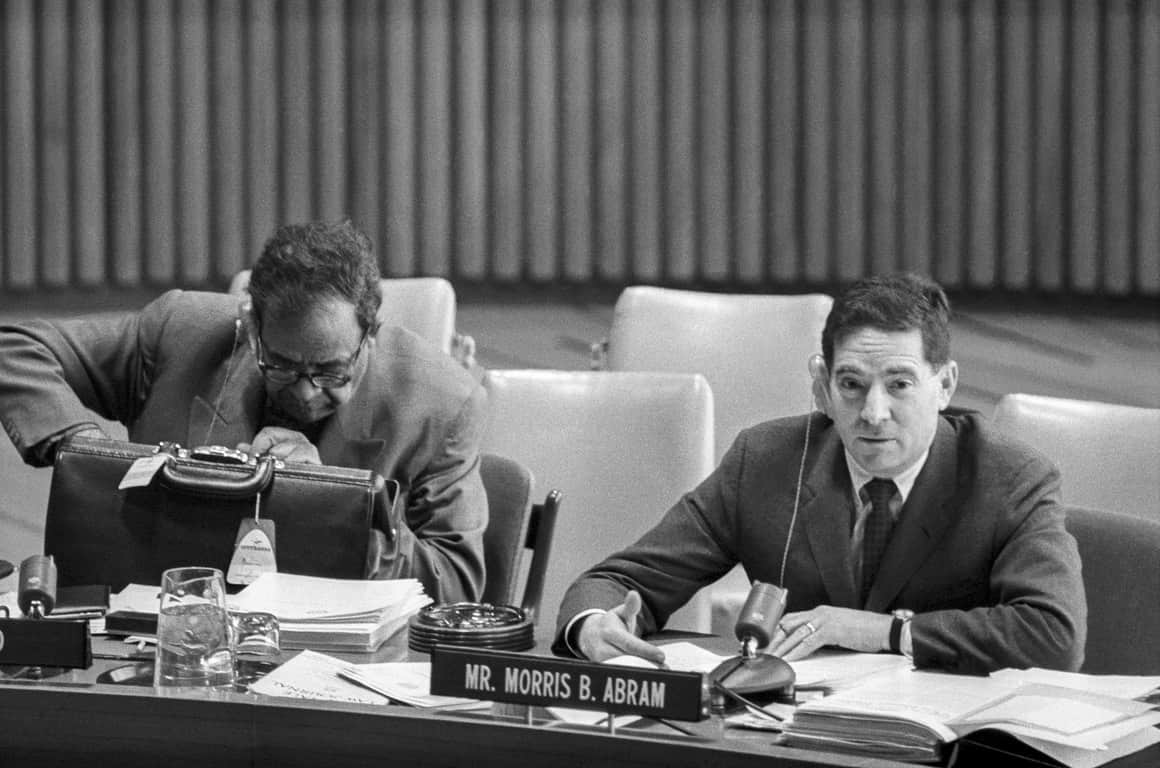 UN Watch founder Morris B. Abram, expert member of the United Nations Sub-Commission on Prevention of Discrimination and Protection of Minorities, addressing the world body on January 15, 1964, when the world body voted to endorse Abram’s draft of the International Convention on the Elimination of All Forms of Racial Discrimination, which UN Watch upheld in its appearance at the UN this week.

GENEVA, August 15, 2019 — On the conclusion of the first examination of the Palestinian record on racism by the UN’s Committee on the Elimination of Racial Discrimination (CERD), UN Watch commended the 18-member expert body for asking the representatives of President Mahmoud Abbas to explain the prevalence of of antisemitism in Palestinian textbooks and the mistreatment of minorities in Palestinian-controlled areas.

UN Watch’s founder, civil rights leader Morris Abram, was a key drafter of the committee’s core document, the convention to eliminate racism, when he served as a UN expert in the 1960s. A new book to be published in December, “Touched with Fire: Morris B. Abram and the Battle against Racial and Religious Discrimination,” recount this history.

Ahead of the panel’s findings and recommendations due on August 29th, UN Watch Executive Director Hillel Neuer issued the following statement:

“What happened this week was unprecedented. Since 1974 when Yasser Arafat and the PLO were welcomed into the United Nations, this if the first time that the world body’s spotlight was officially placed on Palestinian racism, discrimination and antisemitism.”

“Importantly, several committee experts used our materials to ask serious questions of the Palestinian delegation. Sadly, despite their signing of UN treaties, the Palestinian side failed to show any sense of accountability, instead repeatedly pointing the finger at Israel as an excuse. The Palestinians declined to explain why, for example, their newspapers and websites publish grotesque caricatures of Jews that look straight out of Der Sturmer.”

“UN Watch trusts that the committee’s findings will not be influenced by the Palestinian attempt to politicize the review session, and by their transparent strategy of deflection, and that it will instead apply real scrutiny to Palestinian laws and practices, pressing them to curb some of their most virulent forms of racism and antisemitism.”

“Astonishingly, while dozens of EU-funded Palestinian NGOs routinely address UN sessions on Israeli actions, and submit voluminous reports, not a single one of these groups submitted a report at this week’s first-ever UN review of the Palestinians’ record on racism. Only one, Al Haq, showed up at the last minute, possibly to mitigate this embarrassment. The effective boycott by these groups of a UN meeting on Palestinian human rights was the elephant in the room that no one dared to mention.”