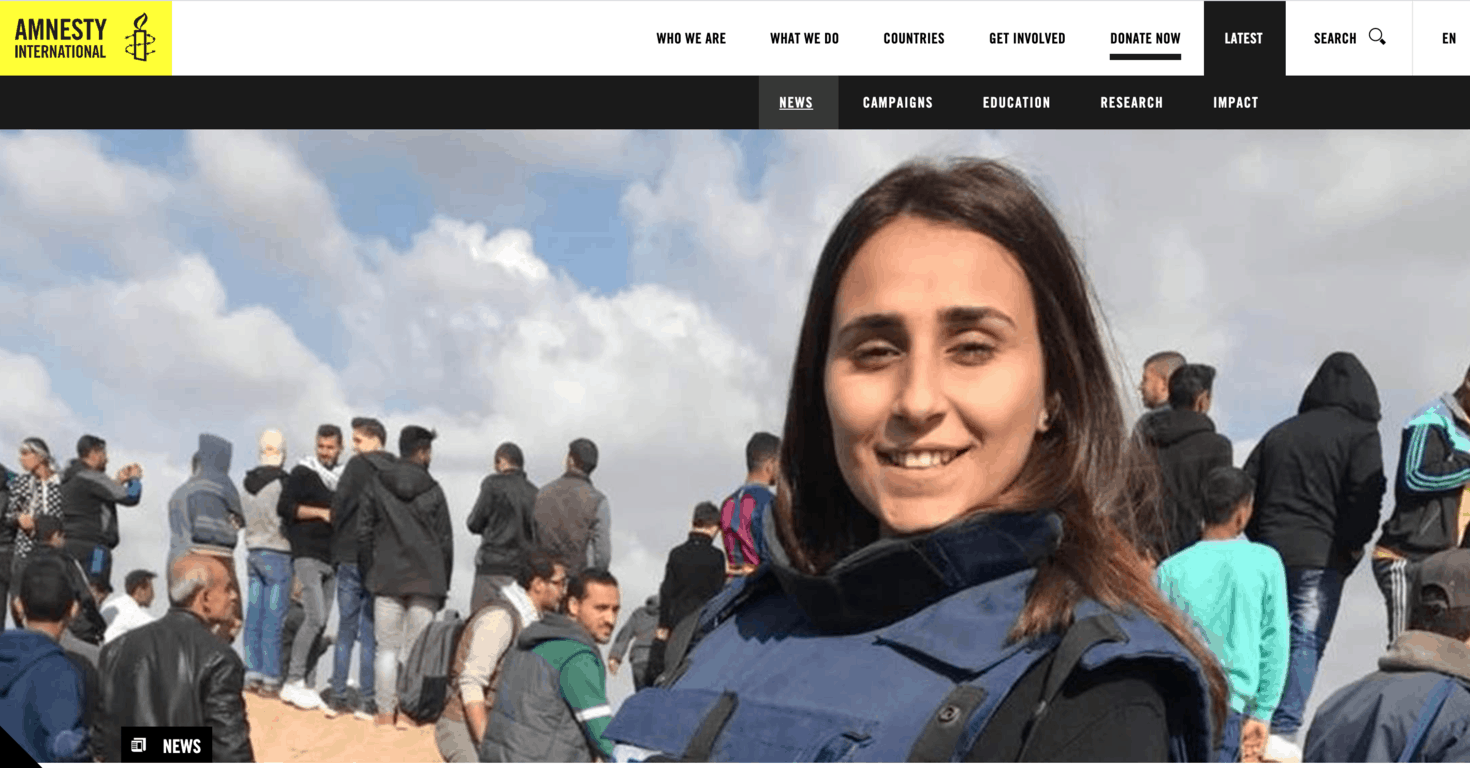 GENEVA, April 12, 2020 — Amnesty International is being asked to fire a Gaza researcher after the New York Times reported that she got Hamas to arrest a Palestinian peace activist for holding a Zoom call with Israeli peace activists.

Gaza Youth Committee leader Rami Aman, 38, who organized the peace dialogue, has not been heard from since he surrendered Thursday morning at Hamas Internal Security headquarters in Gaza City, a family member said late Friday afternoon.

According to the Times, Hind Khoudary, who is described by the London-based human rights organization  as an “Amnesty International Research Consultant” and “worker”, “posted angry denunciations on Facebook of Mr. Aman and others on the call, tagging three Hamas officials to ensure it got their attention.” Then Hamas arrested him for “betrayal of our people and their sacrifices.”

In wake of the controversy this weekend, at about 1:00 am Gaza time on April 12th Khoudary deleted the Facebook post where she had tagged the Hamas officials. Here is the screenshot: 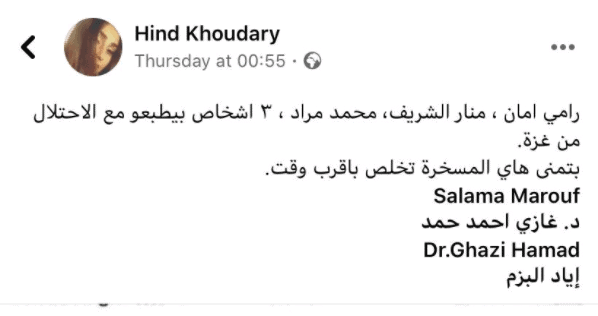 See some of Khoudary’s numerous other Facebook posts from that day denouncing Aman here, here and here.

Even long-time Human Rights Watch official Peter Bouckaert, who always sided with Hamas in its wars with Israel, has condemned Amnesty International’s researcher, and removed her from a private Facebook group.

“You should be ashamed of yourself,” Bouckaert wrote to Khoudary.

Being ashamed of myself for fighting normalization with Israel? pic.twitter.com/GSYrmmAVAV

It is disgusting that a so-called ‘journalist’ got an activist for dialogue arrested by Hamas. Hind was in a journalist group I run on Facebook and I kicked her out immediately. Conflicts are resolved through dialogue and understanding, not hatred. Feel free to disagree with me, I need to free up some friend space! You make peace with your enemy, not your friends.

It is disgusting that a so-called ‘journalist’ got an activist for dialogue arrested by Hamas. Hind was in a journalist…

Al-Bozom then called the activist’s peace dialogue a crime, saying it amounted to the “betrayal of our people and their sacrifices.”

“A human rights group cannot employ an accomplice to Hamas terror, someone who causes peace activists to be jailed and probably tortured, all because they engaged in dialogue. Amnesty should explain why they hired her in the first place, and why before that they had cited her as a supposed journalist,” said Neuer.

“It’s clear from her social media posts that Khoudary has been a long-time and open supporter of both Hamas and Hezbollah acts of terrorism against Israelis. Amnesty must conduct an independent inquiry into who at the organization knew of Khoudary’s support for terrorist violence.” 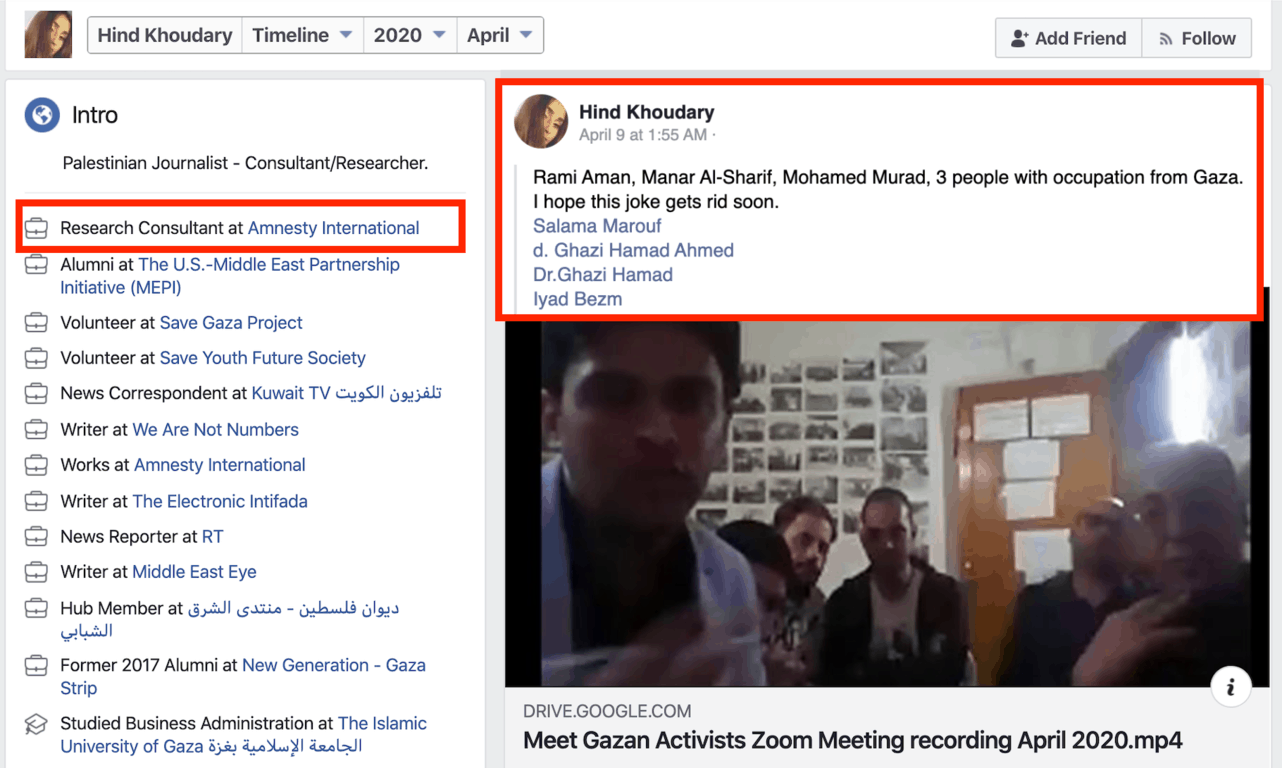 Why do you employ enemies of human rights and peace?https://t.co/86taQL1mWL

Amnesty International's Research Consultant Hind Khoudary on Thursday got Hamas to arrest & imprison a Gaza peace activist for having a Zoom call with Israeli peace activists. In her latest tweet, she summarizes the human rights group's policy rather well. https://t.co/7OKyzo3cGR https://t.co/VU59XZqgDF