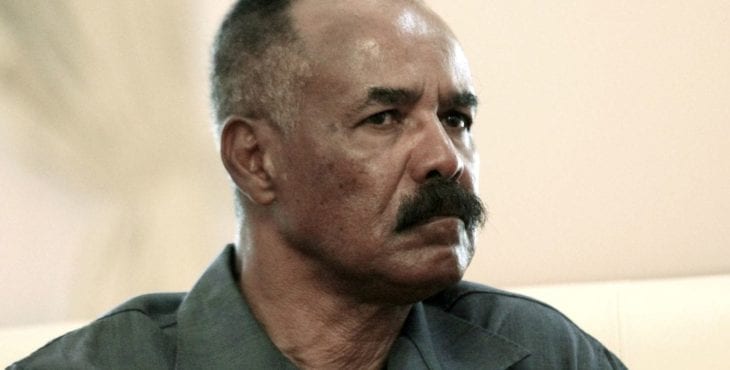 Above: President Isaias Afwerki, dictator of Eritrea since 1993

Eritrea’s bid for a seat on the UN’s top human rights body should be rejected, as it fails to meet the basic membership criteria. The election of 18 new countries to the Human Rights Council will be held at the UN in New York tomorrow, October 12, 2018. See our full report on all candidates, and press release.
“Electing the heinous Eritrean regime as a UN judge on human rights is like making a pyromaniac into the town fire chief,” said UN Watch executive director Hillel Neuer.
Eritrea’s Human Rights Record
Eritrea commits serious human rights violations, including:

Discussion
Eritrea is an authoritarian regime ruled by President Isaias Afwerki, head of the country’s sole political party—The People’s Front for Democracy and Justice (PFDJ). Eritrea has not held national elections since it became independent from Ethiopia in 1993.[1] Though the constitution, ratified in 1997, calls for an elected 150-seat National Assembly, this assembly has not met since 2002.[2] Any opposition groups must operate from abroad, as the PFDJ is the only legally recognized political party in Eritrea.[3]
Eritrea is the subject of an annual Human Rights Council resolution condemning “in the strongest terms the reported systematic, widespread and gross human rights violations” committed by the government in a climate of “generalized impunity.”[4] The resolution itemizes numerous human rights abuses including: arbitrary detention, torture, lack of democracy and free press, and indefinite military or national service. In her recent report, Sheila Keetharuth, the Special Rapporteur on Eritrea criticized the Eritrean government for having “shown little willingness that it would tackle such [human rights] abuses.”[5]
According to the UN Commission of Inquiry on Eritrea, Eritrean government forces have committed, inter alia, arbitrary arrests, enforced disappearances and incommunicado detention, arbitrary killings, and torture on a wide scale with impunity since independence, and these abuses constitute crimes against humanity.[6] Detainees are routinely subjected to various forms of torture and harsh treatment, and many die in custody. [7]  Those targeted by the government for such abuses include army and national service evaders, political opponents, and members of certain ethnic and religious groups.[8]
Eritrea does not have freedom of the press.[9] All independent media outlets were shut down in 2001 in a government crackdown in which seven independent newspapers were closed and many journalists were arrested.[10] One source reports that fifteen of these journalists are still in prison.[11] Another source reports that at least seven of the journalists died in custody.[12] Human Rights Watch has called Eritrea “one of the leading jailers of journalists in Africa.”[13] The Special Rapporteur on Eritrea has documented more than 90 arrests of journalists in Eritrea since 1997, including two arbitrary arrests in April 2018.[14] Access to the internet is also extremely limited.
Eritrea does not recognize the right to freedom of assembly with past protests ending in mass arrests.[15]
Eritrea also does not respect freedom of religion. The government recognizes only four faiths (Islam and three strands of Christianity), and those who practice any other faith risk arrest and detention.[16]
In May 2017, news sources reported that 170 Christians were arrested in a government crackdown on unrecognized faiths. Among those arrested were some 30 young mothers being held at the notoriously harsh prison Nakura, while approximately 50 of their collective children were left behind without a parent.[17]
In March 2018, Eritrean authorities arbitrarily arrested hundreds of people for protesting the death in custody of the 93 year-old Haji Musa Mohamednur, former director of an Islamic school, for refusing to carry out government orders. The government carried out similar mass arrests when Mohamednur was arrested in October 2017.[18]
Eritrea has used its war with neighboring Ethiopia as an excuse to create a militarized state, and to exploit its citizens through forced conscription into the military or national service.[19] Though the law only requires 18 months of service, in practice many are forced to remain in the military or national service for longer periods — and sometimes forever — under threats of detention, torture or punishment of their families.[20] These Eritreans work for nominal pay and are denied the freedom to resign, take other employment, or freely travel, and often are denied promotions and salary increases.[21] Anyone attempting to escape this fate risks arbitrary arrest, torture, and/or execution. Eritrea has become notorious for its policy of shooting to wound or kill Eritreans attempting to flee the country.
Furthermore, several UN human rights mechanisms, including the COI on Eritrea and CEDAW, have expressed concern over widespread sexual violence against women and girls in Eritrea’s military training camps, including rape and forced sexual slavery.[22]
Eritrea’s UN Voting Record
Negative: At the General Assembly, Eritrea backed human rights abusers through a resolution denying the right to sanction such regimes, and by voting to delay the work of the Special Rapporteur on violence against LGBT. Eritrea abstained or did not vote on resolutions that spoke out for victims of human rights abuses in North Korea and Myanmar, and voted against resolutions speaking out for human rights victims in Iran and Ukraine.