Rare good news: Thanks to UN Watch’s relentless campaign, UNRWA teachers are now complaining that they are unable to glorify Hamas terrorists on social media, or incite hatred and violence towards Jews and Israelis.

The article below from the anti-Israel Electronic Intifada website, “UNRWA stifles employee speech on Palestinian rights,” reveals how UN Watch’s reports exposing the antisemitism of UNRWA teachers have caused the U.S., Canada and other Western donor states to pressure UNRWA to stop the antisemitic hatred promoted by their teachers.

Much more work needs to be done. But the achievements revealed by this article underscore why we at UN Watch refuse to give up. 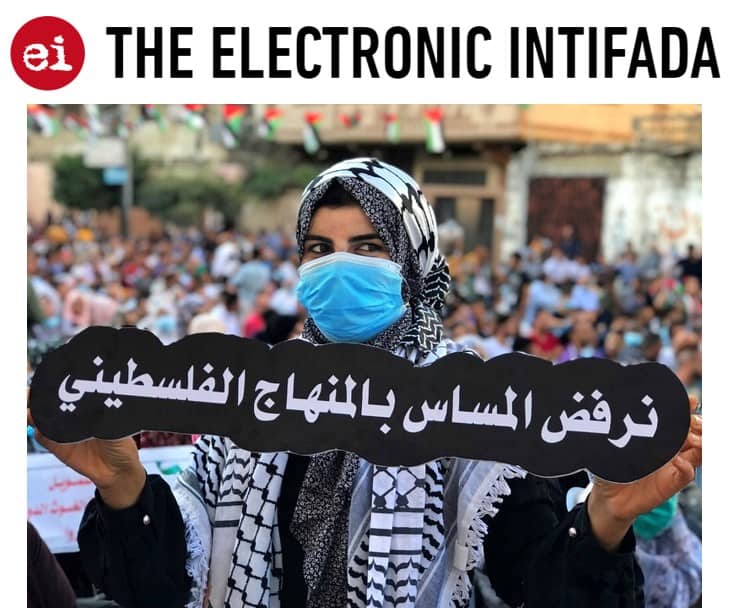 Since starting as an English teacher four years ago with the United Nations Relief and Works Agency for Palestine Refugees, UNRWA, Ahmed has found himself unable to freely publish stories or express his opinions online about Palestine and Israel’s occupation.

“I used to publish stories for some international websites,” Ahmed, 28, told The Electronic Intifada, citing Mondoweiss [a virulently anti-Israel blog] among other online news sites that published his work.

Like other UN staff interviewed for this article, Ahmed did not want to give his real name and the first name here is an alias.

“I also used to express my support for the Palestinian resistance through Facebook, especially during the previous three Israeli attacks on Gaza and in many other events in all Palestine.”

After his employment with UNRWA began, however, Ahmed said he was effectively silenced.

And today, UNRWA, perennially underfunded, is under increasing scrutiny from international donors.

So intense has the oversight become, Ahmed said, that he is thinking about deleting all his social media accounts in case he simply can’t restrain himself in the future.

In July, the UN agency tasked with catering to the needs and rights of Palestinian refugees signed an agreement with the U.S., conditioning American financial assistance on a number of variables including the behavior of staff in UNRWA facilities and on social media.

Shortly after in August, the pro-Israel group UN Watch — whose main purpose seems to be to attack UN bodies for any alleged bias against Israel – accused 22 UNRWA employees of online hate speech.

The agency then suspended and launched an investigation into 10 employees.

It’s had a chilling effect.

“I cannot express my frustrations about current events in Jerusalem, the West Bank and even on the last Israeli onslaught on Gaza,” said Ahmed.

For the same reason, he is also unable to participate in any national events and political activities or even to express his support for any of the Palestinian factions.

“As long as I am working in this agency, I am forced to stop myself from likes, shares, or creating posts on any political issue, fearing for my job,” Ahmed told The Electronic Intifada.

Married two years and with a baby son, Ahmed is acutely aware that he is unlikely to find a better paid job than with UNRWA because of the disastrous state of Gaza’s economy.

One of Ahmed’s colleagues was one of the 10 suspended from work due to posts supporting the Palestinian resistance during the recent Israeli war on Gaza.

“Every time I want to express my thoughts on current events in my country through social media, I remember what happened to my friend and stop myself,” he said.

In announcing the investigation into its own employees, UNRWA said the 10 employees were suspended from work due to allegations that they had “engaged in non-neutral” behavior.

On its website, UNRWA defines neutrality as an undertaking that “humanitarian actors must not take sides in hostilities or engage in controversies of a political, racial, religious or ideological nature.”

UNRWA employees, in other words, under a strict interpretation of this principle, are deprived of their right to freedom of expression and their ability to participate politically regarding the Palestinian-Israeli conflict through social media.

In the past, this has meant employees’ political affiliations were taken into account.

Now, a much stricter interpretation is taking hold.

August’s UN Watch report accused more than 100 agency employees, going back to 2015, of ”promoting violence and anti-Semitism” in classrooms and on social media.

UN Watch specifically named 22. Embarrassingly, however, UNRWA subsequently determined that of those, only 10 were actually among the agency’s 28,000 employees.

The 10 have been suspended with pay pending the result of the investigation, UNRWA spokesperson Adnan Abu Hasna told The Electronic Intifada.

The agency “attaches importance to the principle of neutrality, which is important to ensure the flow of funding from donors all over the world,” he said.

But union representatives are unhappy with the way UNRWA is interpreting its rules.

Muhammad Shuweideh, with UNRWA’s employee union, condemned the measures taken under the pretext of neutrality, which he called a “broad term with various interpretations.” The agency “lacks clear standards of this concept,” he said, to use it against its employees.

He argued that the agency itself, by interpreting neutrality in this way, was itself no longer being neutral. Instead, he said, UNRWA was infringing on employees’ rights for the sake of Israel.

In addition, he charged, there have been changes made to school curricula that directly undermine Palestinian history and rights otherwise enshrined under international law.

These include, he told The Electronic Intifada, efforts to omit descriptions of 1948 Palestinian villages and towns, avoiding any reference to Jerusalem as the capital of Palestine, as well as silencing discussions around concepts such as the right of return and the right to resist.

And he is not the only one to see the suspensions as evidence that UNRWA is, wittingly or otherwise, colluding with Israel against Palestinian rights.

Head of the Gaza-based International Commission to Support Palestinians’ Rights, Salah Abdalati, condemned the suspensions and said the July US-UNRWA agreement was a dangerous development for Palestinian rights.

In 2018, the administration of Donald Trump ended US funding – by far the largest contribution of any single state – for the agency. Abdalati said the Biden administration has exploited negotiations to restore some funding for UNRWA to extract concessions from the agency, hence the suspensions.

Accusations that the Palestinian curriculum incites hatred are really about ending any talk of resistance or the right of return, he said. The right of return of Palestinian refugees is sanctioned by general refugee rights as well as a number of UN resolutions starting from UN General Assembly Resolution 194 in 1948, he pointed out.

It is “very dangerous” to link US funding to political conditions, though Abdalati pointed out that this is something successive US administrations have been working on for years by forcing a gradual reduction of UNRWA services.

Submitting to such conditions, he said, “runs counter to UNRWA’s principles of independence and neutrality.

Gaza’s difficult economic situation has left UNRWA employees at the mercy of the agency. With few job prospects and poverty looming, staff are reluctant to risk one of few reasonable sources of livelihood in the impoverished coastal strip.

Salma, 33, has worked as a science teacher in UNRWA schools for three years.

She left her work in Gaza’s public school system for the UN’s better pay rate in order to provide for her family’s needs. And in those years, she has managed to pay off her debts, save money for an apartment and provide for a family of six.

But it has come at a cost.

“People have envied me my salary,” she told The Electronic Intifada. “But they don’t know how humiliated I feel.”

“This agency, which should defend our rights, instead controls me. I’m forced to stay silent about politics and away from any national activities to keep my job.”

Salma has become inactive on social media. Likewise, many of her colleagues have deactivated their social media accounts or created fake ones. Like Salma, they also fear talking about the Palestinian cause or against UNRWA’s policies inside their schools.

“We fear even protesting the policy,” Salma said. “This was my dream job. It’s become a nightmare.”

In recent years, a number of UN employees have been forced to resign, including Suhail al-Hindi who was the former head of UNRWA’s employee union. He was effectively pushed out in 2017 after the agency learned that he was affiliated with the Hamas movement.

Al-Hindi, now chairman of Gaza’s professional associations, has no regrets though.

“I didn’t feel sorry for the loss of a job that cancels the identity of UNRWA employees,” he told The Electronic Intifada.

“I cannot be separated from my cause. My job won’t get me back to my homeland. Staying faithful to my right of return and right to resist is what will get me back.”

Khuloud Rabah Sulaiman is a journalist living in Gaza.

PrevPreviousUN Watch in the News — November 2021
NextThe Top 10 Worst U.N. Actions of 2021Next