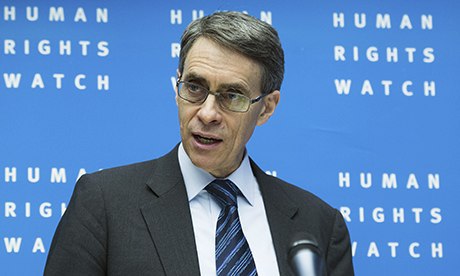 June 16, 2014
GENEVA – Unlike the UN secretary-general and the International Committee of the Red Cross, the head of Human Rights Watch is refusing to unequivocally condemn Thursday’s kidnapping of Israeli teenagers, emphasizing instead that they attended school in an “illegal settlement,” and demanding that his critics first condemn an unrelated event from a month ago, the alleged IDF killing of masked rock-throwers.
After repeated appeals from Twitter users for HRW Executive Director Kenneth Roth to end his silence on the abductions, Roth finally responded with this carefully-constructed tweet: “Attending school at illegal settlement doesn’t legitimize apparent kidnapping of Israel teens. They should be freed.” But…. Click here to read more
______________
UN Watch takes the floor at UNHRC plenary, calls out Sudan, Pakistan, Iran for stoning, jailing, targeting women

UN Watch testimony before the UN Human Rights Council, 26th Session
June 10, 2014
Thank you, Mr. President. . . We wish to focus thematically on violations of women’s rights—in particular, those perpetrated by three members of the UN Commission on the Status of Women, which is charged with protecting the rights of women.

First, Sudan. Last month, Mariam Yehya Ibrahim, a 27-year-old Christian woman, was sentenced to death by hanging, after she declined to profess she is a Muslim, the religion of her father. Sudan charged her with apostasy—and also adultery, for the crime of marrying a Christian.
Mr. President, let the record show that Sudan threw this woman into prison while she was eight months pregnant; that she was forced to give birth in prison; and that she is behind bars together with her 20-month-old son.
If ever there were a prisoner of conscience, it is Ms. Ibrahim. When will this Council take action to protect her?
Second, Pakistan. Two weeks ago, a 23 year-old pregnant woman was brutally murdered for marrying a man against her family’s wishes. A mob of 28—including members of her own family—beat her to death with bricks, in front of the courthouse in Lahore. The police did nothing.
Mr. President, hundreds of women in Pakistan are killed every year in such so-called honor killings. But where is the honor in Pakistani authorities turning a blind eye to these murders?
Finally, Iran. A few weeks ago, journalist Masih Alinejad created a Facebook page where women could post pictures of themselves without their hijab. Now Iran’s state TV has launched a vicious smear campaign against her.
Mr. President, does it make sense that these countries are the UN’s guardians of women’s rights?
Thank you, Mr. President.
______________
Upcoming UN Watch Summit of Venezuelan Dissidents Raises Ire of Caracas
National Assembly President Diosdado Cabello says UN Watch gathering this Tuesday seeks to “discredit” government 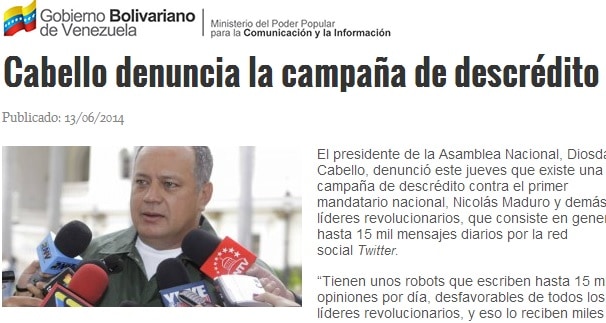 GENEVA, June 15, 2014 –  The head of the Venezuelan parliament was one of several top Caracas officials to lash out at an upcoming UN Watch gathering of Venezuelan dissidents at the United Nations Human Rights Council, where the government’s violent repression of protests is expected to come under intense scrutiny.
The first-ever UN summit of Venezuelan dissidents, which will draw together ambassadors, UN officials, and rights activists, is being organized by the Geneva-based human rights group UN Watch, with the co-sponsorship of Iniciativa por Venezuela, Human Rights Foundation and Directorio. Read More