Advancing Jihadists warn of “account to settle” in Baghdad as 500,000 forced to flee Mosul 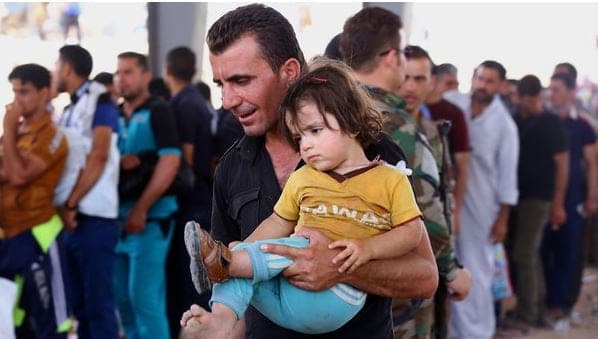 Thousands of residents fled Mosul in northern Iraq after the city was seized by militants belonging to the Islamic State of Iraq and Syria, an extremist group. Uncredited/Associated Press

“If the UN human rights council is truly dedicated to respond effectively to pressing human rights situations — concretely and in real time — then it cannot turn a blind eye to hundreds of thousands of imperiled Iraqi civilians, including vulnerable women and children, who are being forced to flee their homes by the fighting, and as the Jihadists warn of an ‘account to settle’ in Baghdad,” said UN Watch executive director Hillel Neuer.

“Innocent civilians are seeing their fundamental human rights under attack by indiscriminate attacks, arbitrary detention and summary executions from the Jihadists, but also by Iraqi army units who have aimlessly shelled populated areas for days,” said Neuer.

“The High Commissioner for Human Rights should lead states in calling a Human Rights Council urgent session, to take action to remedy the plight of civilians, condemn the attacks which violate international law, and ensure accountability for human rights violators,” said Neuer.

The support of only 16 member states is needed to convene an urgent session. Pillay should follow the example of her predecessor, former rights chief Louise Arbour, who successfully led a call for a session on Darfur in 2006.

In its history since being created in 2006, the council has held some 20 emergency sessions and urgent debates, including six on Israel, four on Syria, and one each on CAR, Libya, Cote d’Ivoire, DR Congo, Myanmar and Sudan. The council also held urgent sessions on Haiti’s earthquake, and two sessions on global food and financial crises. A controversial 2009 session on Sri Lanka praised the regime after it killed 40,000 civilians.

UNICEF reported multiple child casualties when a school in Mosul was directly targeted by mortar fire.

Iraqi Foreign Minister Hoshyar Zebari called the insurgents’ capture of Mosul and other cities “a serious, mortal threat,” and he added: “The response has to be soon. There has to be a quick response to what has happened.”

“The possibility that ISIS will repeat the atrocities it has committed in other parts of Iraq, and impose the same intolerant and abusive rule as it has in Syria, is deeply troubling,” said Nadim Houry, deputy Middle East director at Human Rights Watch.