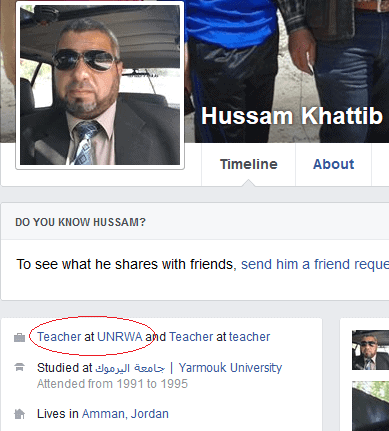 Hussam Khattib, who identifies himself on his Facebook profile as a teacher at UNRWA (above), is seen below in a picture with his students.

On his Facebook page he shared a propaganda video from terrorist group Islamic Jihad, screenshots from which are included below. The focus of the video alternates between a small boy wearing combat dress and an Islamic Jihad bandana, singing the praises of the group’s militants, and clips of rockets being fired at Israel, Israelis mourning their dead, and other illustrations of violence.

Beneath can be found Khattib with his students in Image 1, while Image 2, 3 and 4 show an Islamic Jihad video he has shared.