The UN Human Rights Council concluded its September 2008 session by eliminating the investigative mandate on human rights abuses in Liberia, praising Sudan, and censuring Israel. (For UN Watch interventions at the session, see below.) The council weakened its mandate on Cambodia, and refused to renew the mandate on Sudan for more than six months, a move that opened the door to its eventual elimination. The council’s censure of Israel was its twentieth since being founded in 2006. The 47-nation body has previously criticized North Korea once, and Myanmar four times, but has ignored the UN’s other 189 countries, including the world’s worst abusers. More…

Under a September 18 ruling by the UN Human Rights Council, it is now prohibited to quote Secretary-General Ban Ki-moon’s critique of the council’s special agenda item targeting Israel, during debates held under that item. So ruled Ambassador Elchin Amirbayov of Azerbaijan, vice-president of the 47-nation body, after UN Watch quoted from Ban Ki-moon’s June 2007 statement. During a vitriolic session opened by Archbishop Desmond Tutu, Amirbayov expressed no objections when governments and NGO speakers compared Israel to Nazi Germany, treating each with full parliamentary protocol. But after UN Watch responded, the council vice-president banged his gavel, declined to thank UN Watch, and prohibited any speaker “to put into question the agenda.” On previous occasions, UN Watch quoted Ban Ki-moon’s critique of the council’s biased agenda without incident.  Click for Video

In a session filled with virulent speeches against Israel (see above), Dina Cohen, a 22-year-old mother from the Israeli town of Sderot became the first to testify before the United Nations about life under the constant trauma of daily Hamas rocket attacks.

Cohen addressed the 47-nation council on behalf of UN Watch, in an attempt to bring some semblance of balance to the one-sided session, in a council that has systematically turned a blind eye to terrorism targeting Israeli civilians. The assembly of hundreds of diplomats and human rights activists went silent as Cohen delivered her impassioned speech, unaware that an Israeli victim would take the floor.

Addressing the matter of Durban II, the UN’s so-called “anti-racism” conference set for Geneva in April 2009, UN rights chief Navi Pillay suggested the West was solely to blame for the troubles plaguing the planned world gathering. Iran, Egypt and Pakistan echoed her remarks.

Joining the debate, UN Watch pointed out the distortions of Durban II that give cause for legitimate concerns among Western states and proponents of human rights and the anti-racism cause.

UN Watch Defends Expert Mandate for Darfur
UN Watch called on all UN member states to honour the 60th anniversary of the Universal Declarartion of Human Rights by releasing jailed bloggers, writers and journalists. Even as UN investigator Sima Samar reported to the Human Rights Council of Sudan’s crimes on Darfur — mass killing, sexual violence against women and children, wholesale violation of human rights — Sudan, Egypt for the African group, and other states demanded the termination of her mandate. UN Watch rallied to the defense of the embattled human rights expert.
Click here for video 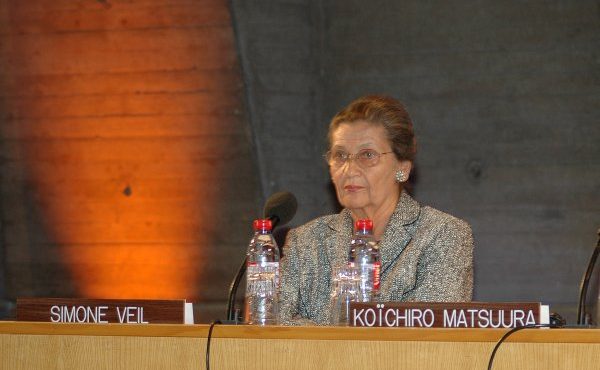 Paris — Speaking before a UN audience, Simone Veil, Holocaust survivor and former president of the European Parliament, urged the international community to prevent a recurrence of the 2001 Durban debacle, where a world conference on racism became a hatefest for demonstrators attacking Israel and praising the policies of Adolph Hitler. She addressed the UN’s recent annual conference of non-governmental organizations, assembled in Paris to mark the 60th anniversary of the signing there of the Universal Declaration of Human Rights,

“In Geneva, we are now starting to look forward to the conference which will follow that of Durban in 2001. May I make an appeal? I would not like there to be the same form of overspill, the same events which occurred in the sidelines of Durban. I know that the international community would condemn that if it were to recur.” More… 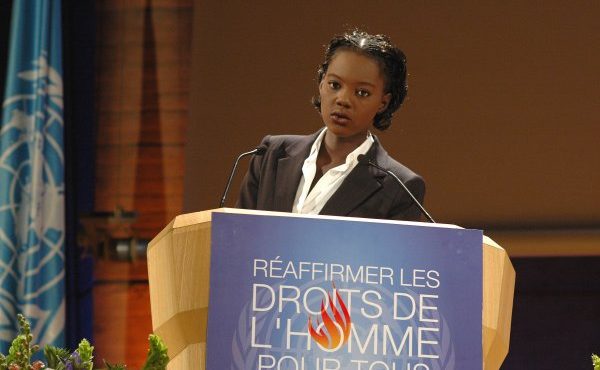 Speaking on the same podium as Veil, French secretary of state for human rights Rama Yade voiced the strongest international backing yet for the human rights activist who was silenced by the Human Rights Council for daring to mention Islamic Sharia law.

Showing more courage and candor than any other European official to date, Yade said that “certain governments would like certain forms of slander to be acknowledged as criminal law offences which run counter to the principle of universality upon which human rights are predicated.” She added, “it is very saddening that within the UN Human Rights Council, last June, a speaker of an NGO was censored because he was talking about the stoning of women in countries applying Sharia law. We have to be very determined as to maintaining the universal nature of human rights even if they are mistreated by States who defend a view of things that they themselves describe as cultural.”  More…. 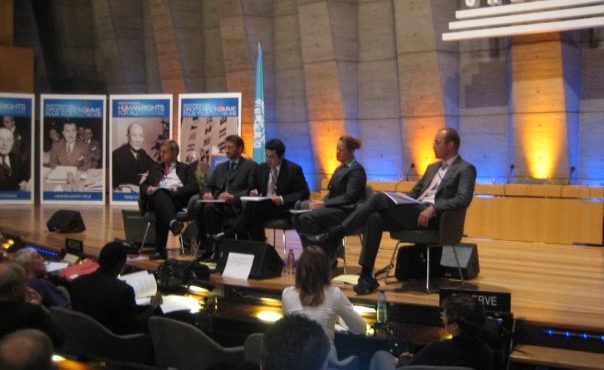 As vice-president of the Geneva NGO Special Committee on Human Rights, UN Watch executive director Hillel Neuer headed an expert panel at the UN’s recent annual conference of non-governmental organizations, assembled in Paris to mark the 60th anniversary of the signing there of the Universal Declaration of Human Rights in 1948. The conference gathered 1,700 NGOs associated with the United Nations for three days of debate.

Neuer chaired a panel discussion on the UN Human Rights Council, co-sponsored by the Conference of NGOs and Pax Romana, featuring Willy Fautre of Human Rights Frontiers International, Peter Prove of the Lutheran World Federation, Paula Schriefer of Freedom House, and Lukas Machon of the International Commission of Jurists.  More…

Geneva, Sept. 19, 2008 — UN Watch and the Global Zimbabwe Forum co-hosted the first NGO debate at the UN Human Rights Council on Zimbabwe’s new deal and its implications for human rights. Chaired by Hillel Neuer, the panel heard from Arnold Tsunga of the International Commission of Jurists, Daniel Molokele of the Global Zimbabwe Forum, and Katinka Ridderbos, a country analyst with the International Monitoring Displacement Center. More…

UN Watch in the Media

“Why is the commissioner aiming her fire at the world’s most tolerant democracies, instead of at racist tyrants like Sudan’s Omar al-Bashir and Iran’s Mahmoud Ahmadinejad who, under the chairmanship of Muammar Qaddafi’s Libya, have already begun to hijack the conference?’ asked UN Watch executive director Hillel Neuer.” — “Pilay urges states to take part in anti-racism conference,” The Press Trust of India, Sept. 9, 2008.

“The threat of Western non-participation remains the only force with the slightest chance of preventing the conference from degenerating into an out-and-out fiasco…” — H. Neuer quoted in “UN rights official urge US, Canada, Israel to join anti-racism meeting,” Agence France Presse, Sept. 8, 2008.

“The threat of Western non-participation remains the only force with the slightest chance of preventing the conference (Durban-2) from degenerating into an out-and-out fiasco…” — H. Neuer quoted in L. Maclnnis “New UN human rights chief calls for racism debate,” Reuters, Sept. 9, 2008.

“…Ms. Pillay must denounce the proposal adopted last week by African states in Nigeria that attacks free speech, singles out Israel, and endorses a text calling for the elimination of Zionism and comparing it to apartheid…” — H. Neuer quoted in B. Avni, “Planned Conference on Racism Raises Concerns at the U.N.,’” The New York Sun, Sept. 5, 2008.

“All of these African victims, and millions more in the future, are harmed by the [African Durban preparatory] conference’s failure to ensure accountability for crimes committed in African countries,’ said Hillel Neuer, executive director of Geneva-based UN Watch.…” — “Africa states to raise Palestinian issue at UN forum,” Reuters, Aug. 26, 2008.

“…The text [the declaration adopted by an African regional meeting] according to UN-Watch’s executive director Hillel Neuer, ‘flouts international human rights principles, and breaches the red lines set by France, Britain, the Netherlands, and other Western states, which they have warned could trigger their boycott of the 2009 meeting in Geneva’.…” — “Africa wants racism, xenophobia to be criminalized,” Agence France Presse, Aug. 26, 2008. Also published in The Herald (Zimbabwe).

“…UN Watch, a Geneva- based independent human rights group that is actively participating as an international non-governmental organisation at the current African Regional Conference in Abuja, Nigeria, is deeply concerned that the draft declaration set for adoption later yesterday threatens to derail this year’s UN follow-up to the 2009 world conference in racism…” — “African Meeting in Nigeria Threatens To Derail World Conference,” Leadership (Nigerian Newspaper), Aug. 26, 2008.

“…More recently we were informed by Hillel Neuer, UN Watch executive director, and one of Canada’s unsung heroes, that a declaration adopted on Aug. 26, 2008, by an African regional meeting in Abuja, Nigeria, ‘fails to address racial and ethnic crimes committed by Sudan, tramples international human rights guarantees on free speech, places Islam above all other religions, and targets Israel alone, implying that it is uniquely racist.’…“ — N. Emmanuel, “Darfur: Two Measures for Muslim Corpses,” The Suburban, Sept. 3, 2008.

“A draft document circulating at the United Nations suggests human rights violators will get off the hook at the upcoming Durban II anti-racism conference in Geneva while Israel will again come in for special opprobrium, and the West – including its fundamental respect for free speech – will come under attack, said Hillel Neuer, executive director of UN Watch…” — “Durban II prep conference called a concern,” The Canadian Jewish News, Sept. 18, 2008.

“…The UN watch report on former UN High Commissioner for Human Rights Arbour calls on the new Commissioner use her ‘bully pulpit’ to promote human rights everywhere. With a staff of almost a thousand and an annual budget (from the UN budget and donations) of  $150 million, her office is a well-appointed pulpit, but the fact remains that her only weapon is persuasion. …” — “Human rights at the UN,” Oxford Analytica, Aug. 30 – Sept. 5, 2008.