Issue 578: UN Elects Syria & Venezuela to Leadership on Committee Against "Subjugation of Peoples"

UN Chief Ban Ki-moon: “I commend the leadership of all those committed to bringing new energy to its work” 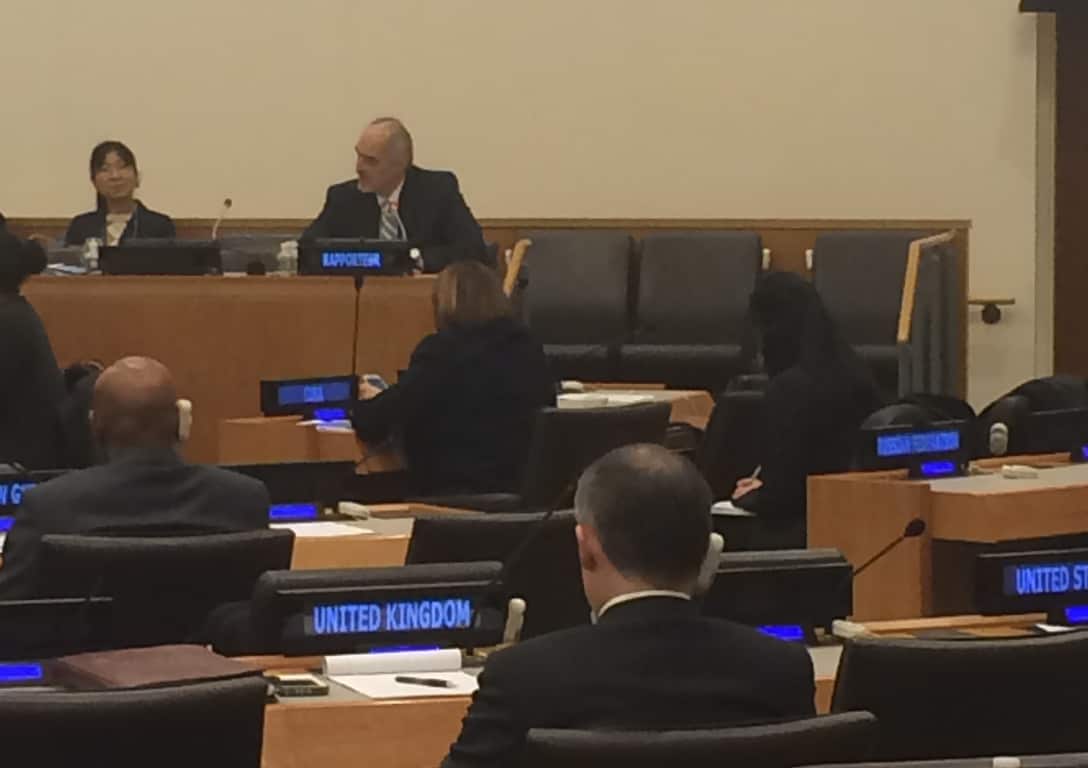 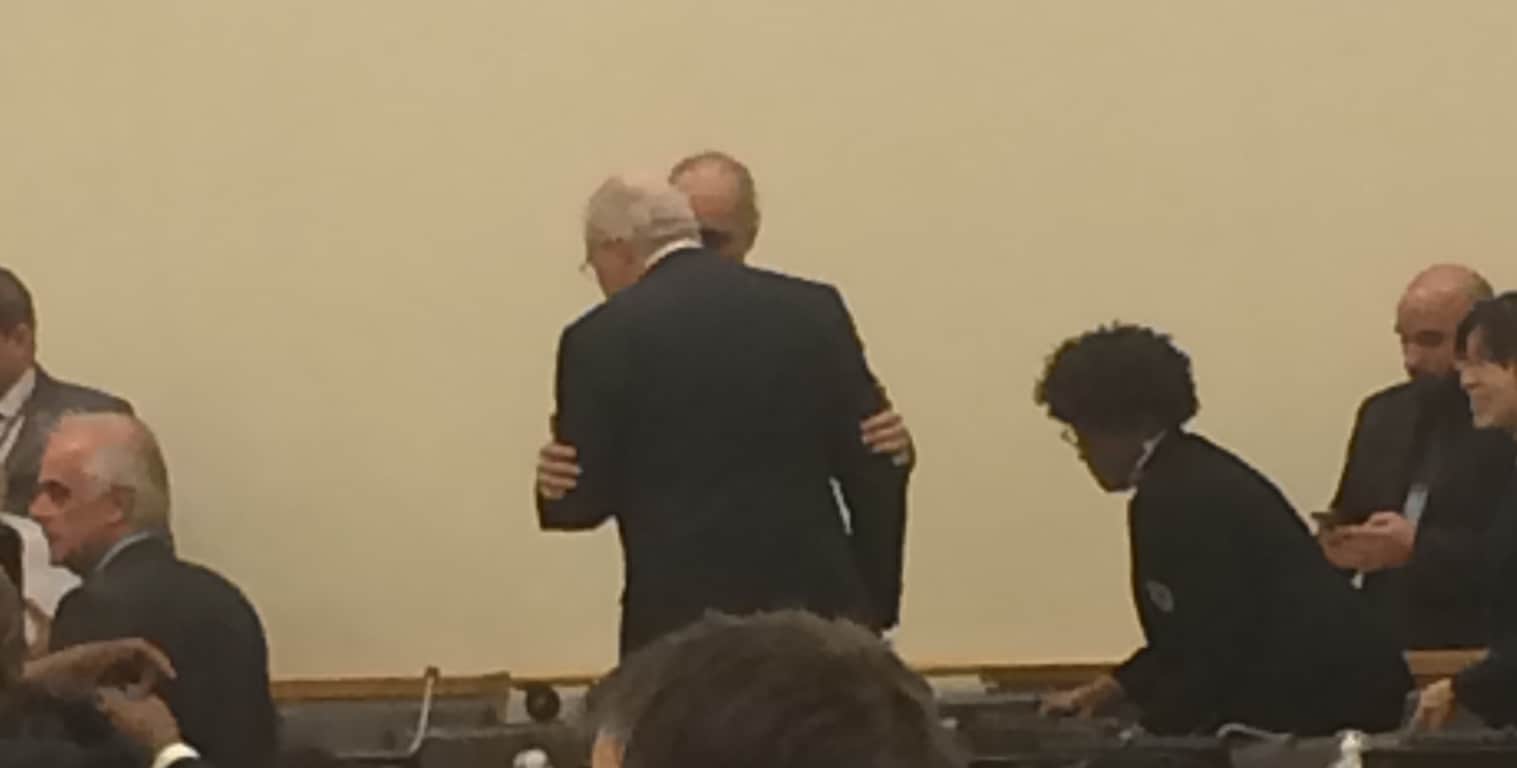 Left: Syria’s Bashar Ja’afari speaking today from the UN Decolonization Committee dais.
Right: Ja’afari embraces new Venezuelan Chair, Rafael Darío Ramírez Carreño. (Photos: UN Watch.)
GENEVA, February 25, 2016 — UN Watch called on Ban Ki-moon to retract blessings delivered today before an anachronistic UN committee charged with “decolonizing” the Falkland Islands and Gibraltar — at the same time as the 24-nation panel elected mass murdering Syria and human rights abusing Venezuela to leadership posts. “I commend the leadership of all those committed to bringing new energy to its work,” said Mr. Ban.
UN Watch instead is now calling on Ban Ki-moon, U.S. Ambassador Samantha Power, and the EU’s UN ambassadors to condemn the world body’s “absurd and morally obscene” election of Syria and Venezuela to senior posts on a decolonization committee that is charged with upholding fundamental human rights in opposing the “subjugation, domination and exploitation” of peoples — a propaganda victory that—if the past is any guide—is certain to be trumpeted by both the Assad and Maduro regimes.
The election of Venezuela’s UN ambassador as Chair—Rafael Darío Ramírez Carreño—took place this morning in the opening 2016 session of the UN’s Special Committee on Decolonization.
Twenty-five human rights groups led by UN Watch just spotlighted gross violations of human rights in Venezuela this week when they awarded the 2016 Geneva Summit Courage Award to two Venezuelan opposition leaders who are political prisoners. 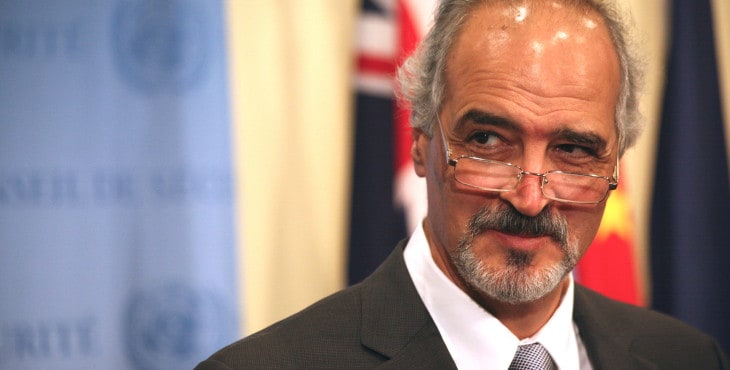 Syrian ambassador Bashar Ja’afari (photo above) was re-elected as Rapporteur.

President Michele Bachelet of Chile should be ashamed that her country joined the consensus vote, as should India, despite repeated appeals by UN Watch to vote against the Assad regime’s candidate. Both democracies sit on the 24-nation committee.

For several weeks UN Watch warned Ban Ki-moon and others of the expected election of Syria, and urged him to speak out, but to no avail.

It is incomprehensible for the UN on one day to lament the regime’s killing and wounding of hundreds of thousands of Syrians—to declare the regime guilty of “extermination” of its own people—and to then hand this gift of false legitimacy to the mass murderer Bashar al-Assad.

Today’s UN vote only helps the Assad regime portray itself a UN human rights arbiter. That’s an insult to Syria’s victims. Morally, Mr. Ban should do the right thing and at the very least condemn the decision.

Although Ban Ki-moon and his spokespersons often insist that he cannot speak on elections conducted by member states, actions taken by other high UN officials prove otherwise.

Syria can now trumpet a propaganda victory as it did when a similar miscarriage of justice occurred in 2013:

The committee is notorious for its habit of holding regional seminars in tropical islands—”alternately in the Caribbean and the Pacific”—at considerable expense. Madeleine K. Albright, as U.S. representative at the United Nations in the late 1990s, called these expenditures ”frivolous and unneeded.”

UN Watch is urging current U.S. ambassador Samantha Power to follow her predecessor and finally speak out against the travesties of justice worked by this anachronistic and corrupt committee.