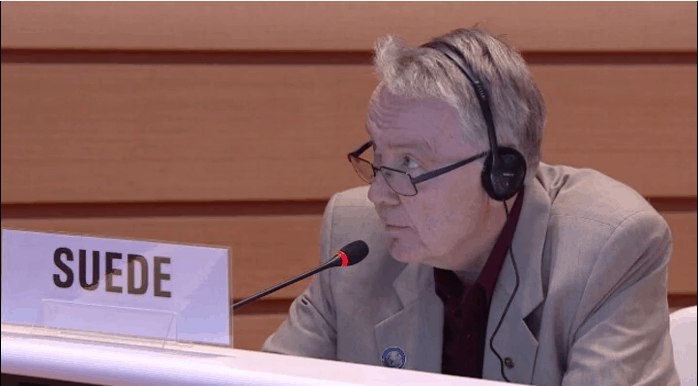 Swedish delegate joins UK, France, Germany and other EU states today in voting “Yes” to single out Israel at the 2016 WHO world assembly, May 25, 2016.

GENEVA, May 25 — The UK, France, Germany and other EU states voted today for a UN resolution, co-sponsored by the Arab group of states and the Palestinian delegation, that singled out Israel at the annual assembly of the World Health Organization (WHO) as the only violator of “mental, physical and environmental health,” and commissioned a WHO delegation to investigate and report on “the health conditions in the occupied Palestinian territory” and in “the occupied Syrian Golan,” and to place it on the agenda again at next year’s meeting.
By contrast, the UN assembly did not address Syrian hospitals being bombed by Syrian and Russian warplanes, or millions of Yemenis denied access to food and water by the Saudi-led bombings and blockade, nor did it pass a resolution on any other country in the world. Out of 24 items on the meeting’s agenda, only one, Item No. 19 against Israel, focused on a specific country. The resolution was worse than last year’s text, adding several new accusations, many of them beyond the WHO’s remit.
UN Reaches New Heights of Absurdity
“The UN reached new heights of absurdity today,” said UN Watch executive director Hillel Neuer, “by enacting a resolution which accuses Israel of violating the health rights of Syrians in the Golan, even as in reality Israeli hospitals continue their life-saving treatment for Syrians fleeing to the Golan from the Assad regime’s barbaric attacks.”
“Shame on Britain, France and Germany for encouraging this hijacking of the annual world health assembly, and diverting precious time, money, and resources from global health priorities, in order to demonize Israelis, especially when, in reality, anyone who has ever walked into an Israeli hospital or clinic knows that they are providing world-class health care to thousands of Palestinian Arabs, as well as to Syrians fleeing Assad,” Neuer added.
“At the same time,” said Neuer, “UN Watch commends the principled stand taken by the U.S., Canada, Australia, Paraguay, Guatemala, Micronesia and Papua New Guinea in joining Israel to oppose perpetuating a politicized agenda item.” The U.S. and Canada both took the floor today to strongly object to the anti-Israel exercise.
The vote was 107 to 8 for the resolution, with 8 abstentions and 58 absent. The resolution calls for reports on a series of alleged Israeli violations, including on “the impact of prolonged occupation and human rights violations on mental,
physical and environmental health” in “the occupied Palestinian territory.”

The text also adopted three reports mandated by last year’s Arab-sponsored resolution: a “field assessment” on “health conditions in the occupied Palestinian territory”, a similar report by the WHO director-general, and a related report by the WHO secretariat. 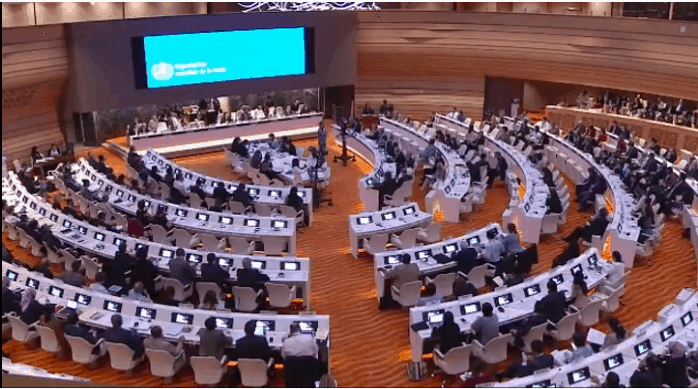 Palestinian and Syrian Submissions
By backing the measure, EU states joined in the delegitimization of Israel—in the form of a special debate, three lopsided reports, the resolution, and the publication of country submissions, including an inflammatory 59-page Palestinian submission which complains of a “racist separation barrier” while blaming increased Palestinian traffic accidents on the fear of “being pursued by settlers”; and a Syrian submission laced with anti-Semitic conspiracy tropes, yet circulated as an official UN document on the conference agenda, which alleges that “the Israeli occupation authorities” continue “to experiment on Syrian and Arab prisoners with medicines and drugs and to inject them with pathogenic viruses.”
Unable to deny Israel’s medical treatment of thousands of wounded Syrians, the regime accuses Israel of a plot: healing “armed terrorists from Jabhah al-Nusrah” so that they can “resume their subversive terrorist activities directed against the country’s peaceful citizens and its infrastructure.”
Iran and Syria Take the Floor
Several countries took the floor ahead of the vote. Iran said Gaza was under “an inhuman blockade.” Syria said “the occupying Israeli forces continue their immoral practice, which punish our people in the Golan.”
Egypt accused Israel of “disregard for basic human rights.” Pakistan spoke of Israel’s “devastation of the health system in the occupied territories” and of a “wave of terror against the Palestinian civilian population.”

Venezuela’s Maduro regime said there was a need to “bring in medicines, but this is being inhibited by the occupying power, Israel.”

UNRWA, which received more than $400 million from the U.S. last year, said the root causes of Palestinian medical problems include “interference with basic human rights as a result of numerous policies of the Israeli authorities.”
The whole was met with delight in the overflow room for media and NGO representatives, who snickered and scoffed when the Israeli delegate took the floor to denounce the politicized resolution.
EU Joined the Jackals
Had the EU wanted, they could have set the record straight, and taken a stand against such base demonization of the Jewish state. Disgracefully, however, Britain, France, Germany and all other EU states joined the jackals by voting for today’s resolution.
The EU states could have introduced their own resolution about how Syria has killed hundreds of thousands of its own people, destroying the health rights of the Syrian people.
Yet the EU was silent. Instead, it justified its vote by claiming in its speech that today’s resolution was “technical.” This is the old Brussels-Ramallah wink-and-nod game: the PLO submits a more inflammatory text at the beginning, knowing it will be revised later to allow the Europeans to pretend they achieved a “balanced” text. Israel is then expected to celebrate that it has been lynched with a lighter rope.
Last month, France and Spain voted for an Arab-sponsored UNESCO resolution that contained the wild conspiracy claim that Israel was “planting fake Jewish graves” in Jerusalem.
With today’s vote, which robs the world health organization of limited time and resources in order to portray Israel as the world’s only violator of health rights—when in fact Israel is the beacon of the entire region on promoting and respecting the health rights of all people—the entire EU now descends into irrationalism.
By scapegoating the Jewish state for all the world’s health problems, just as medieval Europe once accused the Jews of poisoning the wells, the EU aids and abets the UN and its World Health Organization to betray the cause of humanity and the very principles upon which they were founded.
Internet link to this release