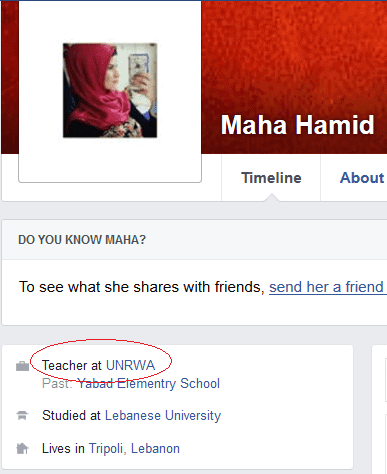 Maha Hamid, who identifies herself on her Facebook profile as an UNRWA teacher, features a video in her public Facebook page from the Shehab News Agency of Hamas.
The video commemorates Hamas terrorists as “martyrs,” and celebrates the tunnels used by Hamas to carry out attacks. It includes footage of one such attack, which killed several Israeli soldiers. Below are several screenshots of the video, as well as evidence of Maha Hamid posting the video to her wall (see first image below).

All of these posts by UNRWA teacher Maha Hamid violate the duty of neutrality applicable to all UNRWA employees, and negate the right to life protected in the International Covenant on Civil and Political Rights.