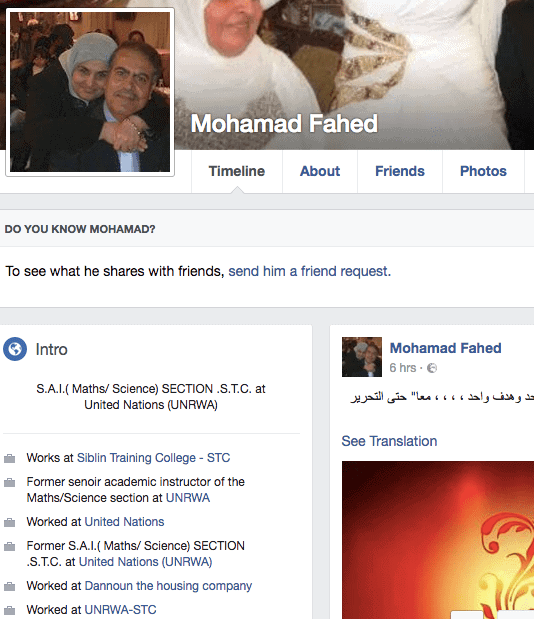 Mohamad Fahed lists himself as an employee of the United Nations and as an instructor within the Maths/Science Section of UNRWA’s Siblin Training Center. He endorses Hamas, and shared a post celebrating Hamas’ June 2014 kidnapping and murdering of three Jewish teenage boys.

Fahed has posted endorsements of Hamas, such as Image 1. He has also posted a picture of a Palestinian boy holding up three fingers towards Israeli soldiers, Image 2, a symbol that is widely recognized as a celebration of the death of three Jewish boys whom Hamas operatives kidnapped and murdered in June 2014. This post highlights that UNRWA’s Siblin Training Center is a hotbed of extremism, as numerous teachers and students at UNRWA, or at UNRWA’s Siblin Training Center, all “liked” the photo. Extremism is mainstream within this UNRWA circle, as can be seen in Image 3 – Image 9.