Country scorecard and evaluation of the Universal Periodic
Review system of the U.N. Human Rights Council 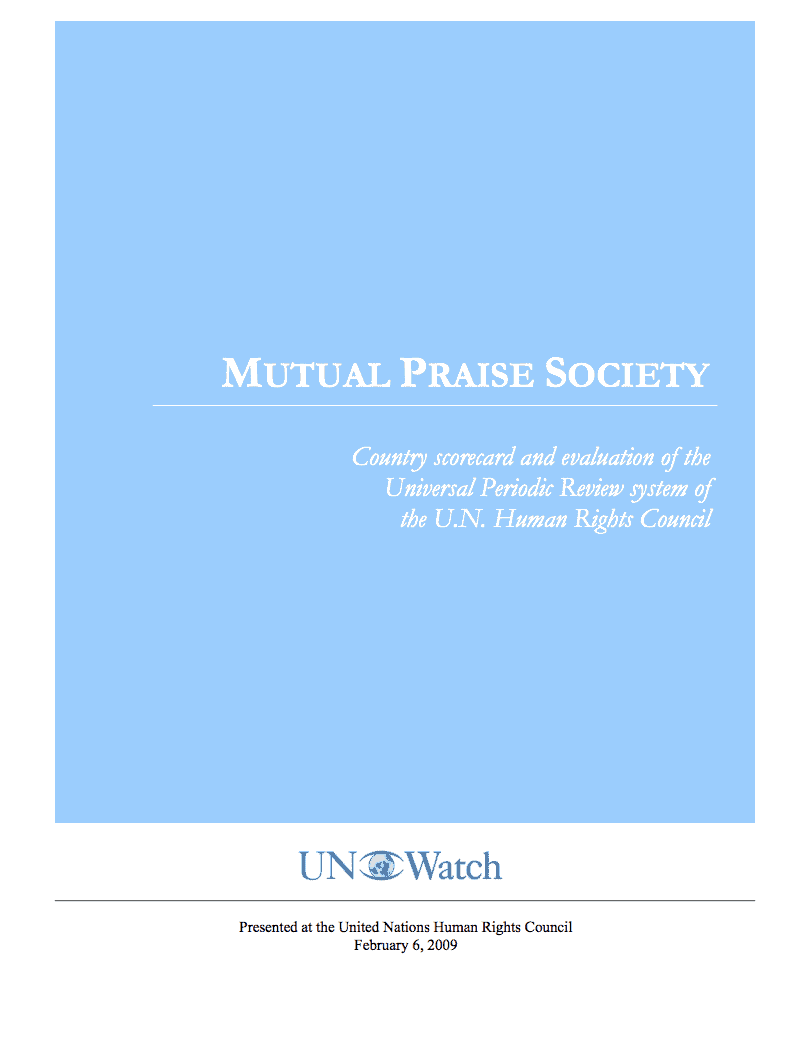 1. The primary innovation of the UN Human Rights Council is its Universal Periodic Review (UPR) mechanism, which is meant to review the human rights records of all 192 UN member states, once every four years. According to the Council’s Institution-Building Package of 2007, UPR’s objectives are to achieve “the improvement of the human rights situation on the ground” in the country under review, and “the fulfilment of the State’s human rights obligations and commitments.” Reviews are to be conducted in an “objective,” “non-selective” and “non politicized” manner.

2. The substantial data compiled in this study reveals, however, that the reviews conducted by the vast majority of countries participating in the UPR process are failing to achieve its stated purpose. More than 300 UPR interventions were analyzed and evaluated, as detailed in 12 country charts. Out of 55 countries examined—including all 47 members of the UN Human Rights Council—only 19 had average scores indicating that they contributed positively. Tragically, a majority of 32 out of 55 countries acted as a mutual praise society, misusing the process in order to legitimize human rights abusers, instead of holding them to account. (Four were neither positive nor negative: two with average scores of 0, and another two having made no interventions in any of the country reviews examined.)

3. As shown in Table 1, of the 19 countries with overall positive scores—who properly used the UPR process to promote human rights and fundamental freedoms—Canada was the only country that ranked as VERY CONSTRUCTIVE. It was the most consistent in vigorously challenging countries on specific human rights issues, with strong interventions that support the UPR’s purpose of reminding countries of their responsibilities in order to help victims and address human rights violations wherever they occur. We recommend that Canada continue to hold all countries to account, particularly the world’s worst abusers, and that other countries follow.

4. Close behind were France, Germany, Mexico, Netherlands, Slovenia, Switzerland, the United Kingdom and the United States, all of whom were rated as CONSTRUCTIVE.  We recommend that these nations—which include some the world’s leading democracies—undertake to do better. While it is in the nature of governments to balk at confronting other countries for fear of affecting friendly diplomatic relations, human rights cannot be neglected, and countries must live up to their obligations as participants in the UPR process. The UN member states that conduct UPR will only engender accountability from the country under review, and thereby protect human rights victims, to the extent that they pose tough and specific questions for each country under review.

5. Another 10 countries were found to have made contributions to the review process that were positive, yet WEAK: Argentina, Australia, Bosnia, Brazil, Chile, Italy, Japan, Slovakia, South Korea andZambia.  That so many respected democracies choose to ask soft questions, shying away from pointedly addressing violations and ensuring scrutiny, is unacceptable. We urge a dramatic shift in approach by countries that should be leading by example. (Included also in this same category were two countries whose contributions were neither positive nor negative: Cameroon and Ukraine.)

6. The rankings in Table 1 reflect only the average quality of interventions made. They do not measure the quantity of statements, the statistics for which are available in Tables 2 and 3. Switzerland, for example, spoke only in 6 out of the 12 country reviews examined in this report. Similarly, the United States spoke in only 7 of the 12 reviews, and of late has been silent at UPR sessions. Argentina, Bosnia, Chile and Slovakia spoke only a handful of times. We recommend that all countries—in particular, those who are members of the Human Rights Council—fulfill their duties by participating meaningfully in the UPR process.

7. Regrettably, a majority of the countries examined in this report not only failed to fulfill the stated objective of UPR, but acted to undermine it. Their interventions praised and covered up for the country reviewed, effectively blocking, undermining and spoiling genuine scrutiny of violations. When violators are granted impunity, victims are let down. This group includes five countries whose interventions were rated as DETRIMENTAL: Bolivia, Ghana, Russia, South Africa and Uruguay. Even worse, 11 countries were rated in their performance as VERY DETRIMENTAL: Angola, Egypt, Jordan, India, Iran, Madagascar, Malaysia, Mauritius, Nicaragua, Saudi Arabia and Senegal.

9. The report demonstrates that bloc affiliations played an important role in determining how countries reviewed each other. For example, as a rule, members of the 57-strong Organization of the Islamic Conference strongly praised each other’s records. As a result, some of the poorest overall reviews were those performed on Algeria, Bahrain, Morocco and Tunisia, closely followed by Pakistan and Uzbekistan. We urge all UN members states not to allow bloc politics to override their obligation to conduct UPR reviews in an objective, non-selective and non-politicized manner.

10. While almost all of the countries that acted positively in UPR rank as free democracies under the annual survey by Freedom House, not all free democracies acted positively. On average, the UPR interventions of Ghana, India, Indonesia, Mauritius, Senegal, South Africa and Uruguay undermined human rights, while those of Ukraine were neither negative nor positive. It is time for democratic countries at the UN to act like democracies.

11. Each of the 12 country charts in this report begins with a list of human rights violations committed by the country under review, as documented by respected human rights NGOs, along with a link to the official UN compilation of NGO submissions on that country’s record. Regrettably, as the charts show, most country interventions failed to consider this NGO information, and failed to address the most prevalent human rights violations.

12. We urge the Human Rights Council to allow reliable NGO information to play a far greater role. We recommend an end to the exclusion of NGOs from the oral debate of review sessions. Moreover, in the modest time currently allotted to NGOs during the Human Rights Council’s plenary sessions that treat each UPR report, the freedom of speech of NGOs must be protected. States that frivolously interrupt NGOs on one or another pretext should be disciplined by the council President. At the same time, the UN secretariat should beware of submissions by “GONGOs”—phony, government-controlled NGOs—that seek to subvert the system.

For the Full Text of the Report, Click Here.