The U.N.’s Anti-Israel Blacklist: Myths & Facts on the "Settlements Database"

On March 24, 2016, at its 31st session, the United Nations Human Rights Council (HRC) adopted resolution 31/36 entitled “Israeli settlements in the Occupied Palestinian Territory, including East Jerusalem, and in the occupied Syrian Golan.”
The resolution requested the United Nations High Commissioner for Human Rights, in close consultation with the Working Group on the issue of human rights and transnational corporations and other business enterprises, to produce a database of all business enterprises that “directly and indirectly, enabled, facilitated and profited from the construction and growth of the settlements.” The database is to be updated annually.
The High Commissioner was instructed to submit the data in the form of a report to the Council at its March 2017 session, but he asked for the deadline to be delayed until December 2017. This deadline was missed by a month, and the report was submitted on January 26, 2018, but the database itself was not included due to a lack of resources, wrote the High Commissioner. His office identified 206 companies that fit the criteria of Resolution 31/36, but the office had not been able to communicate with all of them and expected the database would be published at some future date. Read More

[accordion][accordion_section title=”1. MYTH: The UNHRC members who voted for the resolution and creation of this blacklist were motivated by concerns of human rights and international law.” =active”true”] FACT: The listed co-sponsors on the resolution creating the blacklist were virtually all tyrannies or other non-democracies with egregious records on human rights, who oppose any positive human rights mechanisms at the UN, including: Kuwait on behalf of the 22-member Arab Group, Pakistan on behalf of the 56-nation Organization of Islamic Cooperation, Sudan, Venezuela, Algeria, Bahrain, Bolivia, Chad, Cuba, Djibouti, Ecuador, Egypt, and Libya.
Likewise, most of the 32 countries who voted for resolution were also non-democracies, including Algeria, Bangladesh, Bolivia, Burundi, China, Congo, Côte d’Ivoire, Cuba, Ecuador, El Salvador, Ethiopia, Indonesia, Kyrgyzstan, Maldives, Morocco, Qatar, Russia, Saudi Arabia, United Arab Emirates, Venezuela and Viet Nam.
On the contrary, many of those voting for the resolution did so to deflect attention from their own abuses of human rights and international law, including:
Morocco voted for the resolution even as it Illegally occupies Western Sahara since 1974.
Russia voted for the resolution even as it illegally occupies Georgian territories of Abkazia and South Ossetia since 2008 and illlegally annexed Crimea from Ukraine in 2014.
China voted for the resolution even as it deprives Tibetans’ of basic freedoms, including freedom of speech, assembly, movement, and religion and exploits Tibet’s natural resources to benefit China, not Tibet and employs forced labor to produce goods exported to the United States. According to Chinese defector Chen Guangcheng, “many of the trappings of the [Christmas] holiday” are made by Chinese prisoners forced to work 10-15 hours a day who are harshly punished for failing to meet quotas. Workers at toy factories supplying Mattel, McDonalds and Disney regularly work more than double the amount of legally permitted overtime in inhuman conditions. Chinese vocational students as young as 16 are forced to work 12 hour days for months on end in factories producing computer components for global companies such as Hewlett-Packard and Apple in order to receive graduation certificates.
Qatar voted for the resolution even as it subjects 800,000 migrants in the country to build stadiums for the 2022 World Cup to modern slavery under inhumane and life-threatening working conditions. Though Qatar does not publicize information on migrant worker death, hundreds have reportedly died building stadiums for the World Cup. Qatar is ranked 5 out of 167 on the Global Slavery Index 2016.
Saudi Arabia voted for the resolution even as it causes the deaths of thousands of Yemeni civilians in bombing campaign using weapons supplied by the UK, France and the US.
Venezuela voted for the resolution even as it beats, arrests, jails and tortures peaceful protesters, dissidents, and students, and as its policies have caused mass hunger while the military controls food imports and gets rich by selling food on the black market.[accordion]
[/accordion_section][accordion_section title=”2. MYTH: But at least the few democracies who voted for the resolution were motivated by objective concerns about doing business in occupied or disputed territories.” =active”true”]FACT: Switzerland has affiliations with at least two companies doing business in occupied Western Sahara.[/accordion_section][/accordion][accordion][accordion_section title=”3. MYTH: All UNHRC members supported the blacklist, which enjoys support from an international consensus.” =active”true”]
FACT: Fifteen UNHRC members refused to support the blacklist, including Belgium, France, Germany, Netherlands, United Kingdom. Strong objections included:

In addition, many countries refused to engage with information requests made by the UN about the blacklist, as confirmed by the High Commissioner in his report. [/accordion_section][/accordion] [accordion][accordion_section title=”4. MYTH: The blacklist is fully in line with EU policy to deny support to occupations and settlements anywhere in the world.” =active”true”]
FACT: The EU has no such policy of denying support to occupations or settlements, except in the case of Israel. Indeed, with Morocco, the EU has a fishing agreement in place for which it pays €40 million annually and receives access to all of Morocco’s fishing waters, including the waters off the coast of Moroccan-occupied Western Sahara.
Furthermore, the EU’s foreign aid agreement with Morocco contains no condition that the millions in European aid to Morocco will not be used in Western Sahara.
Similarly, with Turkey, the EU has placed no restrictions on grants to Turkey for the Horizon 2020 scientific research program to ensure monies would not reach Turkish universities operating in Turkish-occupied Northern Cyprus. (Though such restrictions are in place on grants to Israel for the same scientific research program).
In addition, the EU has not advocated boycotts of the Turkish hydrocarbon company or Turkish universities operating in Turkish-occupied Northern Cyprus. The EU provides direct aid of €28 million per year to the Turkish Cypriot community, including grants to students and businesses. [/accordion_section][/accordion][accordion][accordion_section title=”5. MYTH: The blacklist is merely a reporting mechanism, not a sanction. Thus the UNHRC acted fully within its mandate in creating this database.(Global Legal Action Network, Dec. 6, 2017, Paragraph 10; Amnesty International, Nov. 30, 2017, Paragraph 7).” =active”true”]
FACT: The goal of the database is to discourage companies from doing business in Israeli settlements, as recommended by Paragraph 117 of the UN Report on Settlements which is expressly referenced in resolution 31/36, and thereby to pressure Israel economically to withdraw from the settlements. As such, it is punitive in nature. Furthermore, at least one senior Palestinian official has expressed hope the blacklist will lead to sanctions. Significantly, under Article 41 of the UN Charter, only the Security Council has the authority to impose sanctions on a UN member state, including “complete or partial interruption of economic relations and of rail, sea, air, postal, telegraphic, radio, and other means of communication, and the severance of diplomatic relations.” Thus, the creation of a blacklist designed to pressure Israel economically is beyond the authority of the Human Rights Council.[/accordion_section][/accordion][accordion][accordion_section title=”6. MYTH: All business activity in settlements is illegal.” =active”true”]
FACT: As a matter of international law, business activity in “settlements” is not illegal.

Timeline
March 24, 2016 – UN HRC adopts resolution 31/36 calling for the High Commissioner for Human Rights to publish a database of companies doing business in Israeli settlements to be transmitted to the Human Rights Council at its 34th session in March 2017. The resolution is adopted by a vote of 32 to 0 with 15 abstentions. The United States has no vote on the resolution as it is adopted during the United States’ mandatory year off from the Human Rights Council following two consecutive terms.
December 23, 2017 – UN General Assembly approves budget of $138,700 to fund compilation of the database—$102,400 for salary over eight months and $36,300 for “documentation.”
December 23, 2017 – UN Security Council adopts Resolution 2334 calling Israeli settlements “a flagrant violation of international law.” The United States declines to exercise its veto, abstaining in the vote.
February 13, 2017 – At the request of the High Commissioner for Human Rights, the UNHRC agrees to defer publication of the database to no later than December 2017.
September-October 2017 – UN HRC sends letters to 190 companies—130 Israeli and 60 international—warning that they are about to be added to a database of companies doing business in Israeli settlements.
January 26, 2018 – High Commissioner for Human Rights submits report pursuant to Resolution 31/36, but refrains from listing companies. The report identifies 206 companies that fit the criteria of the resolution, located in 21 countries, including Israel, the U.S., Germany, France and the Netherlands. The report recommends more resources be allocated to the project and states that the list will be released at some future date.
August 7, 2018 – Former High Commissioner Zeid Hussein informs Human Rights Council that the database is not complete yet because his office has not completed the process of contacting all the companies.
March 4, 2019 – High Commissioner Michelle Bachelet informs Human Rights Council that her office is still working to discharge the mandate: “Given the novelty of the mandate and its legal, methodological and factual complexity, further consideration is necessary to fully respond to the Council’s request.
Feb 12, 2020 – High Commissioner Bachelet publishes the blacklist consisting of 112 companies, of which 94 are Israelis and the remaining 18 come from six other countries (France, Luxembourg, Netherlands, Thailand, UK, US). Both the report (Para. 19) and accompanying press release acknowledge that the list was not the product of a “a judicial or quasi-judicial process,” and that it does not provide a “legal characterization of the activities in question, or of business enterprises’ involvement in them.” Thus, Bachelet effectively admitted that the publication of the list is nothing more than the technical fulfillment of the mandate given to her office by the Council in resolution 31/36 and has no legal value.

The list has no precedent & turns the UN into Ground Zero for the global anti-Israel boycott campaign. 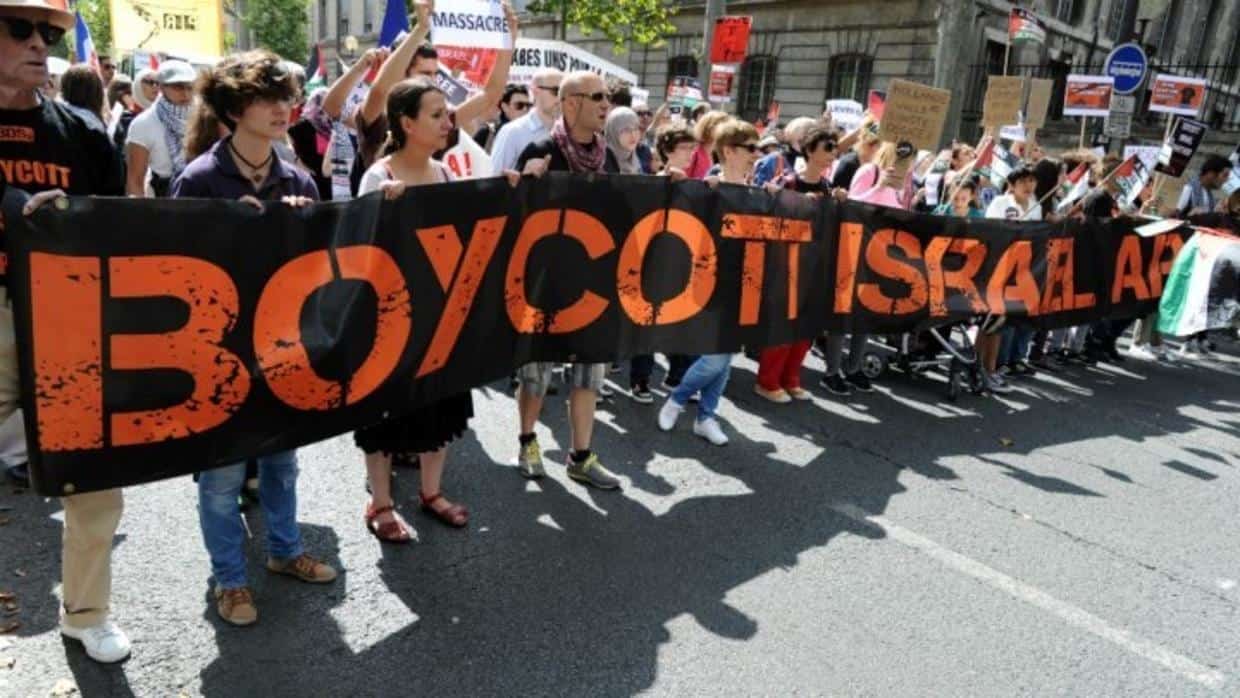 PrevPreviousNikki Haley to the Security Council: Where is the Palestinian Anwar Sadat?
NextU.N. elects Turkey to oversee human rights activists, VP of Committee on NGOsNext