Someone apparently thought that this petition would help the reputation of Jean Ziegler, the UN Human Rights Council official who created, managed and won the Muammar Qaddafi Human Rights Prize. How, though, isn’t entirely clear.

The signatories include North South 21 — the Qaddafi-funded organization in Geneva that manages the Qaddafi prize, and which has been closely linked with Ziegler. As the Swiss newspaper NZZ reported in 2006, “North-South 21 had been mandated to manage the Qaddafi Prize for years, as confirmed by Ahmad Soueissi, North-South’s managing director.”

Another signatory, it is no accident, is CETIM, a partner organization of North-South 21 that proudly received the Qaddafi prize, which comes with a reported $250,000 in Libyan funding (see announcement below, from the CETIM website).

In the end, therefore, while the petition claims that Ziegler’s Qaddafi connections are “lies” and a “slanderous smear campaign,” it only ends up substantiating those very connections. 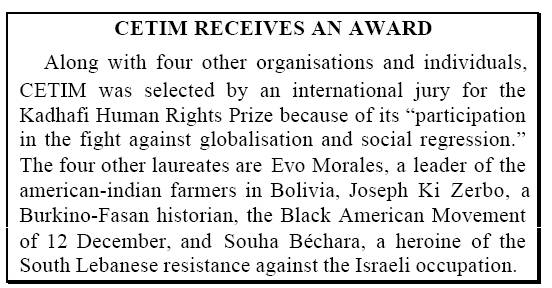