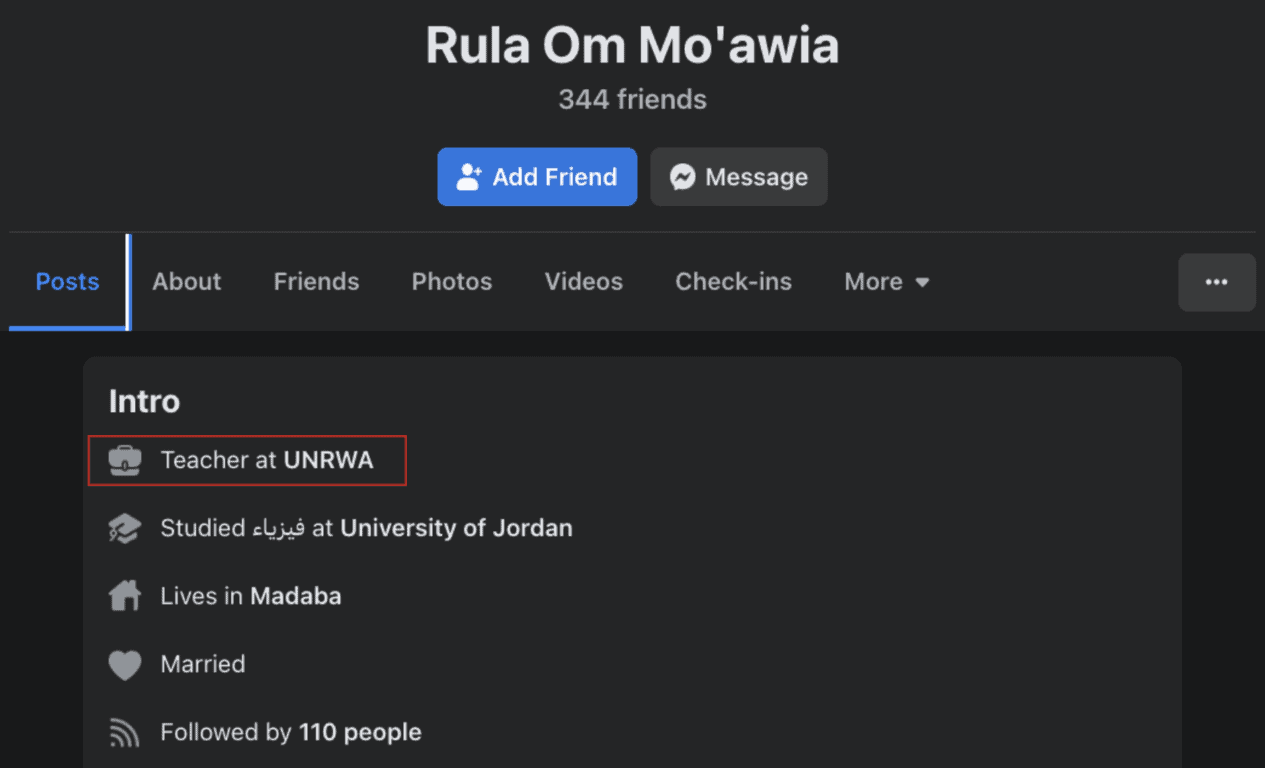 Rula Om Mo’awia lists herself as a teacher at UNRWA. She also has several UNRWA employee friends and teacher friends, further supporting her statement that she is an UNRWA teacher. Mo’awia rejects Israel’s right to exist and incites against Israel in her posts. 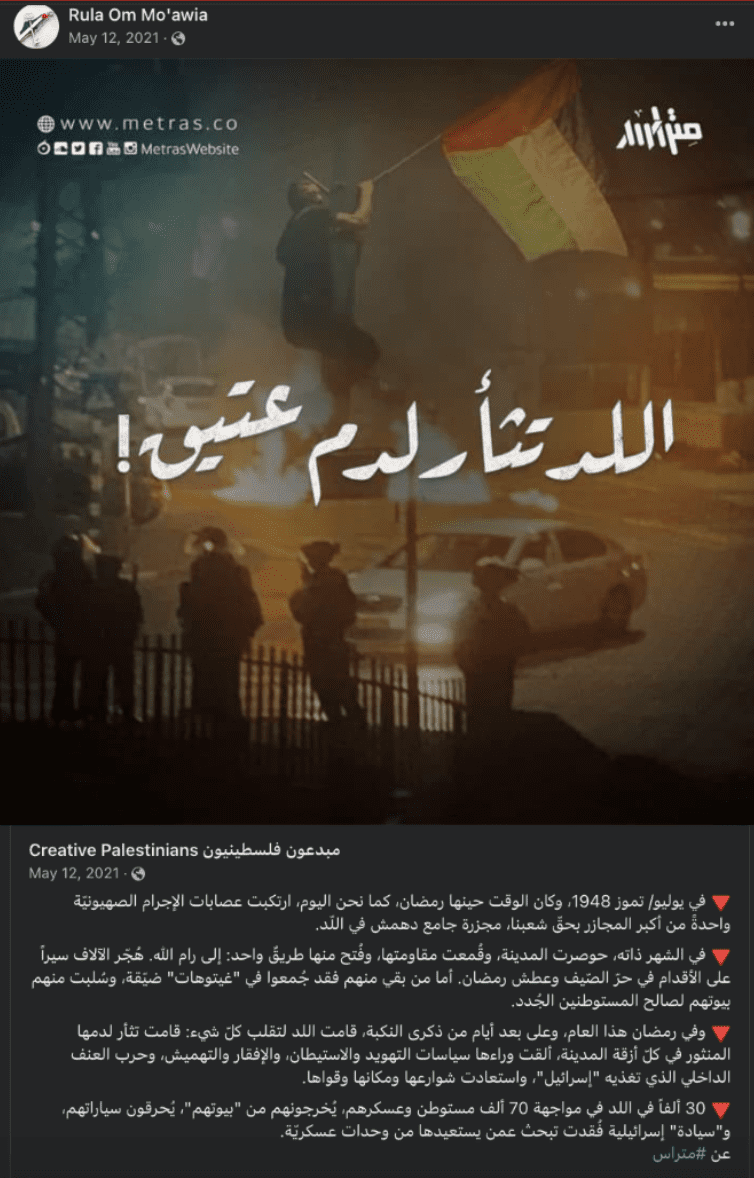 In a May 2021 post about that month’s violent Arab-Jewish riots, Mo’awia incites against Israel by claiming the violence was “sowed by Israel” and rejects Jewish rights in Israel by describing the Jews involved in the riots as “settlers” even though the violence was within sovereign Israel, not the West Bank. In Mo’awia’s view the Jews who took control of Israel in 1948 are all illegitimate settlers. Mo’awia describes the Arab rioters in May 2021 as taking “revenge” for events going back to 1948.

The post further delegitimizes Israel by accusing it of ethnic cleansing against Palestinians in 1948, employing Nazi terminology (Israelis herded Palestinians into “ghettos”) to evoke an antisemitic comparison between Israel’s formation and the evils of Nazi Germany. Thus, according to Mo’awia, Israel was created on illegitimate foundations.

In July of 1948 – during Ramadan, the month
we’re in now – criminal Zionist gangs perpetrated one of the worst massacres of our people, the massacre of the Duhmush Mosque in Lydda.

That same month, the city was besieged, and one path was created leading out of the city – to Ramallah. Thousands were expelled, travelling on foot in the summer heat, and thirst of Ramadan. Those who remained were concentrated in crowded “ghettos,” and their homes were stolen so that they could be used by the new settlers.

This year, on Ramadan, just days after the commemoration of the Nakba, Lydda rose up to overturn everything: it rose up to take revenge for its blood that was shed in every part of the city, tossing aside the policies of Judaization, settlement, marginalization and impoverishment, and the internal violence that “Israel” has sowed, and it retook its streets, its status, and its strength.

30,000 in Lydda facing 70,000 settlers and their army, removing them from “their homes,” burning their cars. Israeli “sovereignty” was lost looking for military units that would restore it. 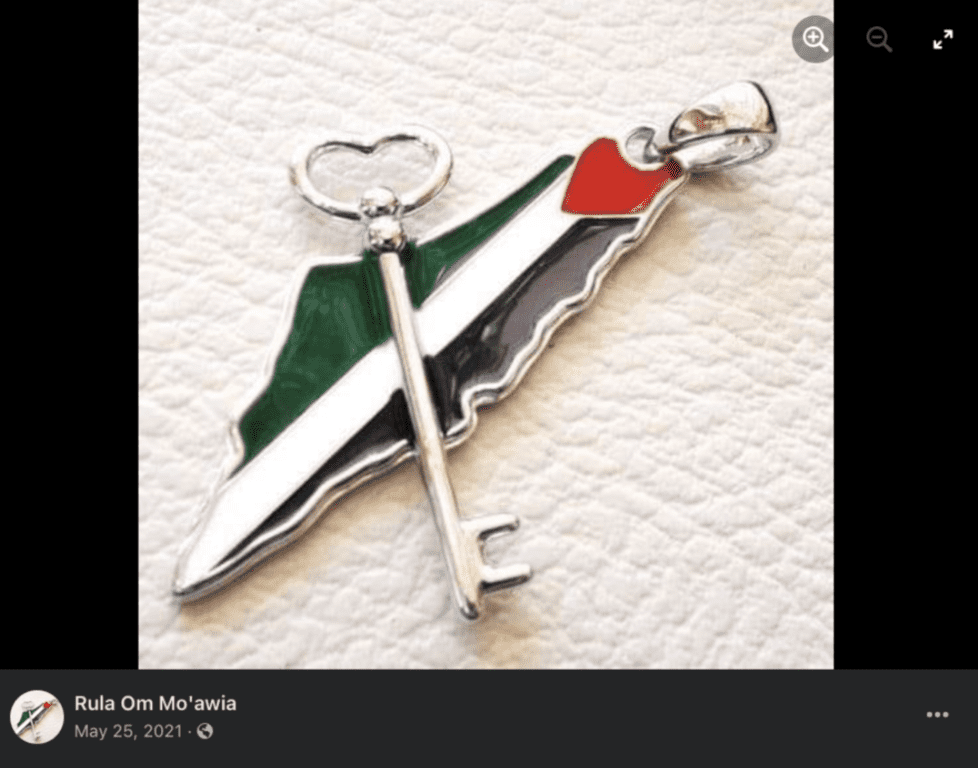 Mo’awia’s profile picture is the map of Israel draped in the Palestinian flag with a key symbolizing the so-called right of return of millions of Palestinians to the sovereign territory of Israel. It replaces Israel with Palestine, thus rejecting Israel’s right to exist.