In a detailed study released today by UN Watch, a Geneva-based non-governmental human rights organization, found that Qatar, Pakistan, Congo, Afghanistan, Angola and Nigeria have poor records and fail to qualify according to the UN’s own basic membership criteria. The council already counts Saudi Arabia, Burundi, China, Cuba, Venezuela, and UAE as members.

The U.N. also elected Mexico, Nepal, Senegal and Ukraine, all of whom were deemed “questionable” by UN Watch, due to their problematic human rights records or UN voting records.

“Sadly, the UN disregarded its own rules and principles by electing governments who violate the human rights of their own citizens, and who consistently vote the wrong way on UN initiatives to protect the human rights of others,” said UN Watch executive director Hillel Neuer.

“The U.N. electing Qatar, Congo and Pakistan as world judges of human rights is like a asking the foxes to guard the chickens,” said Neuer. “It’s absurd, immoral and offensive.” 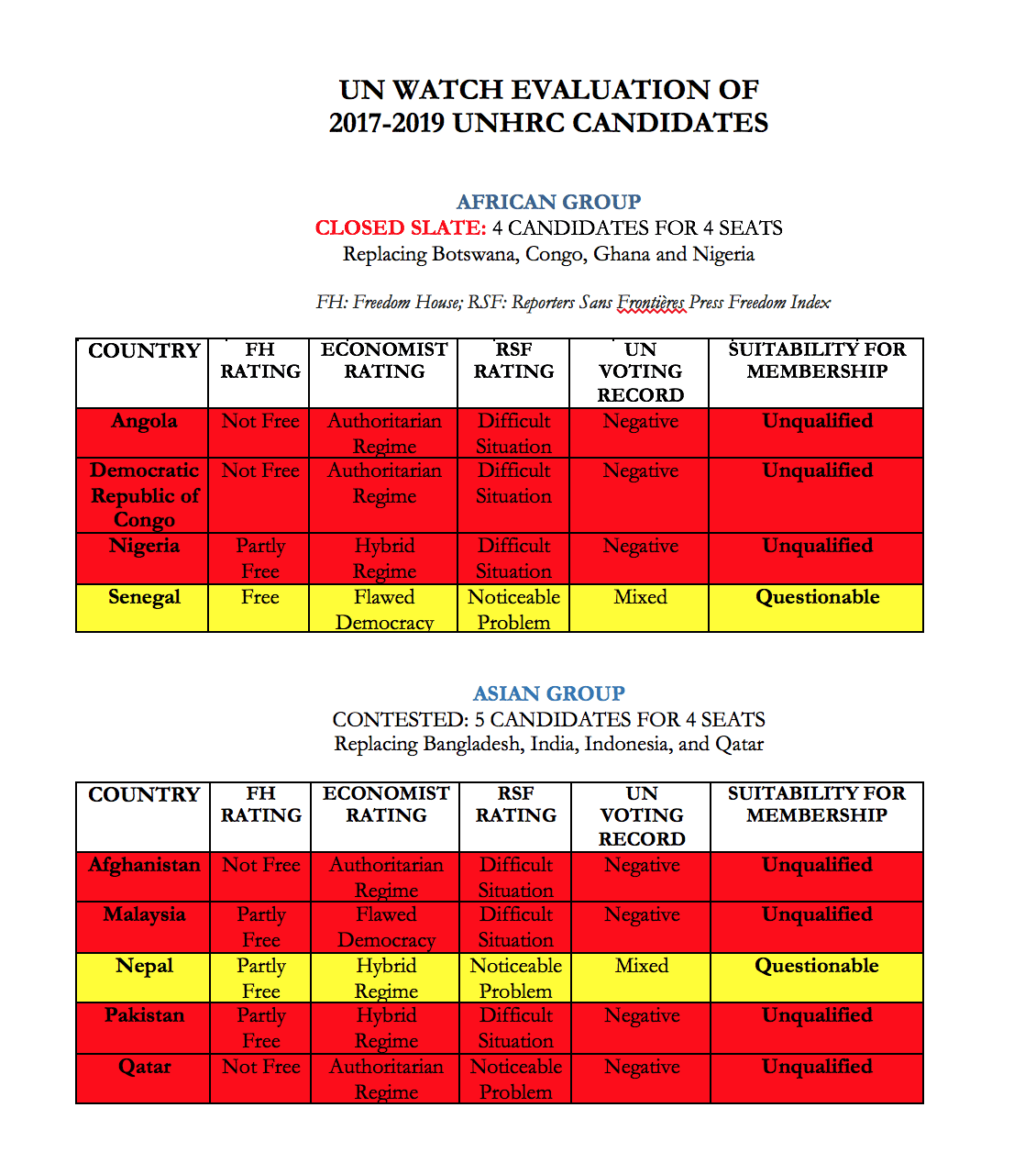 “Regrettably,” said Neuer, “despite their pledge in June to push for better membership and genuine competition among candidates, at least 22 EU states helped elect Angola ( which won 186 votes), and not one EU state said a word about hypocritical candidacies that only undermine the credibility and effectiveness of the UN human rights system. By turning a blind eye as even more human rights violators easily join and subvert the council, leading democracies will be complicit in the world body’s moral decline.”

“It is an insult to victims in these countries — like Asia Bibi, the innocent Christian mother of five on death row in Pakistan for the crime of blasphemy — and it’s a defeat for the global cause of human rights when the UN helps gross abusers act as champions and global judges of human rights. When the U.N.’s highest human rights body becomes a case of the foxes guarding the henhouse, the world’s victims suffer,” said Neuer.

Following are key campaign resources for activists and journalists:

Dictatorships have published and submitted to the UN absurd claims about their human rights record, which have been analyzed and exposed by UN Watch:

1. Ahead of tomorrow's election, we now present the farce of the U.N. Human Rights Council, by shining a spotlight on candidates' pledges.

3. Candidate #Pakistan.
The Lie: "We are deeply committed to human rights" https://t.co/YjpvOOQceM
The Truth: Death sentence for "blasphemy" pic.twitter.com/YHqtUvWIVv

5. Arguments of Congo's UNHRC campaign flyer:
– African endorsed us
– We're needed for stability
– We have territory, population & a capital pic.twitter.com/XFMb26MXcW