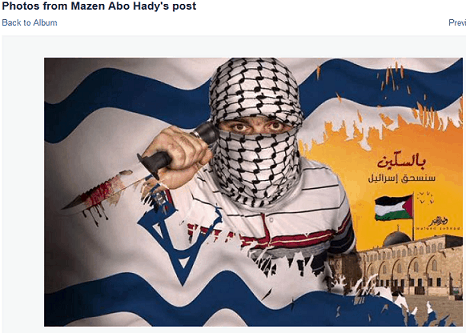 This followed a sustained UN Watch campaign that included three reports published from September to November documenting how UNRWA teachers and principals incited to racial hatred, anti-Semitism and terrorism on social media. In total, UN Watch identified more than 30 separate perpetrators, and launched petitions online to key governments.
UNRWA’s Chris Gunness Attacks UN Watch
The first reaction by UNRWA was for spokesman Chris Gunness to attack UN Watch. On Twitter, he issued an “appeal to journalists”:

After media agencies picked up the story and governments raised UN Watch findings with UNRWA leadership, the UN in October admitted that UNRWA employees “in a number of cases” were subjected to disciplinary action, including suspension and loss of pay, following an internal investigation.

UN Watch welcomed the news, yet demanded to know which of the UNRWA teachers identified in our reports were suspended, what were the findings, and whether the UN investigations found any additional incitement to anti-Semitic violence.
Floor of the U.S. Congress: UNRWA Condemned, UN Watch Thanked

On October 28, Rep. Ileana Ros-Lehtinen, Chairman of the Subcommittee on the Middle East and North Africa, took the floor in the U.S. Congress:

“Just last week, the U.N. quietly suspended several individuals after allegations of incitement were brought forth from the NGO U.N. Watch. And we thank U.N. Watch for carefully looking over this organization… These allegations, Mr. Speaker, are just the tip of the iceberg. We must not continue to send taxpayer dollars to UNRWA [and] to individuals tied to the terror group Hamas in violation of our laws.”

A December op-ed in the Boston Herald, by prominent attorney Jeffrey S. Robbins, a former U.S. delegate to the UN, was equally strong: “UN Watch documented how school principals, teachers and other staffers on the payroll of the U.N. Relief and Works Agency, or UNRWA, use social media to incite deadly attacks against ‘Jewish apes and pigs,’ urging Palestinians to murder Israelis. Its institutions have become schools for genocide, where students and the broader community are urged to kill.”

UNRWA to BBC: "Use the Words 'Israeli Occupation' in Coverage of Christmas
Issue 564: Watchdog Calls for Disciplinary Action Against UNRWA After Spokesman Demands BBC Use Words ‘Israeli Occupation’ in Report on Christmas