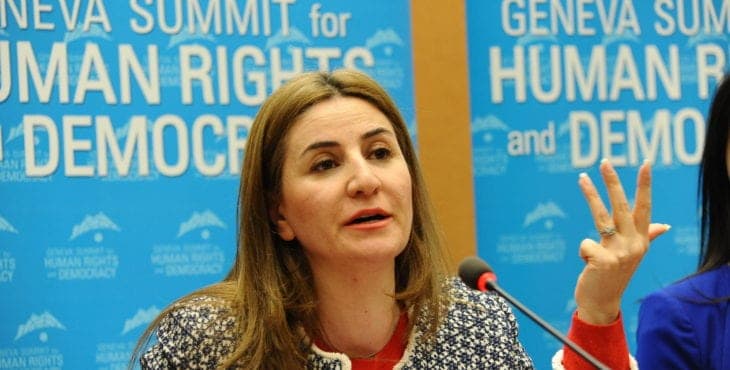 GENEVA, June 16, 2016 — UN Watch welcomed the new finding by a UN commission of inquiry that ISIS is committing genocide against Yazidis (see UN release below), but said much more needs to be done now by the UN Human Rights Council to save victims.

“Because this finding was made only by independent experts and is non-binding, what needs to happen now is for the plenary of the 47-nation council to adopt a resolution before the end of the current June session that officially ratifies the determination of genocide,” said Neuer. “This is vital.”

“To make a difference and help the victims, the council’s resolution should urgently submit its finding to the UN Security Council for protective action, and to all of the state parties of the UN’s 1948 Genocide Convention, under which each signatory country has undertaken to prevent and punish genocide,” said Neuer.

“Unless these minimal steps are taken, the experts’ finding risks being just more words on paper, without protecting a single Yazidi man, woman, or child.”

Testifying in March 2016 before the council, UN Watch said, “Mr. President, we ask: If indeed genocide is happening, why does this UN Human Rights Council session have no resolutions, urgent debates, or commissions of inquiry? Who will address the plight of these suffering victims?”

UN Watch has been a leading voice at the United Nations demanding action to stop the Yazidi genocide:


UN COMMISSION OF INQUIRY ON SYRIA: ISIS IS COMMITTING GENOCIDE AGAINST THE YAZIDIS

GENEVA  (Issued as received)– The so-called Islamic State of Iraq and Al-Sham (ISIS) is committing genocide against Yazidis, according to a report, “They Came to Destroy: ISIS Crimes Against the Yazidis”, issued today by the independent international Commission of Inquiry on the Syrian Arab Republic. The report by the Commission of Inquiry also determined that ISIS’s abuse of Yazidis amounts to crimes against humanity and war crimes.

“Genocide has occurred and is ongoing”, emphasised Paulo Pinheiro, Chair of the Commission. “ISIS has subjected every Yazidi woman, child or man that it has captured to the most horrific of atrocities.”

As per the Commission’s mandate, the report focuses on violations committed against Yazidis inside Syria, where thousands of women and girls are still being held captive and abused, often as slaves. The Commission also examines how the terrorist group forcibly transferred Yazidis into Syria after launching its attacks on northern Iraq’s Sinjar region on 3 August 2014. Collected information documents evidence of intent and criminal liability of ISIS’s military commanders, fighters, religious and ideological leaders, wherever they are located.

The Commission’s findings are based on interviews with survivors, religious leaders, smugglers, activists, lawyers, medical personnel, and journalists, as well as extensive documentary material, which corroborate information gathered by the Commission.

ISIS sought – and continues to seek – to destroy the Yazidis in multiple ways, as envisaged by the 1948 Genocide Convention. “ISIS has sought to erase the Yazidis through killings; sexual slavery, enslavement, torture and inhuman and degrading treatment and forcible transfer causing serious bodily and mental harm; the infliction of conditions of life that bring about a slow death; the imposition of measures to prevent Yazidi children from being born, including forced conversion of adults, the separation of Yazidi men and women, and mental trauma; and the transfer of Yazidi children from their own families and placing them with ISIS fighters, thereby cutting them off from beliefs and practices of their own religious community”, the report says.

ISIS separated Yazidi men and boys over 12 from the rest of their families, and killed those who refused to convert, in order to destroy their identity as Yazidis. Women and children often witnessed these killings before being forcibly transferred to locations in Iraq, and thereafter to Syria, where the majority of captives remain.

Thousands of women and girls, some as young as nine, have been sold in slave markets, or souk sabaya, in the Syrian governorates of Raqqah, Aleppo, Homs, Hasakah and Dayr Az-Zawr. ISIS and its fighters hold them both in sexual slavery and in slavery, the report says, with Yazidi women and girls being constantly sold, gifted and willed between fighters. One woman, who estimated she had been sold 15 times, told the Commission, “It is hard to remember all those who bought me”.

“Survivors who escaped from ISIS captivity in Syria describe how they endured brutal rapes, often on a daily basis, and were punished if they tried to escape with severe beatings, and sometimes gang rapes,”, said Commissioner Vitit Muntarbhorn.

Young children bought and held with their mothers are beaten by their ISIS-owners, and subjected to the same poor living conditions as their mothers, the report states. They are often aware of the abuse that their mothers are suffering. Yazidi boys older than seven are forcibly removed from their mothers’ care and transferred into ISIS camps in Syria where they are indoctrinated and receive military training. One boy, taken for training in Syria, was told by his ISIS commander, “even if you see your father, if he is still Yazidi, you must kill him”.

“ISIS has made no secret of its intent to destroy the Yazidis of Sinjar, and that is one of the elements that allowed us to conclude their actions amount to genocide”, said Commissioner Carla Del Ponte.

The report noted that ISIS, which considers the Yazidis to be infidels, has publicly cited the Yazidis’ faith as the basis for the attack of 3 August 2014 and its subsequent abuse of them. ISIS has referred to the Yazidi as a “pagan minority [whose] existence […] Muslims should question”, adding that “their women could be enslaved […] as spoils of war”.

Mr. Pinheiro stressed that there must be no impunity for crimes of this nature, recalling States’ obligations under the Genocide Convention to prevent and to punish genocide. The Commission repeated its call for the Security Council to refer urgently the situation in Syria to the International Criminal Court, or to establish an ad hoc tribunal to prosecute the myriad of violations of international law committed during the non-international armed conflict.

The Commission further noted that, with no path to international criminal justice available, it is likely that the first such prosecution of ISIS crimes against the Yazidis will take place in a domestic jurisdiction. It is essential, the Commission stated, that States enact laws against genocide, crimes against humanity and war crimes.

The Commission urged international recognition of the genocide, and stated that more must be done to assure the protection of this religious minority in the Middle East, and the funding of care, including psycho-social and financial support, for victims of this genocide.

The full report can be found on the Human Rights Council web page dedicated to the commission of inquiry on the Syrian Arab Republic:http://www.ohchr.org/EN/HRBodies/HRC/IICISyria/Pages/IndependentInternationalCommission.aspx