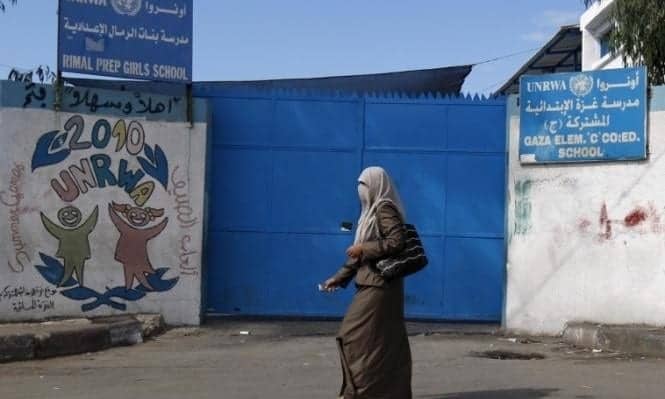 In the wake of U.S. threats to cut aid to the U.N. relief agency for Palestinians, a look at UNRWA textbooks—which deny Jewish rights in Palestine and erase Israel from the map—shows that the agency is violating the basic tenets of the U.N. Charter by fostering conflict instead of maintaining peace and harming Palestinian children.

More than half of UNRWA’s budget—54%—is devoted to education for 500,698 students at 692 schools supported by 21,571 educational staff. Recent media about UNRWA praises its work in education.

But while providing education to underprivileged youth seems like a laudable endeavor, in the case of UNRWA one has to ask: What is being taught? Is the curriculum consistent with the U.N. Charter?

According to a September 28, 2017 study by the Simon Wiesenthal Center and the Middle East Forum, UNRWA textbooks show that there is “no hope for peace in the region.” The study reviewed 150 Palestinian Authority textbooks for grades one to 12, half of which were published in 2016-17. Among other things, the textbooks claim Jews have no rights in Palestine, deny the existence of Jewish holy places there and delete Israel from the map. The books also promote violent struggle as the path to liberation.

This is one of the ways UNRWA, to borrow Prime Minister Netanyahu’s words, “perpetuates the Palestinian refugee problem, and also the narrative of the so-called right of return, whose goal is the elimination of Israel.”

UNRWA Spokesperson Christopher Gunness criticized the study as “inaccurate and misleading” because only 23 of the books were being used in UNRWA schools. He further asserted that these books had been “reviewed rigorously under our curriculum framework, which aims to ensure that our curriculum is in line with U.N. values. In the small number of instances where issues of concern were found, we have created enriched complementary materials for use in our classrooms…”

However, Gunness’s statement is inconsistent with reports from April 2017 about a falling-out between UNRWA and the PA over UNRWA’s proposed curriculum changes. That controversy ended with UNRWA Commissioner-General Pierre Krähenbühl emphasizing that “UNRWA is completely committed to the Palestinian curricula, and that no change will be made in these curricula.”

In November 2017, after Gunness issued his statement, the PA Ministry of Education again reiterated that it categorically opposes any attempt by UNRWA to make any change to the curriculum that would contradict the philosophy of the PA with respect to Palestinian national identity and heritage, i.e., the belief that Jews have no rights in Palestine and that Palestinians will one day return to their former homes in Israel.

Regrettably, inflammatory textbooks aren’t the only problem with the education being provided by UNRWA. UN Watch published detailed reports in February and April 2017, exposing 60 new examples of UNRWA educational staff preaching anti-Semitism and jihadi terrorism to their impressionable students.

In typical UNRWA fashion, rather than tackling the issue head-on by firing the anti-Semitic and terrorist supporting teachers, UNRWA provided them training in what not to post on social media and how to keep social media profiles “private” so that inflammatory social media posts are not publicly viewable. Significantly, UNRWA has never expressed concern about the core underlying problem of students being exposed to anti-Semitism and jihadi terrorism.

The very first purpose of the U.N. listed in Article 1 of the U.N. Charter is “to maintain international peace and security, and to that end: to take effective collective measures for the prevention and removal of threats to the peace…” The second is “to develop friendly relations among nations based on respect for the principles of equal rights and self-determination of peoples…”

Clearly, supporting a curriculum which teaches Palestinians that Jews have no rights in Palestine, that the map of Palestine includes present-day Israel, and that violent struggle is the only way to liberation encourages conflict instead of promoting “international peace,” fosters hatred against Israel rather than “friendly relations,” and fails to respect the Jewish people’s right to “self-determination.”  Thus, it goes against the most basic principles of the U.N. Charter. It also violates UNRWA’s neutrality as a U.N. Humanitarian agency.

It further goes against Article 29 of the Convention on the Rights of the Child, which provides that education should be directed to “[t]he development of respect for human rights and fundamental freedoms, and for the principles enshrined in the Charter of the United Nations.”

It is beyond Orwellian for an agency under U.N. auspices to be using the imprimatur of the U.N. to raise funds ostensibly for humanitarian purposes, and then to use those funds to promote an anti-peace agenda — one that fosters conflict and instability, in complete contravention of the U.N. Charter and the Convention on the Rights of the Child.

The U.S. is right to question the benefits of such funding.