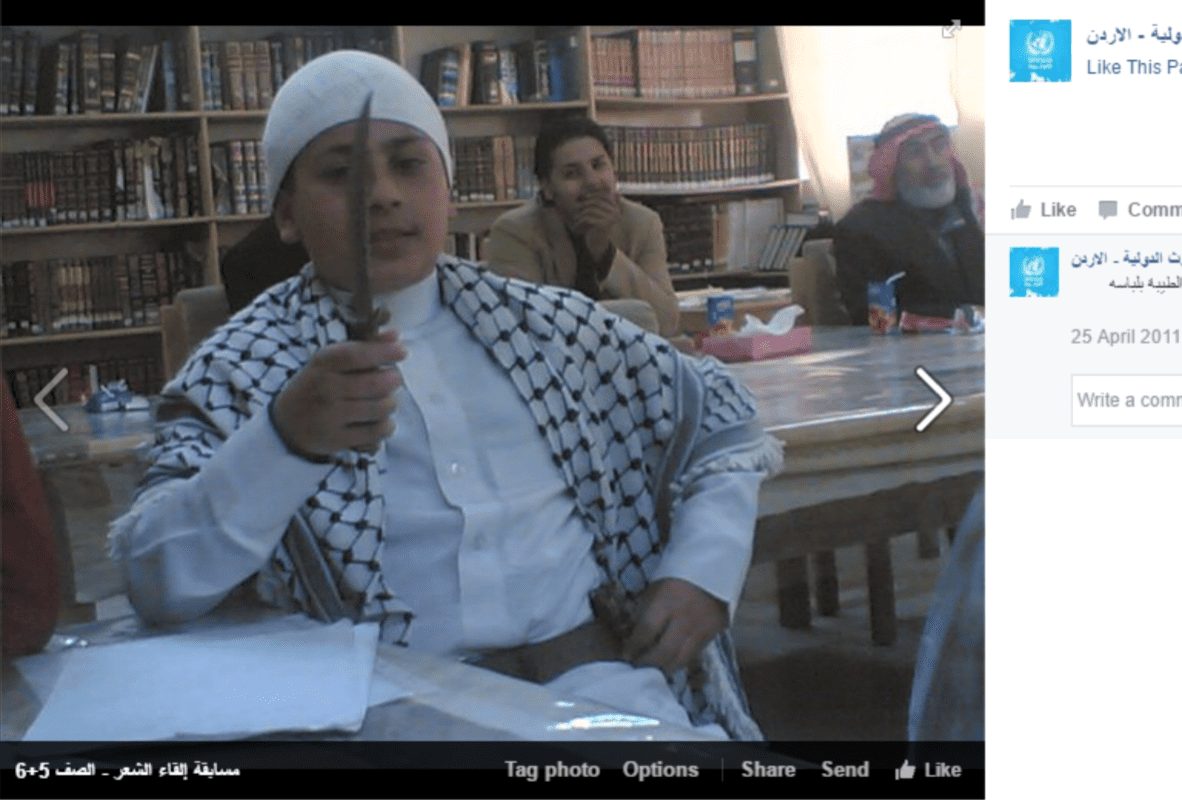 Editor’s Note: following release of our report today, this image of a knife-wielding student
who recited martyrdom poetry was just deleted from the UNRWA Jordan Facebook group,
which has 37,000 followers.

OTTAWA, April 9, 2017 – Teachers and other employees of the U.N.’s Palestinian relief agency, according to a new UN Watch report presented today at the Canadian Parliament, are holding rallies to support the wave of Palestinian stabbings of Israelis, posting pictures and quotes of Adolf Hitler, glorifying Hamas terrorists, and instructing students to erase Israel from the map — and the Canadian government of Prime Minister Justin Trudeau needs to take promised action and ensure perpetrators are fired.    Read:  Full Report | Letter to PM Trudeau

“Despite our prior identification of UNRWA teachers who endorse Hitler and call for killing Jews,” said Hillel Neuer, executive director of the Geneva-based UN Watch, “I am not aware of a single UNRWA teacher who has been fired as a result, calling into question Canada’s claim, when it announced its $25 million funding decision in November, that UNRWA has a policy of ‘zero tolerance.'”

The Trudeau government promised that its funding would be accompanied by “enhanced due diligence,” including a “very robust oversight and reporting framework.”

Evidence of UNRWA’s employment of racists and terrorism supporters was downplayed or dismissed. “Canada is aware that UNRWA has faced allegations on controversial issues, such as neutrality violations,” said Bibeau in November. “Some of them are based on facts and have been addressed. Others are simply unfounded.”

“Today we are submitting the evidence of incitement directly to Prime Minister Trudeau (click here for letter), and demanding substantive action to ensure Canada is not funding teachers who advocate antisemitism and terrorism.”

Internal government emails that were obtained under Canada’s Access to Information Act show a rush to fund UNRWA before ensuring that meaningful anti-racist and anti-terrorism policies were implemented.

See below the report, examples of incitement, and recommendations.

An examination of Canada’s pledge to stop UNRWA teachers
from inciting Jihadist terrorism and antisemitism.

who incite racism or murder—whether on or offline—by immediately terminating them, like Canada does with its own teachers, and to prominently post on its website these and other actions it is taking to root out this insidious conduct by UN staff;
(b) Demand that UN Secretary-General António Guterres and UNRWA Commissioner-General Pierre Krähenbühl immediately condemn their employees’ incitement to terrorism and antisemitism;
(c) Demand that UNRWA conduct a thorough investigation of its facilities and put an immediate stop to all antisemitic or terrorist-inciting activities and images found there;
(d) Demand that UNRWA undertake a comprehensive review of the social media profiles of all UNRWA staff for content that violates UN and UNRWA neutrality;
(e) Work with UNRWA to implement effective monitoring and controls to ensure the neutrality of UNRWA facilities and staff and make public its activities in this regard;
(f) Establish, in concert with other like-minded donor states, an independent, international commission of inquiry with the mandate to examine the nature and extent of incitement to antisemitism and terrorism among UNRWA teachers and other staff, and to recommend remedial action;
(g) Demand that UNRWA be in full compliance with its neutrality obligations prior to releasing any further funds to UNRWA; and
(h) Determine and disclose which of the people identified in 2015 and 2017 by UN Watch of having posted antisemitism and terrorist incitement on their Facebook profiles is still employed by UNRWA, and thereby potentially being funded by Canada.