Only U.S. can stop these outrageously partisan and problematic appointments 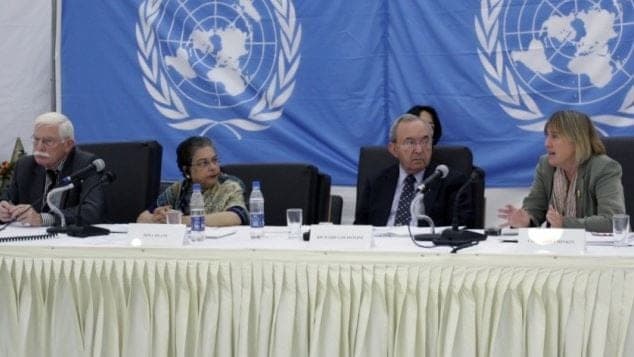 GENEVA, 28 March, 2014— Bowing to new pressure from the powerful Arab Group in the race to replace controversial official Richard Falk, the president of the U.N. Human Rights Council has decided to ignore the vetting committee’s official choice, and instead appoint Christine Chinkin — co-author of the Goldstone Report, and a law professor at the London School of Economics – as the UN’s next special rapporteur on “Israel’s violations of the bases and principles of international law.”

The only power that can yet stop these outrageously partisan and problematic appointments before tomorrow’s plenary decision is the Obama Administration.

When council president Baudelaire Ndong Ella tomorrow moves the nominations, the U.S. — if it is to live up to its pledge to use its UNHRC membership to fight bias, politicization and double standards — must take the floor, call a vote, and vote No.
Because the UN desperately seeks to make such appointments by consensus, the president may change his mind if he knows in advance and for certain that the U.S would challenge these two objectionable nominations.
If the U.S. fails to call a vote and stand up for what is right, it will have forfeited its moral justification for serving on a council that just elected Putin, the Castro regime, the Chinese Communist Party, and the House of Saud.
Like her husband Richard Falk, Elver has promoted the writings of the world’s leading 9/11 conspiracy theorist, accused Israel of “genocide” and “Water Apartheid”, and systematically blames Western society for the world’s ills, accusing America and Europe of systemic Islamophobia and racism. UN Watch summarized her failure to satisfy the job’s minimum requirements here.
UN Watch has launched an urgent online campaign appealing for the U.S. government to take action tomorrow.
Yesterday, in an aggressive letter from the Arab Group, the council president was told in emphatic terms that “there is only one appropriate candidate for the position,” that “Professor Chinkin remarkably fulfils the criteria,” and “any deviation could set a dangerous precedent, which we would want to avoid.”
Although Indonesia’s Makarim Wibisono had been widely reported by diplomats as the slated pick, in the end the Arab states, following Ramallah’s lead, only wanted Chinkin. A proven, pro-Palestinian legal campaigner, in their view, will be far more effective to promote their global lawfare and BDS agenda than a Muslim diplomat.
Chinkin was famously criticized by fellow UN human rights expert Sir Nigel Rodley and others for having failed to recuse herself from the Goldstone inquiry despite having issued a prior statement declaring Israel guilty on the very legal question put before her commission.
Sir Nigel, Chairperson of the UN Human Rights Committee and a fellow English academic, criticized Chinkin’s failure to recuse herself from the mission, saying “there was regrettably a basis for questioning the appearance of bias” as a result of her public letter.
“If such a statement were made by a member of a standing fact-finding body,” wrote Rodley, “it could be expected that such a member would move to recuse himself or herself from the hearing of the issues.”
Chinkin was also criticized by a larger group of academics assembled by Chatham House, which, in diplomatic but unmistakable language, rebuked her by emphasizing that ”fact-finding missions should avoid any perception of bias,” that its members should not “act in a way that would damage their impartiality,” and should “therefore exercise great care when writing or speaking on international disputes that could potentially be subject to an investigation.”
When Goldstone in 2011 famously retracted the core charge of the Goldstone Report — that Israel killed civilians on purpose — Chinkin joined with two others in attacking him.