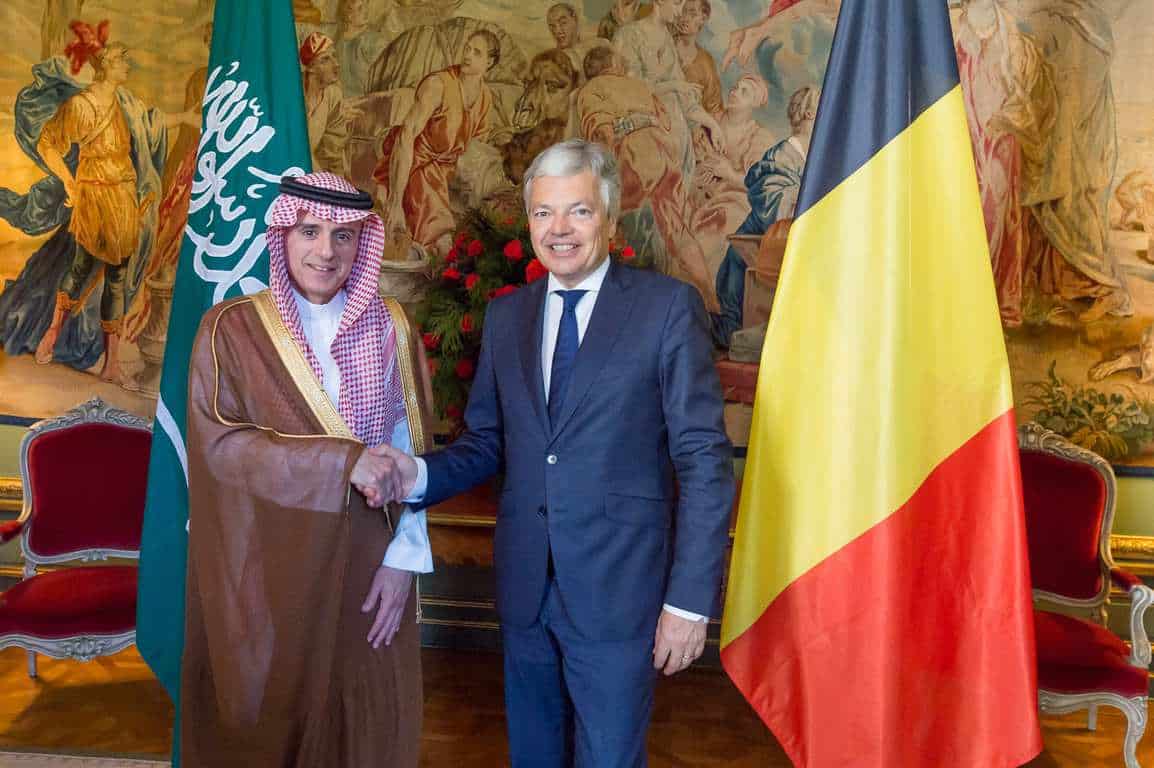 April 19, 2017 – the UN Economic and Social Council issues press release announcing Saudi Arabia’s election to the Commission on the Status of Women.
April 22, 2017 – UN Watch publishes statement on its website condemning election of Saudi Arabia to Commission on the Status of Women: No Joke: UN Elects Saudi Arabia to Women’s Rights Commission.
In Belgium, the story broke on April 24, 2017 and is still generating headlines. Politicians on all sides were highly critical of the government’s apparent ‘yes’ vote, forcing a public apology from the Prime Minister.

Belgian Government, coalition partners and opposition parties regarding the notice Reynders had of the vote:

Green Party opposition meanwhile caught mails showing that Minister Reynders almost had a day to answer. It is now awaiting what explanation Reynders comes to the committee. According to various members of the opposition, the MR minister carries the political responsibility in this dossier. On Sunday, coalition partners CD & V understood that they believed that Reynders was “politically” unaware. If it turns out that’s not true, “there’s a problem,” said CD & V-member Els Van Hoof.

Heard in the Foreign Affairs Committee of the Chamber, Didier Reynders in his turn apologizes to those shocked by the Belgian vote in favor of Saudi Arabia for a place in the UN Committee on the Status of Women .
He reaffirmed once again that he was not personally aware and said he wanted to re-establish relations with Saudi Arabia, notably relaunching the debate on the arms embargo, a very sensitive issue in Wallonia . A manoeuvre described by Minister Marcourt as a “smoke screen”, because “Didier Reynders is in great difficulty”.

Asked about the issue, Prime Minister Charles Michel said ” regret the vote expressed on the Belgian side “, pretexting a lack of time on the side of diplomats to see what position to adopt.
Nevertheless, a letter tends to show that the Cabinet of Foreign Affairs was aware as well as that of Alexander De Croo. Reynders denies, saying that ” there is no contradiction between the Prime Minister and me.” He stressed that a negative vote by Belgium would not have changed much, but admitted that the procedure had to be changed.

The Prime Minister told the House that contacts were taking place between New York and the ” ministry “. And he spoke of the very short period of time in which he had to act, ” a few hours ” according to him, ” three hours “, according to Didier Reynders. However, the e-mails show that the decision was taken by Reynders, at least nine hours after the solicitation, taking into account the informal exchanges.

“Even if it finally turns out that Minister Reynders was not personally informed about the voting process, he must endorse the political responsibility of his cabinet”

“A ‘yes’ vote from Belgium is simply shocking and punched in the stomach of anyone who fights for women’s rights,” says De Vriendt. Minister Reynders not dare to divest Saudi Arabia for the head and he legitimizes the country is an example of how not to worldwide violations of women Women are victims of systematic discrimination.. Not by car may ride, politics should play no role, not only movements and even decisions (financial, in terms of marriage, …) which are only taken by the man. “

“Our vote was then decided at the diplomatic level,” reports the Minister Reynders. “Belgium was indeed taken into speed,” confirms Van Hoof, “but we have to prepare ourselves better.”

Reynders himself meanwhile stressed the importance of dialogue, ‘how small the chances are that it seems to work. ” Even Deputy Prime Minister Alexander De Croo (Open VLD), the news tried to put a positive spin. “I prefer to speak with people who have a different opinion, then they turn their backs and to be sure that nothing will improve for the women there.”

Peter De Roover (N-VA) hopes that Belgium has at least tried “to move the European countries collectively to a no vote. That the Saudis still sit on the committee, has major consequences for him. “As long as that country is in the Women’s Committee, the N-VA regards the commission as totally irrelevant. We will not accept any report of that body.”

Faced with such controversy, Prime Minister Charles Michel said he regretted Belgium’s vote on the entry of Saudi Arabia into the UN Women’s Law Commission.
If the explanations of Charles Michel were relatively well perceived, the PS asks on the other hand ”  the eventual resignation  ” of Didier Reynders, Minister of the Foreign Affairs, if it were proved that he ”  lied  ” on the decision to vote in favor Of Saudi Arabia. The latter had, indeed, argued in committee not to have been aware of this vote. A statement that has difficulty to pass as well to the government as to the Belgians.