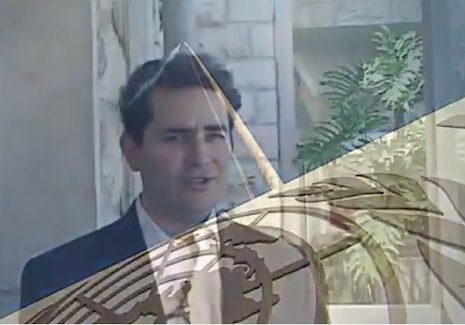 CLICK FOR VIDEO
EXCERPTS FROM FILM INTERVIEW WITH HILLEL NEUER:
When I started at UN Watch, I knew something about what the United Nations was, but I think until I got there, I never had a clue of what it felt to be in a room where the worst dictators, murderers, and tyrannies of the world, sit there and pronounce themselves on human rights, accuse others, and repeatedly, time after time, scapegoat one nation—the State of Israel—as the world’s only criminal on human rights.

It can make you sick in the stomach. Actually, if I don’t need to be in a session and I can have my assistants sum up things, that’s better for my health.

Rise and Fall
The United Nations Human Rights Commission was founded by one of the great humanitarians, Eleanor Roosevelt.

But over time this body became hijacked, and by 2003 the dictatorship of Colonel Moammar Gaddafi was elected to chair the Human Rights Commission.
So, 1946, Eleanor Roosevelt; 2003, Colonel Gadhafi. The decline of human rights at the United Nations.

Not There to Help Victims
I’ll never forget when the coup d’état happened in Gaza, when Hamas violently ousted the PLO. I happened to be at the United Nations Human Rights Council during that time.

One speaker after another from Arab states, Islamic states, were accusing Israel of massive violations of human rights against the Palestinians, of violating the laws of war.
I was listening in my earpiece to these speeches, and yet on my computer screen I was watching the news of what was happening on the ground.
And the news was that Hamas was pushing PLO officials off of roof tops, that in the Gaza city of Beit Hanoun, Hamas officials entered a hospital and had seen PLO officials who were wounded on hospital beds, and they were taking out guns and shooting them, saying, “You don’t look bad enough.”
So that’s what was happening on the ground. The disconnect between what is said at the UN and what’s actually happening on the ground hurts the victims.

They are not there to help the victims. They are there to scapegoat. It is part of a narrative, where Israel is this meta-criminal.
Most Hated Person at the UN
I have become the most hated person at the United Nations. When I walk into the Human Rights Council, I feel the glares of hatred, of enmity directed at me.

I see it in their eyes. It’s from dictatorships, it’s from Arab states, it’s from others — sometimes even from some democracies.

But those sitting around the table at the Human Rights Council are not Socrates, Plato, and Aristotle. In fact, it’s Gadhafi, Castro and the House of Saud.

Europeans don’t realize that, and they don’t want to know that. They have really a fantasy, which is very beautiful and it’s very pretty, but it hasn’t been true in perhaps five decades.
Why the UN Matters
Like it or not, the UN matters. The United Nations is the single most important repository of international legitimacy, and people around the world believe in the UN.
Even though things are upside down, we need to be there and we need to fight lies and spread the truth.

CLICK FOR VIDEO
For more information on the film, “Beyond Paranoia: The
War Against the Jews” by filmmaker Monique Schwartz, click here.

A Day in the Life of the UNHRC