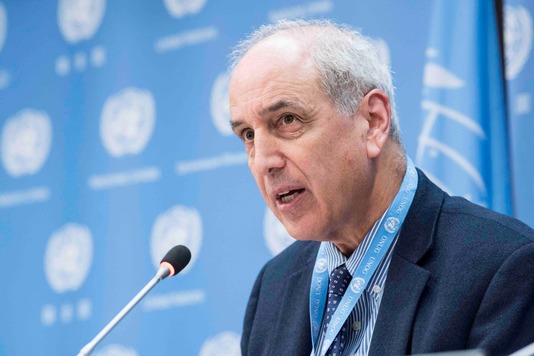 Michael Lynk, who investigates ‘Israel’s violations,’ was challenged this week by UN Watch.

GENEVA, October 30, 2017 – The United Nations must “review Israel’s status as a law-abiding member” of the world body by declaring its “occupation as illegal,” said Michael Lynk, the U.N. rapporteur for Palestinian human rights, as he called for the international community to adopt new measures against the Jewish state, at a U.N. press briefing on Thursday.
What if, “all of a sudden Israelis wanting to travel abroad needed to have visas [or if] Israel wouldn’t get preferential trade agreements with the EU?” Lynk asked. “What if the many forms of military, economic or academic cooperation with Israel would now end?”
However, Lynk was challenged repeatedly by journalists in wake of a UN Watch letter, released ahead of his U.N. appearance, documenting how his biased mandate systematically ignores Palestinian Authority and Hamas torture and arbitrary arrest, and Palestinian stabbings, car ramming attacks and shootings committed against Israelis.
UN Watch’s letter cited precedents to demonstrate how Lynk could address Palestinian abuses even though his mandate from the U.N. is to “investigate Israel’s violations.”
Former rapporteur John Dugard once reported on Palestinian misuse of the death penalty, saying that it would be ‘irresponsible’ for a U.N. human rights expert to ignore it. Another former rapporteur, Hannu Halinen, cited Palestinan Authority torture, and called for his one-sided mandate to be reformed.
Lynk told reporters he was ‘unaware’ he could raise violations that were committed by Palestinians, even though UN Watch has repeatedly sent him reports and letters saying exactly that.
MICHAEL LYNK PRAISES ANTI-SEMITES, MEETS WITH HAMAS AFFILIATES
In June, when UN Watch’s Dan Smith challenged Lynk’s silence on Palestinian abuses at a U.N. meeting, the U.N. rapporteur replied that no group had ever before asked him to do so.
However, Lynk only meets with groups that share his partisan approach, including those he assembles in Amman.
For example, Lynk recently met with the Hamas front group known as PRC, and with the virulent antisemite Sameh Habeeb, who posts antisemitic videos by former KKK grand wizard David Duke, publishes stories accusing Israelis of stealing organs in Haiti, and articles claiming that World Wars I and II were both Jewish plots.
Earlier this year, Lynk’s annual report to the Human Rights Council praised Palestinian antisemite Manal Tamimi as a “human rights defender.”
As exposed by NGO Monitor, however, the activist Tamimi has tweeted about “Vampire zionists” who celebrate “by drinking Palestinian bloods” and she advocates a “third Intifada” for people to “rise up and kill all these zionist settlers everywhere.”
Lynk was forced to remove the section on Tamimi in a new edition of his report, but he never acknowledged or apologized for his praise of a racist advocate of violence.
UN WATCH LETTER TO LYNK

The head of the U.N.’s World Health Organization revoked the appointment of 93-year-old Robert Mugabe, Zimbabwe’s brutal dictator, as a “Goodwill Ambassador” who would help fight disease.
The reversal came after UN Watch sounded the alarm, launching a protest campaign against what it called an absurd, immoral and insulting decision.
Canadian Prime Minister Justin Trudeau and the US and UK governments joined the chorus of voices expressing shock and outrage.
Now UN Watch is calling for an independent investigation into the circumstances that led to the suspect appointment.
UN Watch’s protest of the WHO appointment was quoted extensively by the New York Times, Reuters, Washington Post, CNN, and by more than 100 other news outlets worldwide, as well as by thousands on Twitter and Facebook.
UN Watch director Hillel Neuer was interviewed by Radio France and Canada’s CTV News (click for video).
MEDIA QUOTES
CNN – Mugabe picked as goodwill ambassador
The World Health Organization is under fire after it selected Zimbabwean President Robert Mugabe as a goodwill ambassador. “The government of Robert Mugabe has brutalized human rights activists, crushed democracy dissidents and turned the breadbasket of Africa — and its health system — into a basket case,” said Hillel Neuer, executive director of UN Watch, which monitors the performance of WHO, a UN agency that focuses on international public health. “The notion that the UN should now spin this country as a great supporter of health is, frankly, sickening.”
CNBC – Choice of Mugabe as WHO envoy shocks human rights groups
Hillel Neuer, executive director of the Geneva-based group UN Watch, issued a statement late on Friday criticizing the choice by WHO, a United Nations agency.
Newsweek – Beyond satire? African dictator Mugabe, former President Obama and Saudi Arabia have more in common than you think
The appointment of Zimbabwe’s President Robert Mugabe as a goodwill ambassador of the World Health Organization (WHO) has been denounced by human rights groups. Newsweek reviewed five more international appointments that have caused consternation.
In 2015, the United Nations came under fire for handing Saudi Arabia a role on its human rights council, and in April there was renewed criticism when the Kingdom was given a role on the UN women’s rights commission.
Hillel Neuer, director of UN Watch, pointed to multiple restrictions placed on women’s rights in Saudi Arabia, likening the move to “making an arsonist into the town fire chief.”