When the UN Human Rights Council met for an entire day to attack Israel, accusing the Jewish state of war crimes in 7 biased reports and 5 condemnatory resolutions, UN Watch led an international coalition of 24 organizations for a historic protest rally in front of Geneva’s Palais des Nations on March 18, 2019.
U.S. Ambassador to Germany Richard Grenell, lawmakers from the European, Dutch and Czech parliaments, and eminent intellectuals and national security experts delivered powerful remarks before a crowd of more than 1,000 people who came from across Europe. Israeli-Ethiopian singer Hagit Yaso delivered a moving musical performance. (Click here for quotes from speakers)
Under the banner of “Enough Is Enough,” UN Watch’s Rally For Equal Rights at the UN was the most significant gathering of its kind to demand an end to discrimination against Israel. UN Watch will be sending out a series of the top speeches from the event, beginning with the one below from leading French intellectual Philippe Val.
In addition, more than 10,000 people worldwide joined the campaign by signing UN Watch’s online petition against UN bias, presented to the world body later in the day.
News Impact
The protest rally was reported around the world, including by Agence France Presse, Voice of America, Dutch newspaper Reformatisch Dagblad and The Jerusalem Post.
Voting Impact
In wake of UN Watch’s rally and campaign, the UN vote later that week saw several countries suddenly change their positions on the annual votes—to greater support for Israel.
• Britain for the first time in history voted ‘No’ to all four Arab-sponsored resolutions tabled under the anti-Israeli Agenda Item 7.
• Denmark, a new member of the Council, fully backed Israel on the four votes, a marked departure from its usual policy in UN bodies.
• On the annual resolution calling to prosecute IDF soldiers for “war crimes,” Brazil, Hungary, and Ukraine changed their votes to ‘No.’
• On the annual resolution calling on Israel to surrender the Golan to Syria, Japan and Brazil changed their votes to ‘No.’
Together, UN Watch and its allies are effecting change. But we still have critical work to do to combat the UN’s scapegoating of Israel and the Jewish people.
The Speakers
The rally featured prominent speakers, including:
• Welcome: Ambassador Aviva Raz Shechter, Permanent Representative of Israel to the UN

WHAT DID WE PROTEST?

On March 18, 2019, the UN Human Rights Council launched an unprecedented assault on the rights of Israelis, and on the UN’s own founding principles, in the form of seven biased reports that accuse Israelis of “war crimes” and other human rights violations.

The week culminated with the adoption of five biased resolutions condemning Israel, which made no mention of Hamas or the PA.
Enough is enough.
WHAT DID WE DEMAND?
We are demanding an end to the prejudice and injustice of the UN’s relentless bias and demonization of the Jewish nation, and against the betrayal of their own founding values.
For more information and resources on our campaign to protest the UN’s anti-Israeli bias, see the following links:
Side Event: Expert Response to Gaza Commission of Inquiry
• Live Webcast
• Quotes
• Photos: Hi Res
• Video
UNHRC Plenary – UN Watch Interventions in Debate on Israel/Palestine
• Photos: Hi Res
• Video
Rally for Equal Rights at the United Nations: A Protest Against-Israeli Discrimination
• Quotes
• Photos: Hi Res | Facebook
• Video
• Twitter 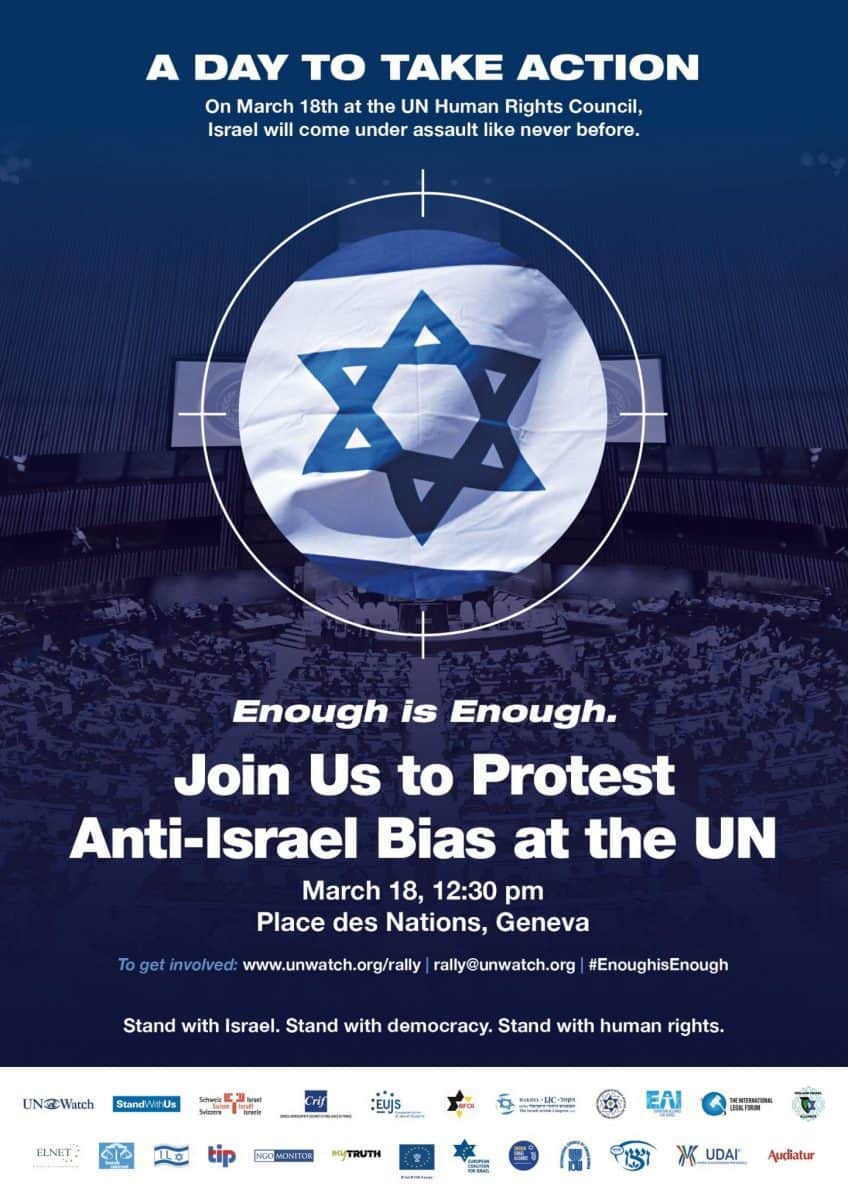