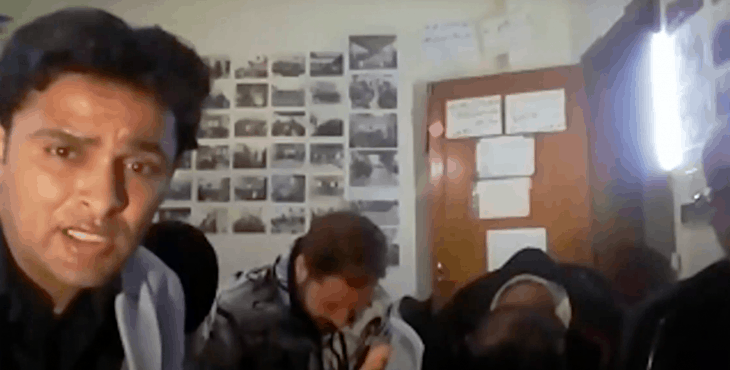 April 6: Rami Aman, founder of a Gaza youth activist group, conducts a Zoom video call with more than 200 Israeli and Gaza peace activists. An invitation to the Zoom conference was posted on Facebook for an opportunity to “open a channel of communication between Gazans and Israelis.” During the call, Aman encourages participants to believe in peace and continue advocating for change.

Screenshots of her posts are in this thread:

6. And the most infamous of Hind Khoudary's vituperative denunciations of Gaza peace activist Rami Aman, on April 9th, came at 1:55 am: when she tagged 3 Hamas officials to get their attention & get Rami arrested.

Note on the left: she describes herself as working for Amnesty. pic.twitter.com/jAvlY38hht

April 9: Hamas authorities arrest Rami Aman. He disappears, and has not been heard of since. His arrest is announced on Facebook by Hamas Interior Ministry spokesman Iyad El-Bozom, and reported by Reuters, Associated Press, AFP, and many others.

Another group, the Association of Palestinian Independent Personalities, distanced itself from Rami Aman (who apparently had listen a connection to the group), and it praised Hamas’ actions, saying:

“We affirm our respect for and appreciation of the [Hamas] security forces to prosecute all those who engage in such behaviors that contradict our national values and harm our people’s interests, and we demand that that they hold them accountable.”

April 10: The New York Times reports on the arrest of Rami Aman, and on the particular role played by Hind Khoudary: “He [Rami Aman] came in for vituperative criticism online, and early Thursday morning, a freelance Gaza journalist, Hind Khoudary, posted angry denunciations on Facebook of Mr. Aman and others on the call, tagging three Hamas officials, including Mr. Al-Bozom, to ensure it got their attention.

New York Times Gaza reporter Iyad Abuhweila would come under scathing attack from Palestinian groups in Gaza for having reported Khoudary’s role. One Hamas-linked social media account pointed the finger at the Times in this video (at 3:40).

April 11: Long-time Human Rights Watch official Peter Bouckaert condemns Khoudary for reporting Rami Aman, and removes her from a private Facebook group. “You should be ashamed of yourself,” Bouckaert writes to Khoudary.

It is disgusting that a so-called ‘journalist’ got an activist for dialogue arrested by Hamas. Hind was in a journalist group I run on Facebook and I kicked her out immediately. Conflicts are resolved through dialogue and understanding, not hatred. Feel free to disagree with me, I need to free up some friend space! You make peace with your enemy, not your friends.

April 12: UN Watch calls for the release of Rami Aman and is the first to point out that Hind Khoudary was affiliated with Amnesty and that her Facebook profile page, even at the time that she denounced Rami Aman, listed herself as working with Amnesty International. UN Watch calls on Amnesty International to launch an inquiry into why they hired someone with such an overt record of supporting terrorism. UN Watch repeatedly urges Amnesty to speak out.

April 12:  Hind Khoudary doubles down by justifying her actions and decrying “normalization” with Israel, calling dialogue with Israeli peace activists an unacceptable “crime” that ignores the role of “Israeli state and citizens” in the “ethnic cleansing” of Palestinians. Khoudary censures Palestinian peace dialogue and engagement with Israelis as “collaboration with enemies.” See more comments here.

Khoudary makes a series of posts bitterly complaining about New York Times reporter Abuhweila for having told the world about her role in reporting Aman to Hamas without ever asking her. (Most are now unavailable due to Khoudary disabling her Facebook account.)

In one later tweet, she wrote “I hope New York Times starts asking people before they highlight them in their articles, take their permission, and stop writing their own assumptions and analysis on the behalf of others.”

April 12:  The Palestinian Journalists Syndicate issues a statement condemning UN Watch for having called out Khoudary, and singling out the New York Times’ journalist in Gaza for not obtaining Khoudary’s permission before reporting her role:

The Journalists Syndicate also reminds of the necessity to adhere to the profession and not to publish any information and attribute it to anyone without obtaining their approval because this is considered a professional violation, as happened by one of the fellow journalists working for an American media out of the Gaza Strip, where he referred to colleague Hind in a previous report published on the 10th of April, without consulting her or obtaining her permission, which resulted in defamation of her through platforms of the occupation government, including UN WATCH.

It is noteworthy that his colleague Al-Khudari worked as a reporter in the Gaza Strip with several Arab and international institutions over the past four years and is well known for her high professionalism and is an integral part of the Palestinian media.

April 13: UN Watch’s social media posts on Facebook and Twitter are widely shared, and many people call on Amnesty to speak out and criticize Hind Khoudary for reporting Rami Aman to Hamas. See more posts here, here, here, and here.

April 13: Numerous other Hamas-linked social media accounts back Hind Khoudary, as reported in an article attacking UN Watch on the Hamas-linked website Arab 48, a platform blocked by the Palestinian Authority.

April 14: Anti-Israel activists in Gaza discover that Hind Khoudary herself had written for an Israeli magazine. She apologizes.

April 17: Hind Khoudary speaks out against the New York Times for their report on her role. UN Watch continues to press Hind Khoudary and call on Amnesty to free Rami Aman.

April 18: Hamas propaganda agency Shehab News” posts 10-minute video justifying the arrest of Rami Aman, and attacking “normalization” with Israel. The role of UN Watch was singled out (at 3:50).

May 5: UN Watch appeals to Amnesty International Chair Sarah Beamish, a lawyer in Toronto, to speak out.

May 6: Finally, Amnesty International changes course, publishing a “research” statement on their website calling for Aman’s release, and declaring him a prisoner of conscience.

May 7: UN Watch publishes open letter urging Amnesty to actively campaign for Aman’s release as they do for other prisoners:

Dear Sarah Beamish, Chair of Amnesty International:You're a lawyer in Toronto, and I'm a lawyer originally from…