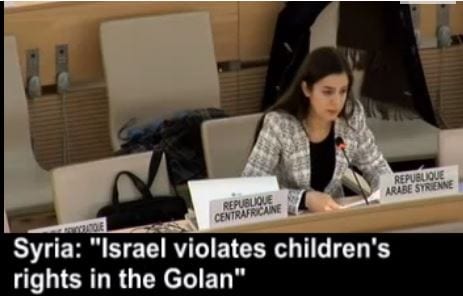 GENEVA, March 14 – At the UN Human Rights Council on Friday, Syria accused Israel of violating human rights of children in the Golan, while diplomats met in another chamber on the same day to discuss a Syrian-drafted resolution, to be adopted next week, entitled “Human Rights in the Occupied Syrian Golan.” There will be five other resolutions targeting Israel, and about the same number on the rest of the world combined.

While this year Syria did not officially present the text, its delegate sat on the dais next to his Pakistani colleague who chaired the session on behalf of the Islamic group. Not a single diplomat called out the sheer lunacy of the exercise. Rather, the EU commented that it was “committed to the protection of all, including those in the occupied Golan.” It was willing to “constructively engage on the text,” even as it noted that its proposals last year were not implemented. Egypt said it aligned itself with the Islamic group.

Later in the day, UN Watch had occasion to take the floor in the plenary: 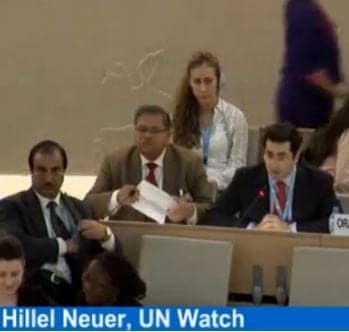 This Council is charged with promoting and protecting the guarantees enshrined in the Universal Declaration of Human Rights.

Today we ask: is the Council fulfilling its mission?

Let us consider the most basic right: the right to life.

As we heard this week from Amnesty International, Saudi Arabia is preparing imminently to execute seven alleged child offenders including Sarhan Al Mashayekh—who was also sentenced to be crucified over three days. Why is the Council refusing to address this in any resolution, urgent session, or even debate? [Ed. note: the Saudis executed them today by firing squad.]

Three other countries known to execute juvenile offenders are Yemen, Sudan and Iran—yet none of these situations is being addressed by any resolution.

And while there is a resolution on Iran, it is silent on child executions—and indeed the text is devoid of any documentation whatsoever of the regime’s other massive abuses, including against women, religious and ethnic minorities, and dissidents.

Finally, the Council must do far more about the thousands of children subjected to violence and death in Syria.

Now, today we just heard from the Syrian representative about human rights in the Golan Heights. This was a transparent attempt to change the subject from the dire, catastrophic human rights situation in Syria.

Sadly, this has been going on for decades. The United Nations has allowed Syria to present itself as a champion of human rights.

Indeed, a resolution was circulated today—presented by Syria—the same one that has been adopted each year by this Council, on purported human rights violations in the Golan Heights.

This text embodies all that is wrong with giving Syria a free pass. Year after year, the UN enabled Syria to portray itself as a champion of human rights.

– While Hafez al-Assad was murdering 20,000 people in Hama, in 1982, Syria was sitting here, as an elected member of the human rights commission. Two years later, it was reelected.

– A year and a half ago, Syria was elected to two human rights committees of UNESCO.

– A few weeks ago, Syria was elected Rapporteur of the decolonization committee dealing with human rights.

Let us be clear: the situation in Syria today was allowed to develop, and the Syrian regime was allowed to remain in power, in part because the United Nations granted false legitimacy to this murderous regime.

PrevPreviousIssue 422: Communist regime lashes out, accuses UN Watch of being "paid for and financed by the U.S government," says it "lacks credibility and legitimacy"
NextAppeal for International Inquiry into the Death of Oswaldo PayaNext