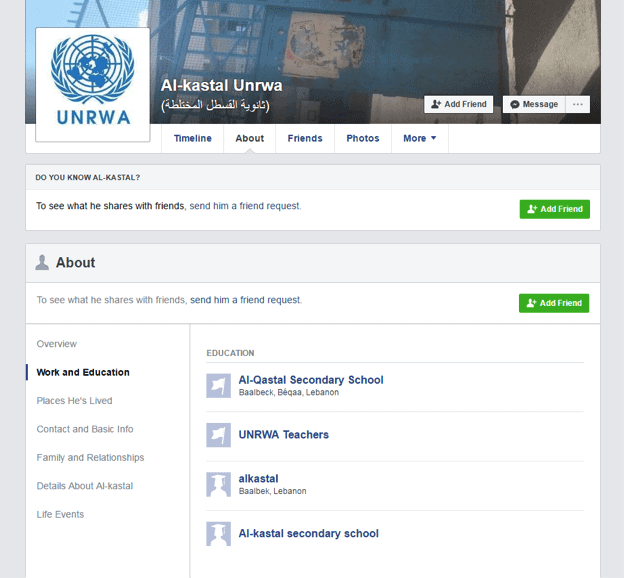 UNRWA’s Al-Qastal Secondary School, located in Baalbek, Lebanon, or and administrator acting in its name, operates the Facebook account featured above. In October 2015, during the beginning of an outbreak of Palestinian terrorist attacks in what later became known as the “Knife Intifada,” UNRWA Al-
Qastal posted an album of photos from a “Student March” that the school held “in support of the uprising in Jerusalem.” The rally featured “cheers in support of the intifada.”

On October 21, 2015, Al-Qastal UNRWA School posted the following album of photos from a rally celebrating the outbreak of Palestinian stabbing and car-ramming attacks against Jewish civilians in Jerusalem. Image 1 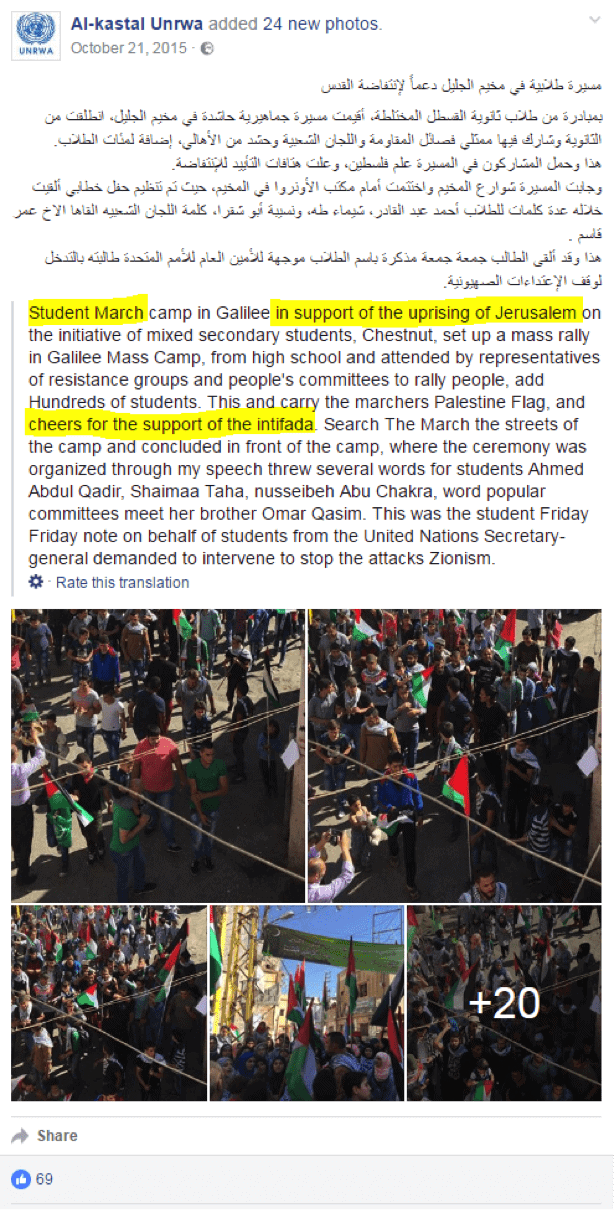 Image 2 shows female students from the Al-Qastal UNRWA school are seen marching in the parade for the Knife Intifada, wearing their light-blue UNRWA school uniforms. On the wall in the background behind the marchers is an image that erases Israel from the map. 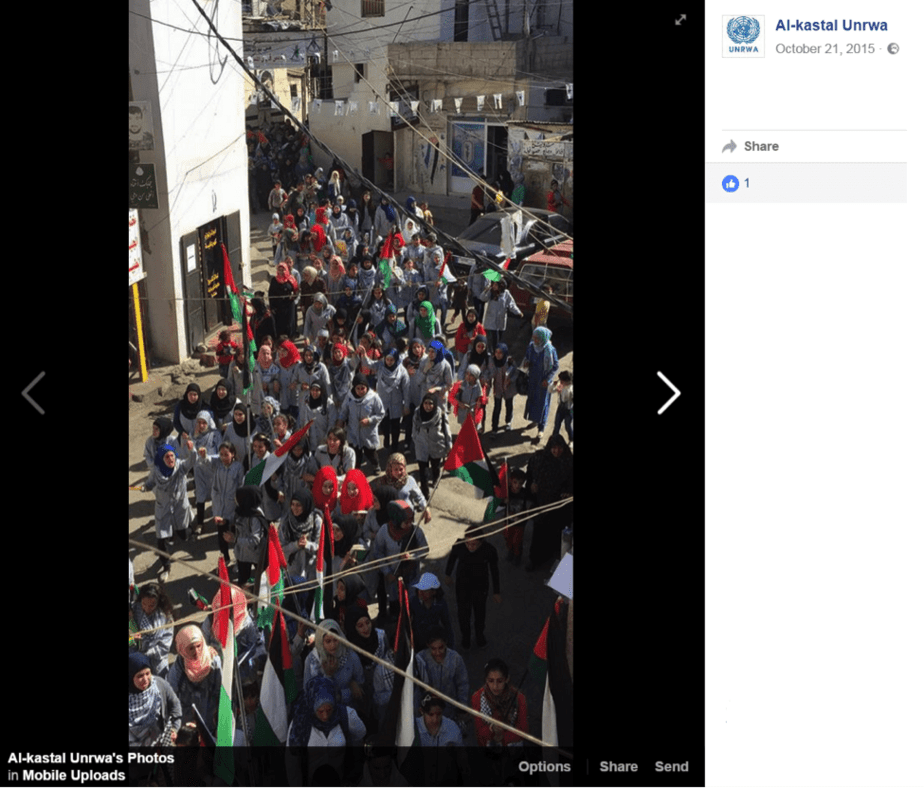 A row of UNRWA teachers march arm in arm, following their students, in the march of hate in Image 3. 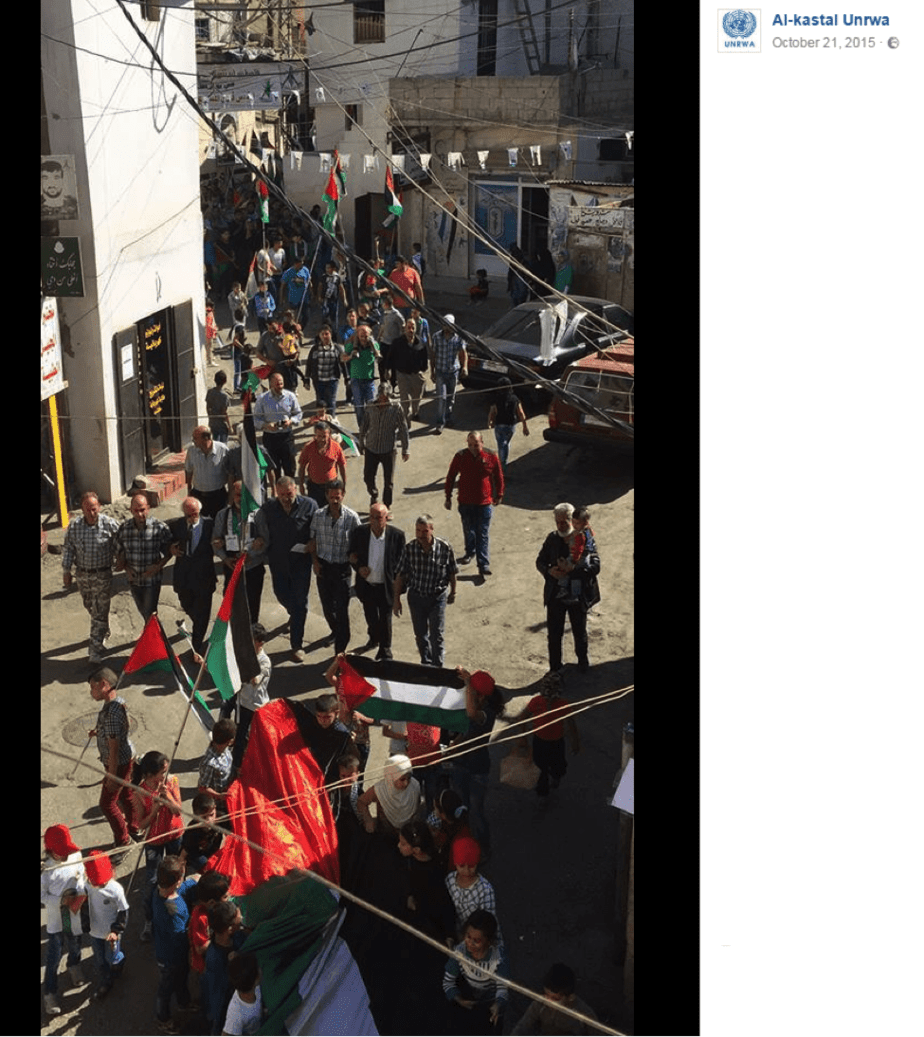 UNRWA teachers stand behind a student reading a statement at the Knife Intifada march. In
the background, a light blue UNRWA plaque can be seen, along with drawing on the wall that says “UN”. Image 4 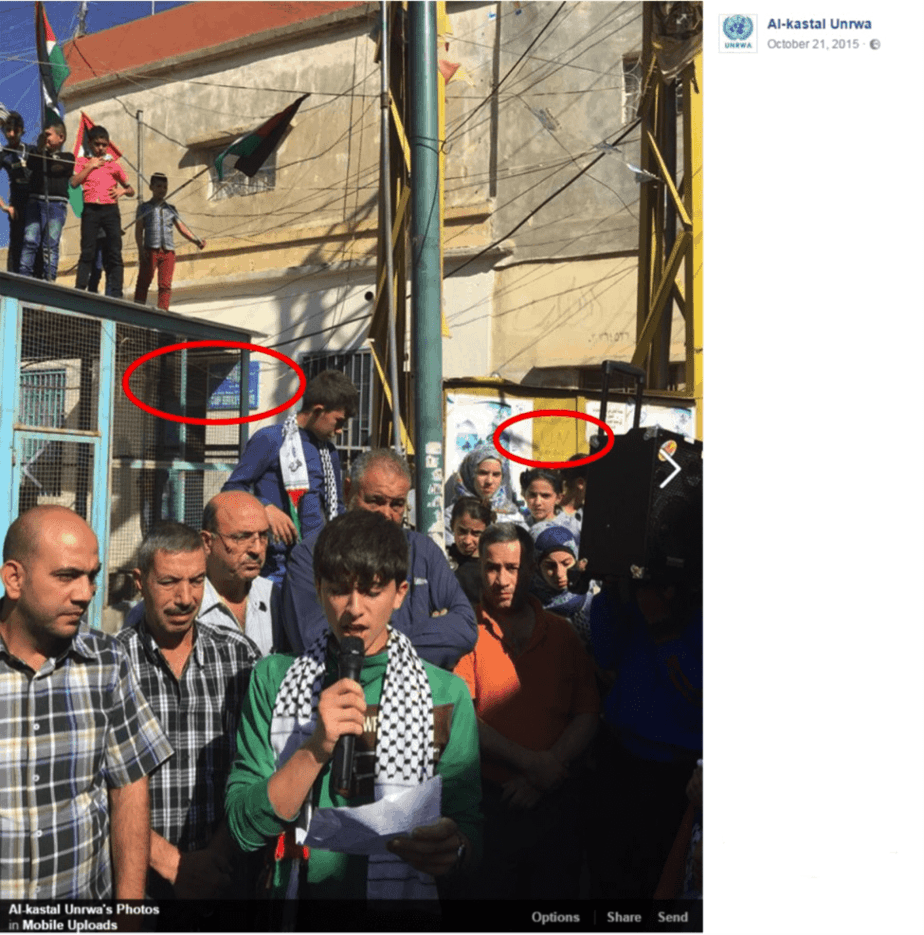 UNRWA teachers deliver a statement to their students at the march. One teacher can be
seen wearing a Palestinian scarf that erases Israel from the map. The letters “UN” appear on the wall in the background. Image 5. 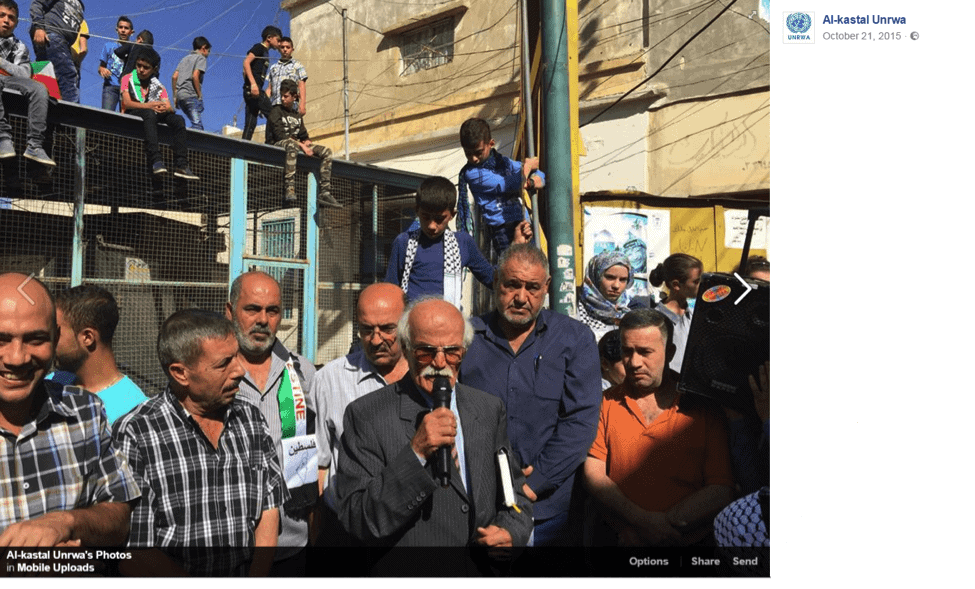 Several teachers seen at the Knife Intifada rally appear in these photos from March 11, 2014 of Al-Qastal’s “Teachers Day,” confirming that they are UNRWA teachers. Image 6 & Image 7. 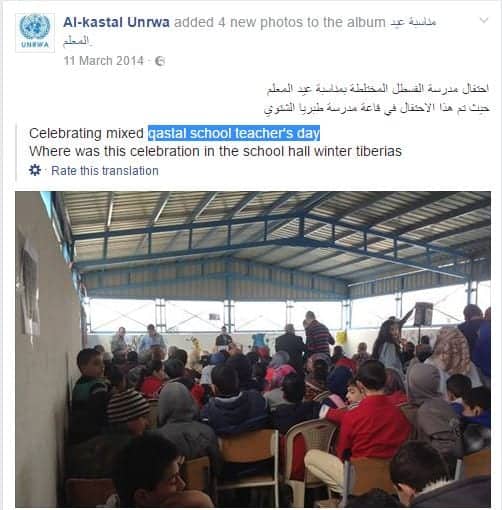 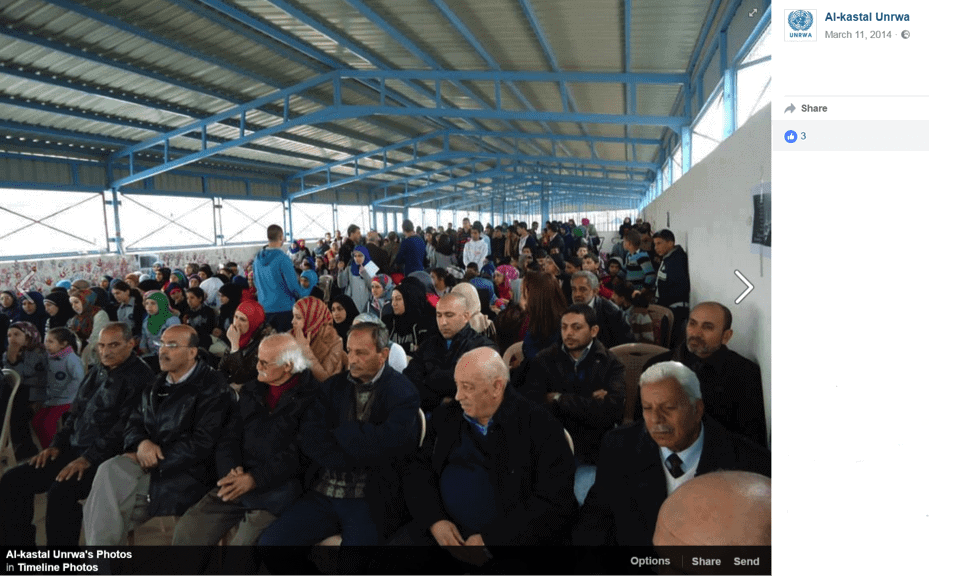 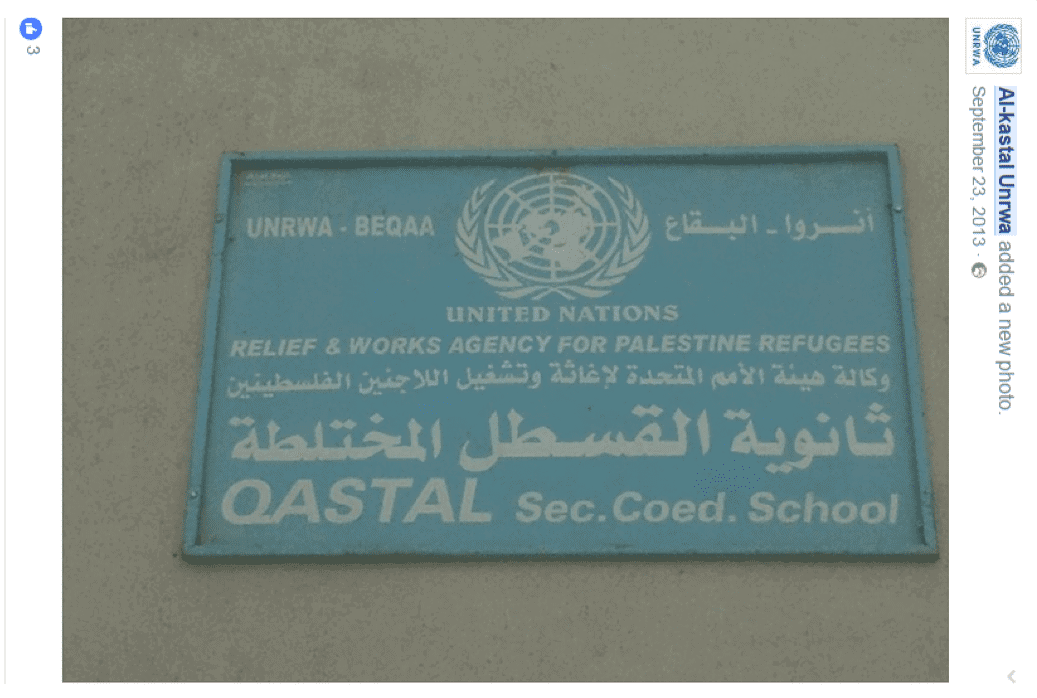 The al-Qastal Facebook shows a wall-painting, in what appears to be a courtyard within the school’s walls, that erases Israel from the map. Image 9. 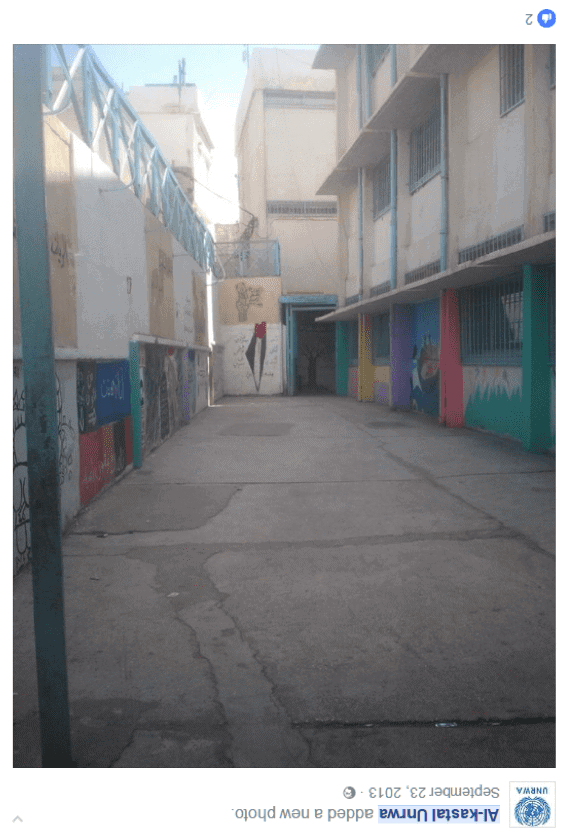