UNRWA’s Nazzal Prep Boys School in Amman, Jordan has a publicly viewable group on Facebook with 610 members. Teachers and students regularly post communication about the school, including documents such as lesson plans and class rosters.

Disturbingly, however this UNRWA group also posts incitement, including images of: (1) A “Nakba Day” rally at the school, in which there is a call to “cleanse their land from the freak stench of Zionism”; and images of a large mural on the school premises that erases Israel from the map.
Nazzal Prep Boys School Facebook group: https://www.Facebook.com/groups/Nazzal.prep.boys.no1/

An image posted in UNRWA’s Nazzal School Facebook group shows a Nakba Day rally at the school which calls for their land to be “cleansed” from the “freak stench of Zionism.” Image 1

An image posted in UNRWA’s Nazzal School Facebook group glorifies a masked Palestinian terrorist with a weapon. The name “UNRWA” is written vertically on the image. At least 17 students and teachers within the community “liked” the photo. Though at least 600 UNRWA administrators and employees would have seen this incitement to violence in the name of UNRWA, none spoke against it or caused it to be removed. Image 2

A photo from the Nazzal Facebook group shows a mural that completely erases Israel from the map, contradicting UNRWA’s promise to teach Palestinians peace and co-existence with Israel. Image 3 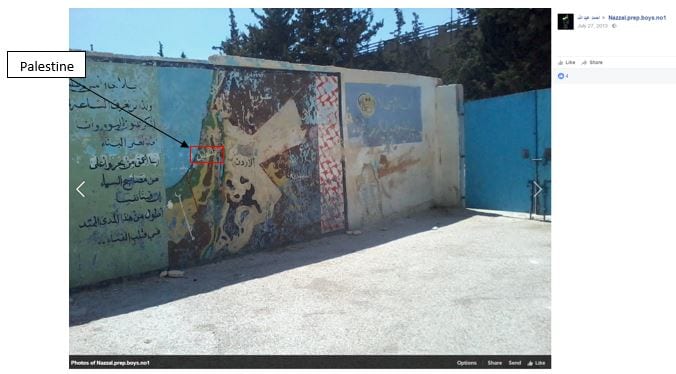 With some irony, the gate to the Nazzal school reads “UNRWA: Peace Starts Here.” Image 4