Ten Years Later: Is the UN Human Rights Council
Living Up to Its Promise?

Ten years later, we ask: Is the Council living up to its founding promise? Let us listen to the voices of the victims. We heard them two weeks ago at the 8th Geneva Summit for Human Rights and Democracy, organized by UN Watch and more than 20 other NGOs.

We heard from Darya Safai of Tehran, who testified that “the life of women in the Islamic Republic of Iran is imbued with discrimination. A woman is not allowed to work, study or travel without her husband’s permission.”

We heard from Ensaf Haidar, whose husband Raif Badawi was sentenced by Saudi Arabia to 10 years in prison and a thousand lashes. His crime? Creating a website to promote freedom.

We heard from Jigme Golog, a Tibetan monk who testified of being arrested and tortured by Chinese authorities.

We heard from 24-year-old Antonietta Ledezma of Venezuela, whose father Antonio Ledezma, the Mayor of Caracas, was arrested without warrant last year, in a violent raid on his office and jailed. He now faces 26 years in prison under trumped-up charges.

We heard from Rosa Maria Paya of Cuba, whose father Oswaldo Paya, the leading democracy dissident in that country, was killed under circumstances that have never been properly investigated.

We heard from Iraqi MP Vian Dakhil, whose fellow Yazdi women and girls are being captured by ISIS, sold as slaves in Iraq and Syria, and subjected to mass rape.

We heard from Polina Nemirovskaia, about repression in Russia; and from Turkish journalist Orhan Kemal Cengiz, whose newspaper Zaman was just violently seized by the Erdogan government.

And so Mr. President, we ask: Why are there no resolutions at all—zero—for human rights victims in China, Russia, Cuba, Saudi Arabia, and Venezuela? Why, on the contrary, are those governments elected members of this Council?

Why are there no urgent sessions on gross and systematic rights abuses in Iran, Iraq, Syria, or Turkey? 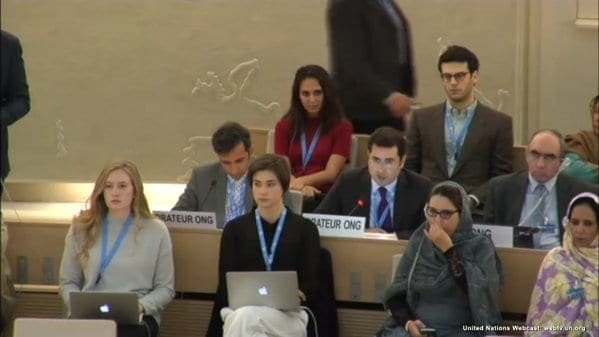 President: Point of order has been asked.

Cuba: Thank you, Mr. President. President, we’re taking the floor to raise a point of order here. At no time have we been able to understand clearly what has been said by the representative of this alleged NGO. At no time, given the Human Rights Council mandate, a represenative of an NGO cannot question the membership of a state that belongs to this council. They cannot do that. So I would ask you, Sir, to to call to order the representative of this supposed NGO. I know he’s going to carry on talking in this council, that’s not a problem for us, but I ask you to call him to order. But he should not refer to this — namely, whether a country may be a member of this council. You may have a diverging opinion, but you don’t have a mandate here to refer to that. Thank you.

President: U.S. has the floor.

USA: Thank you, Mr. President. We wold like to highlight that the United States firmly believes that accredited NGOs should be permitted to speak in the Council, though member states including the United States may occasionally disagree with the content of their statements—and an NGO just criticized us about four speakers ago—it is essential that civil society voices be heard here in an atmosphere of open expression. We believe the content of this NGO was relevant to the issue under debate, and as a result the Council should allow it to continue to finish their statement. Thank you, Mr. President.

President: I give floor to the distinguished representative of Venezuela.

Venezuela: Thank you, Mr. President. We would also like to suppport the point of order raised by Cuba. I think it’s a very pertinent one. I think the representative of the political organization needs to be called to order. So-called NGO. And as the Cuban delegate said, no NGO can, if you like, point fingers at the membership of the states who represent the Council. So again, we need to restate clearly our support to Cuba on this.

President: Is Cuba asking for another floor? You have the floor.

Cuba: Thank you. Just a clarification. We’ve seen that the U.S. delegate referred to the fact that we’re not letting people talk in this Council. Namely in the terms that have been mentioned by the NGO. We’re not having problems with the criticism as such, it’s an NGO on the topic itself, the issue itself, can an NGO actually refer to membership of a state in this council, that’s my point. I certainly didn’t say that we don’t want them to talk, I simply wanted to draw attention to that particular point.

President: I give the floor to the distinguished representative of China.

China: Mr. President, the Chinese delegation supports the response made by Cuba and Venezuela. We believe also that NGO representatives have no right to challenge the membership of states in the Council. Thank you.

Russia: Thank you, President. We agree with the arguments expressed by Cuba and Venezuela and China, and we would also ask you to call upon the distingushed NGO, which not for the first time has been highlighted and corrected in this, to correct their statement.

President: I now give floor to the distinguished representative of the Netherlands.

Netherlands: Thank you, Mr. Chairman. The Netherlands feels that sometimes we may disagree with what NGOs say in their statements, but we find it important that accredited NGOs participate in the consultations of this council. And as our minister said in the high level segment, the members of the Council especially are held to a high standard, and that is also what the council has laid down in its founding documents. Thank you very much.

President: I now give the floor to the distinguished representative of Pakistan.

Pakistan: Thank you, Mr. President. My delegation would like to support the point of order made by Cuba. While NGOs shoud have the right to express their views, they should not be allowed to question the membership of the Human Rights Council.

President: I now give the floor to the distinguished representative of United Kingdom.

United Kingdom: We would like to reiterate the comment that has already been made by the U.S. and the Netherlands that while we may not agree with all comments made, we support the right of accredited NGOs to make them. Thank you.

President: I now give the floor to the distinguished representative of Canada.

Canada: Thank you, Mr. President. Canada firmly believes that accredited NGOs must be permitted to speak at the Council. We may occasionally disagree with the statements we hear in this chamber, whether from NGOs or from other states, but it is essential to respect the Council’s emphasis on open dialogue. This is a question of freedom of speech. And civil society voices should be heard here in an atmosphere of respectful exhange. In this case we are of the opinion that we have heard in the intevention so far, without endorsing the substance of the statement, is pertinent to the subject matter of the Council, Session 31, Item 3. Mr. President, we respectfully ask that you rule that the speaker be allowed to finish his presentation. Thank you.

President: Any other request for the floor? I see none. I now give floor back to the representative of the NGO ask him to take into consideration the various comments made.

(3 seconds left on the clock)

Hillel Neuer, UN Watch: They can censor at home, but they cannot censor at the United Nations. Thank you, Mr. President. (Applause)

President: Cuba, you have the floor.

Cuba: I was referring to this NGO, it’s a lack of respect, and you yourself asked this NGO one thing, and he didn’t respond to that.

Cuba called a point of order, supported by Venezuela, Russia, and China. US, Netherlands, UK, Canada spoke up in support of @UNWatch #HRC31

.@UNWatch speaker then closed: "They can censor us at home, but they cannot censor us at the United Nations." Cuba again complained. #HRC31

‘Algeria, where are your Jews?’ – Hillel Neuer at U.N. human rights council