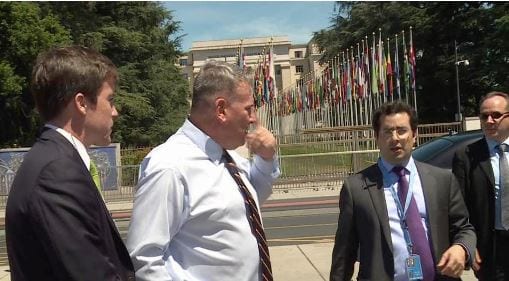 GENEVA, July 1 – The EU should adopt a principled position and oppose a PLO-drafted resolution that, when passed on Thursday or Friday, will endorse the UNHRC’s new Gaza report, which American and British military experts told the UN this week was seriously flawed. Thousands have already signed an online petition urging the leaders of the UK, France and Germany to oppose the Islamic-sponsored initiative.
“As predicted, the one-sided draft resolution that is the outcome of the Schabas-Davis inquiry condemns Israel while omitting all mention of Hamas,” said Hillel Neuer, executive director of UN Watch, a NGO in Geneva that measures the performance of the UN by the yardstick of its charter.
“With an automatic majority of Arab and Islamic states, joined by other dictatorships who sit on the council like China, Russia, Cuba, Vietnam and Venezuela, this text will become the HRC’s 62nd resolution against Israel — more condemnations than the council has enacted on the rest of the world combined.” Click here for statistics.
“When a country produces a UN reaction that is out of proportion, and to this extreme degree, then in all likelihood the reaction of the world body is based on something else altogether,” said Neuer.
See below brief UNHRC plenary speeches by Col. Kemp, Maj. Gen. Jones, and Lt. Col. Corn; followed by links to longer presentations at UN side event.
The thrust of the Schabas-Davis report, named after the law professor and occasional PLO legal consultant who initiated and headed the probe for six months and the judge who completed it, is that Israel’s political and military leaders (together with Hamas terrorists) should be investigated and prosecuted for “possible war crimes” in international tribunals, as well as in domestic courts worldwide.
UN Watch and NGO Monitor released an alternative report to the UN’s Gaza inquiry, entitled Filling in the Blanks.
Below are remarks from Monday’s vitriolic UN debate — followed by the interventions of military experts. 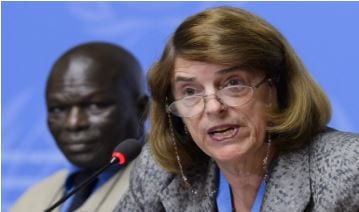 Mary McGowan Davis, Chair of Commission of Inquiry:
“Let me now turn to our key findings. First, the attacks by the IDF on homes and families…”
“The strikes may have constituted military tactics reflective of a broader policy, approved at least tacitly by decision-makers at the highest levels of the Government of Israel… Current accountability mechanisms may not be adequate to address this issue… The parties should cooperate fully with the preliminary examination of the International Criminal Court and with any subsequent investigation that may be opened.”
Saudi Arabia: “Israel is the worst racist regime in the world. Israel is the biggest violator of human rights in the world. The case must be referred to the ICC for crimes against humanity.”
State of Palestine: “We examined the report, and we can now say it is balanced to a great extent… Israeli leadership… deliberately planned this barbaric aggression.”
Algeria for the African Group: “We urge the government of Israel to take all necessary measures to put an end to the impunity that prevails currently.”
Tunisia on Behalf of the Arab Group: “We condemn the barbaric aggression against the besieged and occupied Palestinians… The report shows the need to establish accountability to investigate violations during this Israeli aggression.”
Pakistan for the Islamic Group: “These attacks were result of a broader policy conceived by higher echelons of the Israeli government…”
Iceland: “No one cannot stay immune to the suffering of the Palestinian people in Gaza.”
Ireland: “We commend the Commission of Inquiry’s work despite serious onstacles put in their way. Ireland regrets Israel’s decision not to cooperate. The right to self defense does not give confer Israel carte blanche to act with disproportionate force. This is a serious and conscientious document, balanced, sober, and reasoned.”
Venezuela: “The inquiry demonstrated that Israeli armed forces once again acted as a terrorist organisation, by deliberately attacking civilians with the intention of murdering them… Criminal responsibility for those whjo perpetrated this genocidal attack.” 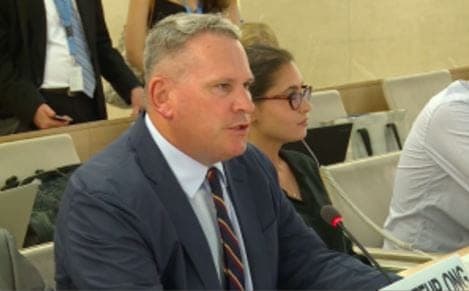 Mr. President,
I fought in combat zones around the world during 30 years’ service in the British Army. I was present as an observer throughout the conflict in Gaza.
Mr. President, during the 2014 Gaza conflict, Hamas, to its eternal shame, did more to deliberately and systematically inflict death, suffering and destruction on its own civilian population, including its children, than any other terrorist group in history.
Hamas deliberately positioned its fighters and weapons in civilian areas, knowing that Israel would have no choice but to attack these targets, which were a clear and present threat to the lives of Israel’s own civilian population.
While the IDF made efforts, unprecedented in any other army, and exceeding the requirements of the laws of war, to save Palestinian civilian lives, including warning them to leave target zones, Hamas forced them to remain in those areas.
Unable to defeat Israel by military means, Hamas sought to cause large numbers of casualties among their own people in order to bring international condemnation against Israel, especially from the United Nations.
This was the cornerstone of Hamas’s strategy. It was Hamas’s strategy, not illegal Israeli action, as this report shamefully alleges, without a shred of evidence, that was the reason why over 1,000 civilians died in Gaza.
By denying this truth, and by refusing to admit the manifest reality that the conflict in Gaza was caused by Hamas’s war of aggression against Israel, this report faithfully reiterates Hamas’s own false narrative.
This council has for too long allowed itself to become a tool of Hamas’s murderous strategy. By unjustly condemning Israel, by refusing to condemn Hamas’s repeated and unprovoked aggression, this council has consistently validated and encouraged Hamas’s tactics.
I urge all delegates to this council to reject this report. Failure to do so amounts to support of Hamas terrorism and will result in further rounds of violence in Gaza and Israel. The price for that will be paid in the blood of the people of Gaza and Israel.
Thank you, Mr. President. 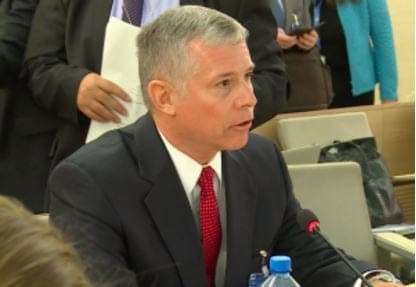 Mr. President,
My name is Mike Jones, a retired U.S. Army general officer who, with four other retired U.S. generals, conducted a JINSA-sponsored, but independent, study of the 2014 Gaza conflict. We conducted research, and interviewed Israeli, UN, and Palestinian Authority officials. Our focus was what the U.S. should learn from the conflict, but our report is relevant to the Council.
I am pleased your report acknowledged that all combatants are required to abide by the law, and that Hamas’ and other groups’ indiscriminate rocket fire at Israel was unlawful.
However, it is disappointing that the report fails to condemn these groups for unlawfully failing to distinguish themselves as combatants, as well as purposefully co-locating amongst civilians, knowingly placing them at risk, with absolutely no military necessity to do so.
I am also disappointed that the report, while acknowledging that lawful targeting is a balance between the military necessity and the known risk to civilians, came to conclusions without sufficient information to make a judgment. Specifically, they condemn the IDF for engagements without any information on the IDF’s objectives, military necessity, or known information on risk.
Our team did have access to much of that information. We concluded that the IDF consistently applied lawful criteria in their targeting. Conversely, we concluded that based on verifiable information on the launch sites, weapons and ammunition storage, command locations, and the trajectories of fired weapons, that Hamas habitually violated the law by attacking civilian targets with no military value, and deliberately placing Gazans at risk without military necessity.
It is also disappointing that none of the Commissioners had military experience, nor did they use the studies that we and other military professionals who do have experience in conducting lawful combat operations have published.
Thank you Mr. President. 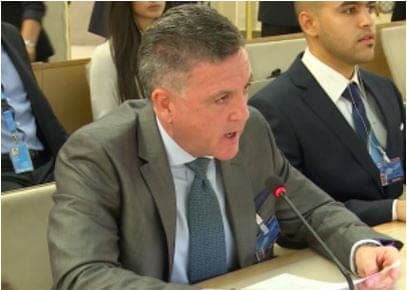 Thank you, Mr. President. I am Geoffrey Corn, a Professor of Law and the U.S. Army’s former senior expert on the Law of Armed Conflict. I advised an independent JINSA-commissioned Task Force on the 2014 Gaza conflict.
I commend the Report’s recognition that all parties to armed conflict must implement and respect the Law of Armed Conflict. While objective critiques of military operations can contribute substantially to the understanding, implementation, and evolution of the Law of Armed Conflict, findings and recommendations must derive from credible information, legal interpretation, and operational expertise. Otherwise, any critique risks distorting the essential balance between mitigating the suffering of armed conflict and the dictates of military necessity – one that has defined the law since its inception.
I believe the Report lacks this foundation. First, it treats questionable interpretations of this law as conclusive, and fails to apply the principle of distinction comprehensively. Specifically, it omits assessment of how an enemy’s systemic failure to distinguish himself from civilians, and deliberate exploitation of the perception of civilian status, impacts the reasonableness of attack judgments.
Second, the Report reflects common but invalid tendencies toward “effects based” condemnations of targeting judgments. Combat effects are relevant when considering compliance with the Law of Armed Conflict, but cannot substitute for recreating the context of attack decisions to determine whether they were reasonable. Limited access to operational information may make this process difficult, or even impossible, but does not justify substituting effects as the touchstone of legality.
Third, the Report is not based on credible military operational expertise. This is exacerbated by the tactical context of close combat in an urban environment against an enemy deliberately refusing to comply with its distinction obligation. The Report’s judgments regarding military advantage are attenuated from the true nature of military operations, therefore undermining the credibility of ultimate legality assessments.
Thank you, Mr. President.

The main response at the UN to the Gaza report was delivered on live webcast in a packed hall inside the UNHRC building in front of diplomats, major media and human rights activists. Full video of the 2-hour panel is here.
Moderator: Hillel Neuer, Executive Director, UN Watch
Panel I: Contributors to Alternative Report, Filling in the Blanks.