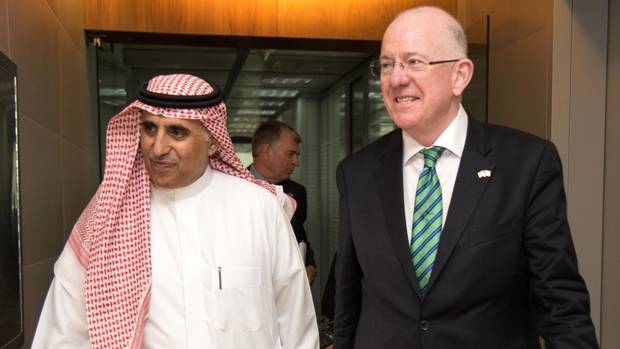 April 19, 2017 – the UN Economic and Social Council issues press release announcing Saudi Arabia’s election to the Commission on the Status of Women.
April 22, 2017 – UN Watch publishes statement on its website condemning election of Saudi Arabia to Commission on the Status of Women: No Joke: UN Elects Saudi Arabia to Women’s Rights Commission.
As of April 29, 2017, after the Belgian Prime Minister apologized, the UK Foreign Office still refused to disclose how it voted, as reported by The Independent. Similarly, as of April 27, 2017, Ireland would not disclose how it voted citing the secret ballot rules, as reported by CNS News.

Minister for Foreign Affairs Charlie Flanagan has again insisted he will not reveal how Ireland voted in a United Nations vote electing Saudi Arabia to a major body on human rights.

He was speaking in the Dáil on Thursday after Government partners, the Independent Alliance, had called on him to say how Ireland had voted.

Mr Flanagan said since 1947 the rules of procedure for general assembly elections provided they were held by secret ballot.

“We do not publicly disclose our voting intentions or our voting decisions,’’ he added.

“That is normal diplomatic practice and it is widely considered a fundamental aspect of the conduct of sensitive international relations.’’

Irish opposition MPs are critical of the Government: (click here for parliamentary transcript)

Mr Flanagan said he was not aware of any member state which, as a matter of practice, publicly revealed how it voted.

“It allows for the good functioning of the United Nations which is made up of member states with very different views and very different political backgrounds,’’ he added.

The Minister was replying to Independent TDs Mick Wallace and Clare Daly.

Mr Wallace said [quoting the director of UN Watch] that electing Saudi Arabia to protect women’s rights was like making an arsonist the town fire chief.

He said Saudi Arabia was engaged in genocide in Yemen and had caused a humanitarian disaster, while Ireland engaged in trade with them.

Ms Daly said Irish people were absolutely outraged at a country infamous for the subjugation of women being given a place on the monitoring body.

Mr Ross and Mr McGrath said they would raise the issue at the Cabinet meeting next week.

Mr O’Brien had said: “We deserve an answer. Does this send the message that Ireland supports Saudi Arabia and their treatment of women?” he asked.

“We’re not going to allow this to be swept under the carpet,” he told RTÉ’s Today with Sean O’Rourke programme.

“People need to know. People will be disgusted and outraged if they find that we facilitated Saudi Arabia getting a seat on the commission.

“If Ireland stays silent on this, it says they no longer support the 50 per cent of the population of Saudi Arabia who cannot control their own lives.”

Split in the Irish Government:

Mr Flanagan has said it would be “very damaging to Ireland’s ability to conduct international relations” if he revealed the Government’s voting preference.

However, sources in the Independent Alliance suggested that it could be damaging for Government relations if he does not reassure the public.
The Irish Independent understands that the vote was never discussed at Cabinet – and other ministers were unaware that it was even taking place.

But Transport Minister Shane Ross and Disabilities Minister Finian McGrath both intend to raise the issue during the Government meeting next week.
Mr Ross said it would be “preferable” if the public knew where the Government stood on the issue.
Their colleague John Halligan went further, saying there was “no question” in his mind that the rights of women are being violated in countries like Saudi Arabia.
“We should not tolerate that,” he said.

A spokesperson for the Saudi Arabian Embassy in Dublin said that “incorrect and untrue information” was being spread. He said the embassy would not confirm whether it had lobbied for an Irish vote.
The spokesman told this newspaper its “candidacy for membership of the Commission between 2018 and 2020 comes from the Kingdom’s leading role in strengthening the role of women”.

The spokesman for the Saudi Embassy rebuffed any criticism, saying its country has taken “great steps in promoting the rights of women, guaranteed by Islamic laws before the existence of international conventions, which aim at empowering women as fundamental and active members of society”.

Speaking in Montreal, Mr Kenny made it clear he would not reveal how Ireland voted.
“This is an issue which concerns us greatly, he said.
“It has always been the convention not to indicate the nature of the vote at the United Nations.
“I am sure Geraldine Byrne Nason will do a superb job of persusing the issue of women’s rights when she becomes our Ambassador to the United Nations.”