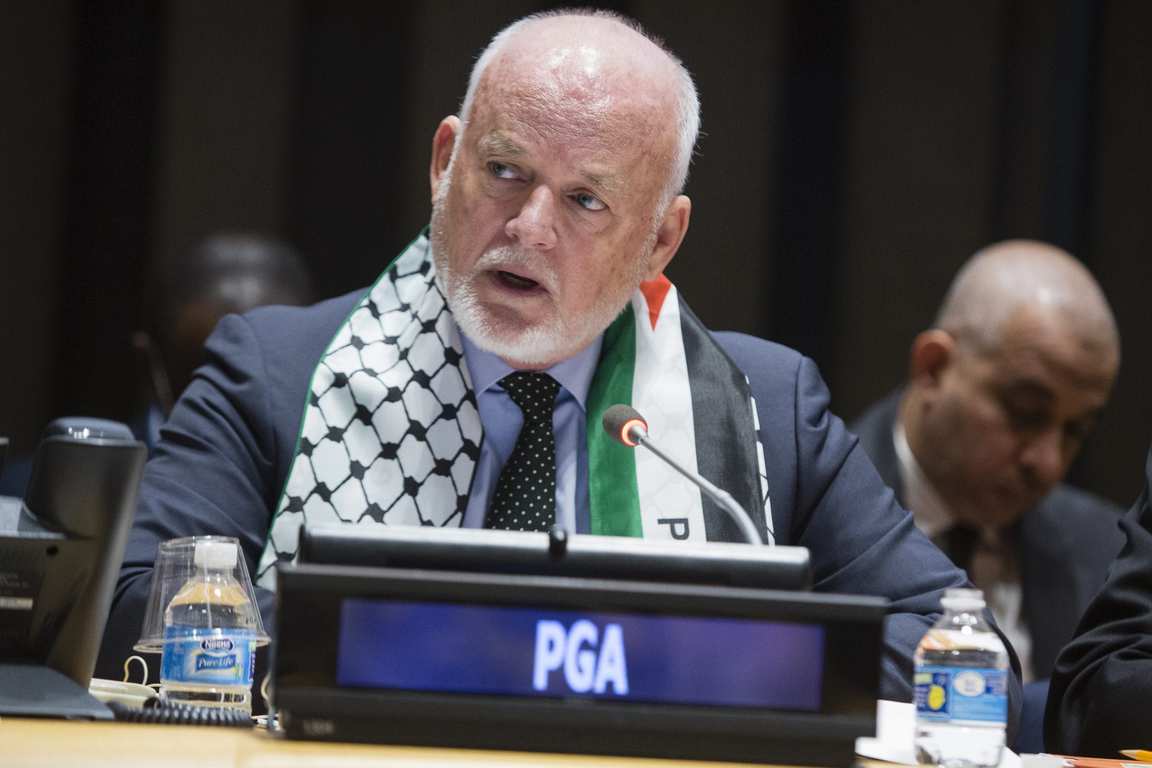 Peter Thomson, president of the UN General Assembly, doesn’t even try to appear impartial as he wears the Palestinian flag around his neck, addressing the UN’s “International Day of Solidarity with the Palestinian People.”

GENEVA, Dec. 21, 2016 – As the UN General Assembly prepares to adopt a resolution today accusing Israel of harming Palestinians by the “exploitation of natural resources,” “extensive destruction of agricultural land” and “widespread destruction”—part of 20 anti-Israel resolutions adopted in the annual session that concludes this week—UN Watch released a list of the “Top Ten Most Egregious UN Anti-Israel Actions of 2016.”

10. UN Secretary-General Ban Ki Moon singled out Israel for unprecedented criticism in a New York Times op-ed, doubling down on a lopsided Security Council speech in which he justified Palestinian terror against Israeli civilians by saying, “it is human nature to react to occupation.”

8. In a new Palestinian-led bid to use the UN to wage a global BDS campaign, the UN Human Rights Council voted to create a special blacklist of companies doing business with Israeli residential communities over the 1949 Green Line, including in the Jewish Quarter of Jerusalem.

7. Canadian law professor Michael Lynk was appointed as the UN’s “impartial” investigator of alleged Israeli human rights violations—even though his application deceptively failed to disclose his long record of anti-Israel lobbying, or his board membership on three pro-Palestinian organizations including Friends of Sabeel and the National Council on Canada-Arab Relations.

6. The UN’s World Health Organization (WHO) singled out Israel as the only violator in the world of “mental, physical and environmental health.”

5. The UN’s ILO effectively singled out Israel as the world’s only violator of labor rights, through its production and debate of a massive report—to which no other country is subject—on “the situation of workers of the occupied Arab territories, including the occupied Syrian Golan.” Meanwhile, the plight of Syrians suffering in Syria was ignored.

4. When Palestinian men beat their wives, it’s Israel’s fault, argued UN expert Dubravka Simonovic, in a statement summing up her September visit to the Palestinian territories.

3. In its ritual scapegoating of the Jewish state each year, the UN General Assembly just adopted 20 one-sided resolutions against Israel, and only 4 resolutions on the rest of the world combined.

2. Not even trying to appear impartial, UN General Assembly president Peter Thomson wore a scarf of the Palestinian flag around his neck as he addressed a gathering to mark the UN’s “International Day of Solidarity with the Palestinian People.”

1. UNESCO negated its mandate to protect world heritage by adopting a resolution which used Islamic-only terms for Jerusalem’s Temple Mount, the holiest site in Judaism, denying thousands of years of Jewish and Christian heritage, religion and culture.