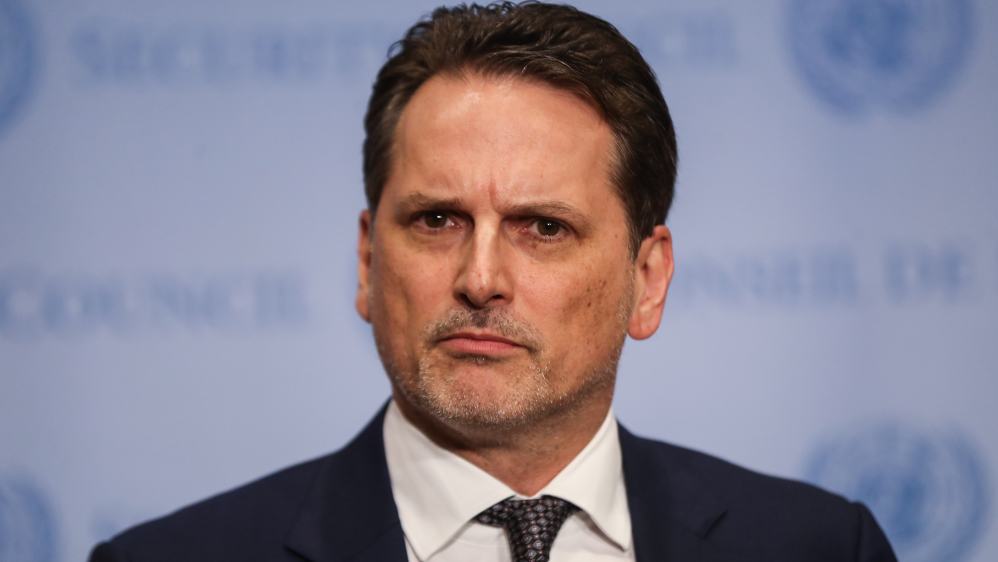 GENEVA, July 31, 2019 — International human rights group UN Watch is demanding that UNRWA chief Pierre Krähenbühl resign from his post, in wake of an internal UN ethics report documenting credible and corroborated allegations of sexual misconduct, nepotism and corruption by the former Red Cross official and his inner circle.
Top officials are now resigning from UNRWA, the UN relief agency for Palestinians, or being forced out. Facing questioning from UN investigators, Deputy Commissioner-General Sandra Mitchell and Chief of Staff Hakam Shahwan quit earlier this month. Deputy Head of Human Resources Nadine Khaddoura, implicated in nepotistic appointments, “had to be escorted from her office under vociferous protest” when confronted with the results of the UN investigations, reports Ian Williams.
But Krähenbühl is refusing to step down, despite evidence of serious abuse of power gathered from some 25 current and past UNRWA directors and staff.
In 2014 Krähenbühl allegedly “took a particular interest” in UNRWA employee Maria Mohammedi, who starred with her husband Rashid Abdelhamid in the Palestinian film Condom Lead. Krähenbühl conducted a relationship with Mohammedi that “went beyond the professional,” fast-tracked her appointment as his “senior advisor,” and flew her around the world with him “using his authority to obtain waivers enabling her to travel business class with him,” despite UN rules restricting such privileges.
Mohammedi’s position was funded by the Swiss government, a major supporter of Krähenbühl, the only Swiss citizen currently heading a UN agency. The Swiss today announced they were freezing all funds to UNRWA, as did the Netherlands.

CLICK HERE FOR MORE INFORMATION ABOUT THE SCANDAL
Statement by UN Watch
UN Watch executive director Hillel Neuer issued the following statement: “Never before has a UN agency of this size been hit with such a devastating indictment of its senior leadership. Today we call on UNRWA’s top donors—including the EU, Germany, Britain, Sweden, Norway, the Netherlands, Canada, Spain and Australia—to exercise their basic oversight responsibility and demand accountability from the agency’s highest officials. Krähenbühl must leave now, along with all other UNRWA personnel who violated the UN’s own minimal professional standards.”
“Regrettably, years of no-questions-asked funding for the agency by Western governments created a vacuum of oversight, enabling a culture of impunity that saw the  abuse of power by Krähenbühl and his colleagues.”
“Former U.S. Ambassador Nikki Haley should be applauded for having the foresight last year to end America’s unconditional support for the corrupt agency. Now Switzerland and the Netherlands are rightly following suit,” said Neuer.
In recent years, UN Watch has revealed other systemic problems plaguing the UN’s Palestinian refugee agency. In 2017, UN Watch released a 130-page report detailing dozens of alarming cases of UNRWA school teachers in Gaza, Lebanon, Jordan and Syria whose Facebook pages incite to Jihadist terrorism and antisemitism. Many dozens of UNRWA staffers were found to regularly post Holocaust-denying videos and pictures celebrating Hitler. Later that year, a follow-up report by UN Watch revealed an UNRWA poetry contest in which teachers praised a student dressed as a “martyr” and wielding a knife in class.
As a result, then-Swiss FM Didier Burkhalter told the federal parliament that the Swiss government “condemns in the strongest terms” the incitement by UNRWA employees of “racist and anti-Semitic messages over social networks,” as documented by UN Watch.
UN Watch also exposed UNRWA faking a fundraising campaign by using a photo of a girl in a bombed-out Syria building, claiming her to be the victim of Israel in Gaza. Additionally, UNRWA was forced to delete a tweet praising a PFLP terrorist after UN Watch protested.
“For years we have exposed UNRWA’s failings, but donors like the EU, Germany, the UK and others turned a blind eye to agency misconduct, refusing to utter a word of public accountability. This created a culture of impunity, and, sadly, UNRWA’s latest scandal comes as no great surprise,” added Neuer.

Dominoes are starting to fall. Among democracies now blindly sending our tax money to corrupt and malign UNRWA, who will be next to freeze funding?