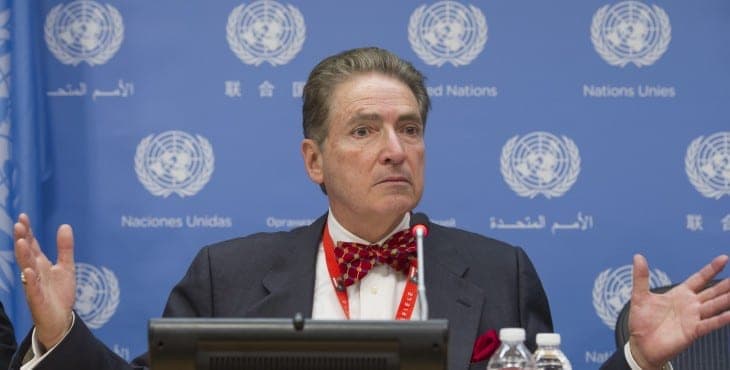 Alfred de Zayas, UNHRC’s “Independent Expert on the promotion of a democratic and equitable international order.”In September 2018, Venezuela’s Maduro regime was legitimized in an official expert report by Alfred de Zayas, the UN Human Rights Council’s “Independent Expert on the promotion of a democratic and equitable international order.” As UN Watch warned during Zayas’ visit to Venezuela — when he posted propaganda photos pretending that starving Venezuelans actually had an abundance of food — his outcome report was a complete whitewash of Maduro’s crimes, where the term “political prisoner” appears nowhere, and where dissident heroes like Leopoldo Lopez and Antonio Ledezma are condemned as warmongers. According to Zayas’ report, the guilty ones in Venezuela are not Maduro and his minions, but rather “the World Trade Organization, the World Bank, the International Monetary Fund, transnational corporations and some lobbies like the military-industrial-financial complex,” as well as “bilateral investment treaties, free trade agreements, credit rating agencies, vulture funds, boycotts and unilateral coercive measures.” Madura gets a free pass, because, per Zayas, it’s a “democratically elected government” that “possess legitimacy” and “only they can effectively protect the human rights of persons under their jurisdiction and implement change.” The solution to Venezuela’s catastrophe lies in “good faith negotiations between the Government and the opposition, an end to the economic war, and the lifting of sanctions” against Maduro’s criminal regime. Amnesty International and Human Rights Watch, the most influential NGOs in the UN human rights system, refused to criticize Zayas.

In January 2018, the UN elected Turkey’s Erdogan regime — which arrests, jails & persecutes human rights activists, journalists, and dissidents — as Vice-Chair of the UN Committee on Non-Governmental Organizations, which accredits and supervises the activity of human rights groups at the UN.

8. Cuba Allowed to Cheat on UN Rights Review, With Hundreds of Fake Submissions

In May 2018, Cuba mocked the mandatory UN review of its human rights record by submitting hundreds of fake NGO submissions hailing the repressive regime’s human rights record, including from the “Cuban Federation of Canine Sports.” Cuba lashed out at UN Watch for exposing the fraud, and at Freedom House for helping to organize testimony of human rights activists on the margins of the UN review, including Rosa Maria Paya.

Saudi Arabia elected as new member to the Executive Board of the United Nations Entity for Gender Equality and the Empowerment of Women. Saudi Arabia looks forward to working alongside our fellow members starting in January 2019 pic.twitter.com/CZw8hgrxZN

In 2018, Saudi Arabia, considered by many to be the most misogynistic regime in the world, secured key positions on the UN’s three principal women’s rights bodies. First, in March 2018, Saudi Arabia took its seat on the UN Commission on the Status of Women—made possible by the votes of Belgium, Ireland and Sweden—thanks to an election the year prior, as exposed by UN Watch. Second, in April 2018, Saudi Arabia was elected to the Executive Board of UN Women, also known as the UN Entity for Gender Equality and the Empowerment of Women. Third, in June 2018, Saudi Arabia’s candidate won a seat on the UN Committee on Elimination of Discrimination Against Women, a 23-member expert body that monitors implementation of the Convention on the Elimination of All Forms of Discrimination against Women, reviews country reports and adopts recommendations, receives complaints from individuals or groups concerning violations of rights protected under the Convention, initiates inquiries into situations of grave or systematic violations of women’s rights, and formulates general recommendations regarding the Convention.

Of my 42,000 followers here, hundreds are UN officials, ambassadors & NGO activists. As we begin Day 5 of #IranProtests, are any of you aware of a single United Nations entity or official who has spoken out for the human rights of protesters arrested, beaten, tear-gassed & shot?

As 2018 opened in January, UN officials continued to ignore Iran’s violent crackdown against mass protests that had begun days earlier. UN Watch’s tweet asking whether any UN officials at all had spoken out in defense of Iran’s victims went viral with 9,000 retweets and 15,000 likes. Only later was UN rights chief Zeid al-Hussein shamed into issuing a statement calling on the Iranian authorities to respect the rights of demonstrators and detainees.

In October 2018, the UN broke its own rules by electing notorious human rights abusers to the 47-nation Human Rights Council. UN Watch exposed the scandal in a joint report with the Human Rights Foundation and the Raul Wallenberg Centre for Human Rights. The report was featured in a major article in The Guardian — entitled “Why are world’s worst violators joining UN human rights council?” — and was quoted by other newspapers around the world. UN Watch’s series of tweets about UNHRC membership were shared 9,000 times.

Reviewed today by the 🇺🇳 UN Human Rights Council, 🇸🇦 Saudi Arabia came with a large delegation to boast of their "promotion and protection of human rights of women," which has enjoyed "great development," and they have "adopted many measures to ensure equality of men and women." pic.twitter.com/vbV0eF8RyR

When the UN reviewed the human rights record of Saudi Arabia and China — which Human Rights Watch’s Ken Roth promised would be “tough probing” — the supposed audit in fact consisted of widespread praise for their human rights record. Saudi Arabia won praise from 75% of the delegations, while China topped that by winning praise from 86% of the speakers during its review. UN Watch exposed the process as a fraud, as reported in The Washington Times:
“U.N. praises Saudi Arabia on women’s rights.”

Chinese propaganda at UN Human Rights Council today, as their record this week was reviewed (86% of reviews were praise). So I asked the Chinese lady giving out the swag if this USB key will send China info from my computer. "I don't think so… it doesn't usually work that way." pic.twitter.com/9Osk1XDuEt


In October 2018, UN Human Rights Council “expert” Idriss Jazairy — a former Algerian ambassador to the UN — presented a report to the General Assembly  in which he protested a “knowledge embargo” barring Iran and North Korea from sending their people to study nuclear physics in Europe. He didn’t seem to mind that both countries, which have threatened annihilation toward others, have been condemned for illegal actions to build a nuclear bomb. In his oral presentation, he spoke out on behalf of Belarus, Cuba, Iran, North Korea, Qatar, Russia, Sudan, Venezuela, Zimbabwe, Yemen and Syria, arguing the regimes were victims of human rights abuses as a result of Western sanctions. Earlier in the year, in May, Jazairy issued a release after his visit to Syria —”at the invitation of the Syrian government” — arguing that the Assad regime was a particular victim.

In May, Assad’s Syria — a regime with a well-known propensity for using chemical weapons against its own people — assumed the presidency of the UN-backed Conference on Disarmament, which deals with the nuclear nonproliferation treaty, global conventions to ban biological and chemical weapons, and the comprehensive test ban treaty. UN Watch’s exclusive report and appeal sparked a global firestorm. The scandal arose in the U.S. State Department press briefing — provoking criticism by spokesperson Heather Nauert, the next U.S. ambassador to the UN — and was reported worldwide, including in The Associated Press, EFE Brasil, Daily Mail, Lalibre.be, de Volkskrant, Aftonbladet, ntv Nachrichten, Tagesspiegel, New York Post, CNSNews.com and RFE/RL. The opposition led by UN Watch led to results. While as a rule diplomats congratulate every country that chairs a UN session, even dictatorships, when Syria took the gavel in May, UN Watch’s campaign led to the U.S. walking out, and the regime getting condemned by the representatives of the EU, Britain, Germany, France, Canada and the Netherlands. The U.S. called on Syria to stand down, saying it had “neither the credibility nor moral authority to preside over the Conference on Disarmament.” Britain “deplored” Syria’s presidency. Germany said Syria had “no credibility whatsoever to carry out the presidency.”